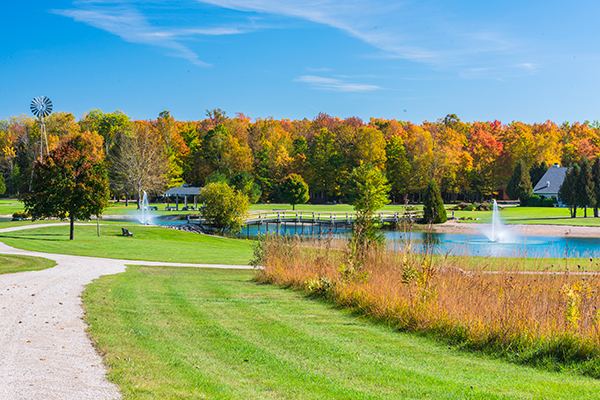 The pond at Heritage Lake Resort is stocked with fish. Photo by Len Villano.

For nearly a century, the typical Door County vacation home was a simple cottage on a piece of prime real estate. Rarely winterized, they had small, basic kitchens and sparse living rooms. Those coming to the peninsula, after all, were coming in July and August to take advantage of the cool breezes off the lake and bay.

In the 1980s that changed. The condo craze came to the Door in full force, soon followed by the clamor for McMansions atop the bluffs, nestled in the woods, and plopped in the middle of former farmland. Americans wanted more space, even in their homes away from home, and when it became more popular to visit Door County in the shoulder seasons, people needed indoor options for days when weather didn’t cooperate with vacation plans.

In the midst of that change a development was created in Egg Harbor that went the other direction, hanging on to the cottage aesthetic in a relatively unknown development tucked into a quiet road a mile outside of the village.

The four-season Heritage Lake Resort was built in 1993 on an old gravel quarry at the corner of Harbor School Road and Elm Road (now Heritage Lake Road). There is a clubhouse and small man-made lake visible from the road, but the casual passerby would never know there are 230 small homes on 80 acres tucked into the woods.

“There’s no point where you feel like there are 250 people here,” said Bob Buksyk, a seasonal resident at Heritage Lake since 2005 and the association’s marketing chair.

The pond at Heritage Lake Resort is stocked with fish. Photo by Len Villano.

Owners at Heritage Lake say the interiors of the homes are more spacious than you’d expect. Photo by Len Villano.

A standard home at Heritage Lake is just 350 square feet, but most residents add a 400-square-foot room to reach the maximum 750 square feet. Photo by Len Villano.

The Fabry children plan in the loft of their home at Heritage Lake. Photo by Len Villano.

Laura and J.R. Fabry with children Emerson and Lawson. Photo by Len Villano.

Homes start at just 350 square feet, a far cry from the size of the average home built in the United States today, 2,600 square feet. Since the homes arrive on wheels, they’re technically considered an RV for zoning purposes, but once parked they look and feel very much like a traditional, but small, home. Many residents add a 400-square-foot room to bring the total area to 750 square feet. The homes are far from cookie-cutter. Some have the look of a log cabin, others are decorated like a beach cottage.

Ken Pabich, president of the Heritage Lake Homeowners Association, has owned at Heritage Lake for nine years and said the decision to buy came as part of a natural vacationer’s maturation.

“We are avid campers,” he said. “We started sleeping on the ground, then got a pop-up, and eventually got the itch for a bigger camper and stumbled on Heritage Lake.”

It started as a place for he and his wife to sneak away on weekends from their home in Green Bay, but they’ve held onto it since moving to Sturgeon Bay when Pabich took a job as Door County administrator, using it as a base to see more of the county.

Longtime owner Tom Stindle said people can make life what they want at the property.

“There’s a lot to do if you want to do it,” he said. “People organize gatherings at the clubhouse or drive golf carts around the grounds to visit friends. But it’s easy to keep to yourself if you want to as well.”

Nearly 25 years after it opened, the resort’s community is in transition. The first generation of buyers is aging and selling. Swanson said most owners are snowbirds, but that’s changing. Today Swanson says most of those buying into Heritage Lake are in their 30s and 40s, younger couples with kids who can get a slice of Door County relatively cheap at Heritage Lake.

J.R. and Laura Fabry of Green Bay are a perfect example. The 40-somethings have two children (ages 9 and 11), and bought a unit at Heritage Lake in 2014. They’ve missed three weekends at the resort since. They sold their first Door County condo when they had kids, but soon missed it, struggling to find hotel rooms.

“We loved it so much up here, but we couldn’t get up here when we wanted,” Laura said. They launched an exhaustive search for a new property.

“When we started to look, we wanted less responsibility and more fun,” J.R. said.

One of the reasons for the influx of young blood is the growing affinity for tiny houses. Virge Temme, a Sturgeon Bay architect who specializes in designing sustainable homes less than 2,500 square feet, said the tiny house movement is making an impact throughout the home-building industry.

“I think the recession gave everybody a wake-up call that we have so much more than we need,” she said. “Fifteen years ago, 30-somethings were convinced that they had to have a 3,000-square-foot home. I think they were looking back to their parents’ standards rather than looking to a realistic present and future. Now they’ve really started looking at what is valuable in life.”

Buksyk said he was struggling to get people to show up to open houses, but when he changed his advertising to include the phrase “tiny houses,” he immediately saw a big jump in open house attendance.

“When people see them, they fall in love,” he said.

For the Fabrys, the small footprint isn’t a hardship, it’s freeing.

“It’s kind of like a boat, where everything has its place and you live a lot smarter,” Laura Fabry said. “You find that you don’t actually need that much stuff up here.”

Instead of stuff, the Fabrys said their family has experiences. They hike, bike, swim in the on-site pool, and fish in the pond stocked with trout.

“At home, I’m doing laundry, the kids watch TV, my husband is working,” Laura said. “And now, we bike ride, we do things as a family. We take the opportunity to teach our kids about art, nature, and what life’s all about. We cross-country ski at Crossroads, sled up and down the street when it’s snowy. Owning this place has really changed our lives. We reconnect with our family, and sit and talk, do stuff families should be doing.”

At Heritage Lake their kids put away their gadgets and get excited for their new favorite entertainment.

“They love campfires,” J.R. said. “Until we started coming up here our kids hadn’t had a lot of exposure to campfires. When we bought this place, we started a tradition of playing music and telling scary stories around the fire. That’s what the kids look forward to.”