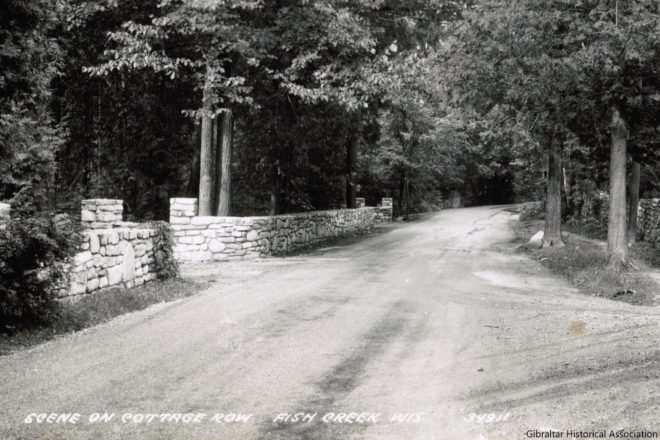 The north entrance to Cottage Row near Founders’ Square in Fish Creek. Photo courtesy of the Gibraltar Historical Association.

Fish Creek’s Cottage Row is among the few roads in Door County where it feels as if the clock stopped a generation or two ago, and we all get to watch from the road above the water. The narrow street’s thick canopy covers historic stone fences and old cottages that many of Wisconsin’s wealthiest and well-known occupied during the splendid months of summer.

“Mrs. Van Schroeder had a dog by the name of Thor,” McKesson said. “She had a checked dress, red and white, and a big hat, and she always wore gloves. Always. She’d get on her bicycle, and she pedaled down here [to Fish Creek], and she’d stop at The Summertime. She would quietly come in, pick up her Chicago paper, and ask for a vanilla ice cream cone. She would take about three licks off of it and go outside. She put her paper in the basket on her bicycle and went on up the hill. She did it every single day of the summer.”

McKesson, who is president of the Gibraltar Historical Association, repeated the word “elegant” as she remembered the older days of the Cottage Row elite from her own historical home in downtown Fish Creek. But before the quiet road and its elegant residents settled in, and well before the homes became among the most revered in the county, the land that Cottage Row sits on was little more than barren stone squeezed between water on one side and a bluff on the other.

Asa Thorpe, one of the first to develop Fish Creek’s tourism industry, had scalped the land of its lumber and then offered the land to the German-born doctor Herman Welcker, who turned it down. George Clark, president of the stove manufacturer Clark Jewel Company, took Thorpe up on his offer, and the Clark family built the first homes on what became a haven for the Midwest’s wealthy elite to escape the summer heat. Curly Lambeau, founder of the Green Bay Packers, was perhaps the road’s most famous resident when he purchased the Clarks’ first home on the north end of Cottage Row, nearest the town, in the 1950s. Other homes have been in the same family for five generations.

Until the early 1900s, what is today the winding hairpin road carving up the bluff was a simple logging trail used to transport goods from the Clarks’ homes on the water to their farm up on the bluff (where Lautenbach’s Orchard Country Winery is today). The residents of Cottage Row enjoyed the quiet solitude of a dead-end street where they could escape from the city and from Fish Creek’s bustling tourism industry. When the hairpin was paved, it quickly became a racetrack for motor enthusiasts and opened the road to more awestruck and envious passersby.

McKesson and her sister Nancy Sargent believed Cottage Row’s residents to be among the most passionate about the area’s preservation.

“They are a part of the history of the village and how things developed and why they developed,” McKesson said. “They respected the beauty of what this place offered and protected it.”

In addition to caring deeply about the land, these residents also embraced the neighborly community that they held so dear. Sargent received a scholarship from Agnes Ryan, a member of one of Cottage Row’s oldest families. A truck carrying all of the flowers and plantings for another Cottage Row home sent the thrill of summer’s return throughout the town. Local kids worked as housekeepers and landscapers for the road’s homeowners — work that offered a taste of the elegance that these families shared.

“One of the homes had this beautiful little play house, and it was like nothing else I had ever seen before,” McKesson said. It had a working fireplace, beachstone floors and real dishes. The sisters would ride their bikes down the road, cover the bikes in leaves and just sit quietly in the house — their very own Cottage Row home.

But time has swallowed some of the road’s beloved homes. New generations have lost interest or simply become too widespread to effectively maintain the homes as they once were. Lots have been sold off, spliced and developed ever larger.

“In the last three or four years, there have been big changes, big houses, big everything,” McKesson said. “I would probably say there can’t be more than five or six original families or early families there now.”

McKesson and Sargent are known locally for their steadfast preservation of the area’s natural beauty. But when asked why the history of Cottage Row is worth holding on to, the towering canopy and limestone bluffs are not mentioned first. Perhaps there is more at stake.

“I’m a person who’s lived here my whole life — whose family has lived here since the beginning,” McKesson said, struggling to find words to explain her childhood filled with visions of the simple beauty of a red-and-white checked dress on its way to The Summertime for a vanilla ice cream cone. “I have to say it was an elegant time.”