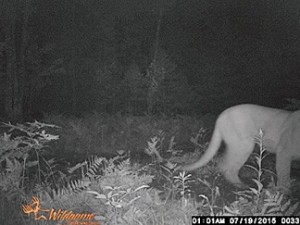 On Aug. 4, the department received a trail camera photo of a cougar taken July 19 from a Marinette County landowner.

After site evaluations, DNR staff confirmed the location of the photo. This photo was taken 10 days after and approximately 60 miles east of the recently confirmed Langlade County sightings.

Genetic evidence suggests cougars known to have entered Wisconsin are male cougars dispersing from a breeding population in the Western United States. There is currently no evidence that cougars are breeding in Wisconsin.

Cougars are a protected species in Wisconsin and hunting is not allowed. Cougars are not considered a threat to public safety, and in the unlikely event that a person is confronted by a cougar, face the animal and spread your arms and open your coat or jacket to appear larger. If a cougar approaches, make noise and throw rocks or sticks.