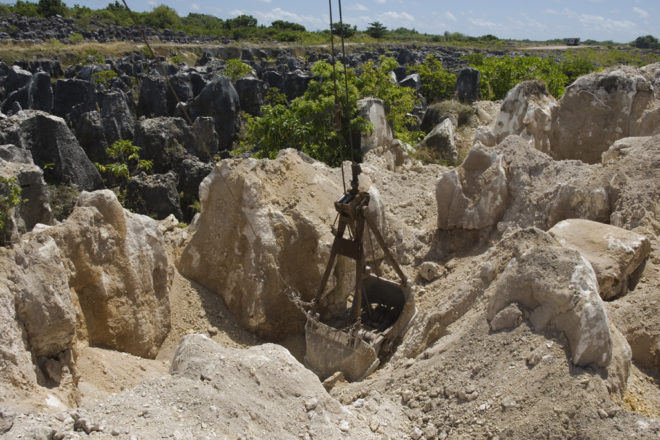 Mining of phosphate rock on the island nation of Nauru in the South Pacific. Photo by Lorrie Graham/AusAID.

Phosphorus is a limited, relatively scarce resource that is essential to all life forms. Sourced almost entirely from phosphate rock, it is a key component of fertilizer, but many leading researchers estimate that the Earth’s phosphorus reserves could be completely depleted in 50 to 100 years, and that our peak production is just 15 years away. Other studies, including one produced by the International Fertilizer Development Center in 2010, are far more optimistic and conclude that the world has 300 to 400 years of phosphorus reserves available.

But even those optimistic estimates have many concerned, as nearly 85 percent of the world’s reserves are believed to be in Morocco and the Western Sahara, controlled by the Moroccan royal family. Additional reserves are located in China, Jordan and the United States, primarily in Florida.

“It’s really scary,” says Doug Soldat, associate professor with the Department of Soil Science, University of Wisconsin – Madison. “Morocco is pretty tight-lipped about what they actually have.”

Phosphorus is vital to the global food supply, which is increasingly reliant on synthetic fertilizer and the intensive mining practices it takes to harvest phosphate. An estimated 17 million tons of processed phosphorus is applied on fields worldwide each year. In 2008 phosphate rock prices spiked 800 percent due to high oil prices and a dip in supply. That spike in turn increased food prices worldwide, hitting developing nations particularly hard.

Phosphorus doesn’t have to come from mining, however. There are numerous ways to conserve and recycle phosphorus, something modern economies aren’t very good at. Scientists estimate that just 20 percent of phosphorus from phosphate rock actually reaches the food we consume. Forty percent is lost in the mining process, and more is lost in the application process on lawns and agriculture.

“We waste a lot in the runoff from our lawns,” says Soldat. “There are a lot of ways to recycle phosphorous that we’re just not doing because it’s cheaper to buy it from Morocco or elsewhere. As supply dips, the incentives to recycle and conserve will grow.”

Roger Kuhns, geologist, environmental scientist and former resident of Door County, is a proponent of organic fertilizer, regardless of price.

“Phosphorous comes by mining phosphate rock,” he explains. “When you do that, you’re taking apart someone else’s ecosystem to fertilize your lawn.”

Phosphorus is also plentiful in animal and human waste and for centuries was recycled in place, as food was consumed and returned to the earth in the same place it was grown. Today only 50 percent of animal waste is put back into soil. Reducing agricultural runoff and soil erosion can greatly reduce the need for farmers to apply phosphorus to fields.