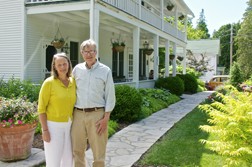 Andy and Jan Coulson are celebrating 40 years at the White Gull Inn, the 116-year-old inn that they renovated and expanded to include a full-service restaurant. Photo by Len Villano.

When Andy Coulson first became part owner of the White Gull Inn in Fish Creek, there were rotting floorboards, soggy beams and leaky roofs. Most rooms didn’t have their own bathrooms and were half the size they are today.

And Jan Lindsley, at the time, was just an employee.

Now, 40 years later, Andy and Jan have married and have updated the White Gull Inn for its modern guests while still holding on to the inn’s quaint, welcoming style.

“We’ve tried to maintain the traditional look, but comfort is strictly up to date,” Andy said.

The rooms are spacious and inviting, and walking into one feels almost like walking into a living museum of another time with crackling fireplaces, floral wallpaper and four-poster beds.

Along with fostering an old-fashioned feel for the rooms at the White Gull Inn, the Coulsons try to give every guest a similar experience by introducing themselves and building on that innkeeper-visitor relationship that makes for a personal stay at a historic inn.

And that personal experience works. The White Gull Inn draws a crowd of both tourists and locals, and the same visitors often return again and again.

“Over all the years the same cast of characters keep coming back,” Jan said.

In the winter, especially, the same crowd funnels into the restaurant. Diners often come in groups, and meet their friends for a warm meal in the snowy months.

“It’s a lot like a grocery store,” Jan said. “You go there and see everyone you know.” 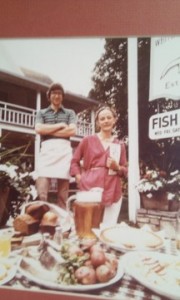 While in Australia in May of 1972, Andy Coulson received a fortuitous telegram. “White Gull Inn for sale. Need partner with $3,000. Please advise,” read the wire from his college roommate Dan Noonan. Coulson signed on as the fifth partner and returned to Door County in time to open the inn by Memorial Day. Jan (Lindsley) Coulson graduated from high school that same spring and found herself working at the White Gull Inn. Forty years later, the couple is married and continues to run the inn and restaurant listed on the National Register of Historic Places. Photo by Len Villano.

As the business grew over the past 40 years, the Coulsons’ relationship blossomed alongside.

Jan and Andy first met as co-workers. She had just graduated high school and came up to Fish Creek to find work. After peering in the windows at the White Gull Inn, she fell in love with the scene.

“It was magic,” Jan said. “It was such a charming place, and I thought ‘I’m going to work here this summer.’”

She did, working as a housekeeper for $1.40 per hour and sharing one of the inn’s rooms with other girls. She returned the next summer and toward the end of the season became very close with one of her bosses, Andy.

“We sort of realized that we were very good friends,” Andy said.

That winter, Jan went down to Phoenix, Ariz. and left her precious dog Ginger with Andy. The dog was perfectly behaved and had become a fixture at the inn. She never barked and had a way of knowing just when to head downstairs in the evenings when the last fish boil was over.

“He fell in love with the dog, I think, before me!” Jan said.

Andy drove to Arizona to bring Jan back to the White Gull Inn for the next summer season. The rest, the Coulsons say, is history.

While they worked to make the White Gull Inn a year-round venture, renovate the rooms, expand the property and put in a full-service restaurant, the Coulsons married and raised three daughters: Meredith, Emilie and Hannah.

All three girls grew up playing and working at the inn.

Just as their family roots began at the White Gull, the Coulsons have fostered a family of inn employees.

“We’re kind of like a family,” said Connie Pahl, manager at the inn. “Jan and Andy are really great people to work for. The environment is really nice, and it’s a great year-round job. It’s one of the most wonderful places.”

Pahl has worked at the White Gull Inn for 26 years, and her husband Dean is the head chef.

The Coulsons are working on a cookbook for the White Gull, which will feature recipes like cherry-stuffed French toast – the meal that won them the Best Breakfast in America award from Good Morning America. They printed a cookbook in 1996 for the 100th anniversary of the inn but wanted to do another to celebrate their 40 years there.

Even after 116 years of the White Gull Inn, and 40 with the Coulsons, the business is going strong.

“I feel like they’re good at making the place look fresh and new,” Pahl said.