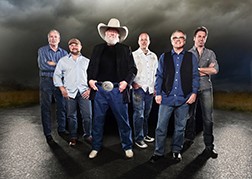 Few people in the country music industry have had as long and illustrious a career as Southern country-rock legend Charlie Daniels. Some attribute that to his fiery mastery of the fiddle, others to his classic storytelling through song, and still more to his good ol’ country boy charm.

Daniels will bring all of those, along with his five-piece band (comprised of Bruce Brown, Chris Wormer, Pat McDonald, Charlie Hayward and Shannon Wickline) to the Door Community Auditorium for a show July 19.

Since he first learned guitar, fiddle and mandolin chords as a young man growing up in North Carolina in the 1950s, Daniels knew the only future he would commit to was that of a professional musician.

“I wanted to make a living playing music, that was the first thing I wanted to do,” Daniels said during a phone interview from his home in Tennessee. “I wanted to be a professional musician. I was living in North Carolina and there was just not very many places to play – it was in the days before they had open bars; all it was was just little three-two beer joints and there just wasn’t any place to play hardly. I had to leave North Carolina to actually kind of make it in the music business, so that was my first aim was to make a living playing music.”

Early on, that meant the formation of the instrumental rock ‘n roll combo the Jaguars at the age of 21. Despite a 1959 recording session with Epic Records and Daniels’ original “It Hurts Me,” being recorded by Elvis Presley in 1963, Daniels was advised by Epic Records producer Bob Johnston to head to Nashville to become a session musician.

In 1969, he did just that, becoming one of the most popular fiddlers in country music’s epicenter. Among his most influential experiences were recording sessions with Bob Dylan, which in 2014 went on to become the focus of Daniels’ most recent album, Off The Grid: Doin’ It Dylan.

“I have a history with Dylan,” Daniels said. “I worked with Dylan as a studio musician on three of his albums, Nashville Skyline, Self Portrait and New Morning. I was a big Dylan fan before I started doing that and an even bigger Dylan fan after that and I wanted to pay tribute to him.”

From his sessions with Dylan, Daniels’ career took off, bringing him the role of producer (on two Youngbloods’ albums, Elephant Mountain and Ride the Wind), a European tour with Leonard Cohen, and a number of appearances on records with varying musicians.

After biding his time for a number of years, Daniels finally made his mark with his own record, Honey in the Rock, in 1973 (a year after forming the Charlie Daniels Band) and two years later, the Double Platinum Fire on the Mountain. But his most recognizable mark would be a few years down the road: the up-tempo bluegrass story of a young country boy named Johnny and his bet with the Devil.

In 2015, it would be hard to imagine a question exists that Daniels hasn’t answered about “The Devil Went Down to Georgia.” Surprisingly, that wasn’t the case when asked whose solo he prefers playing – Johnny’s or the Devil’s.

“I never thought about it (laughs),” Daniels said. “I like playing both of ‘em … they’re two totally different types of solos. The Devil’s solo is just all smoke and mirrors, there’s no musical quality to it, it’s just like Devil type stuff trying to deceive people. But Johnny’s solo’s got some substance to it, so I think Johnny’s solo is probably my favorite.”

The word substance seems to be a keyword in the half-century long career of a man who considers the highlight of his time as a musician to be split between being inducted into the Grand Ole Opry in 2008 and keeping “30 people steadily and gainfully employed for almost 40 years.”

Those steadily employed people, his music family, have been along with him after the success reached with “The Devil Went Down to Georgia,” which has included Daniels’ reach into the Christian music scene, Grammy nominations, the start of an independent record label (Blue Hat Records), receipt of The Pioneer Award by the Academy of Country Music in 1998, the Living Legend Award from The Music City News/TNN Awards show, performances for soldiers in a number of countries, and the release of dozens of albums.

At the age of 78, Daniels has no plans to slow down. He likens his 500-mile road tour trips to the routine act of a typical 9-to-5er getting in their car and driving to work, a point that can be made in his revelation that if there is one thing the country legend is addicted to, it’s entertaining.

“I get physically tired but it’s just as routine for me to get to my bus and ride 500 miles (as we did last night) to work as it is for you to get in your car and drive into town to go to work,” he said. “I’ve been doing it so long it’s just routine to me so of course you get tired, you get tired when you work, but I don’t look at it as drudgery. It’s fun to me.

“I look at it as a blessing from God that has given me desire in my heart and I’ve had so many of those,” he added. “It’s a wonderful experience. It’s great to look back, it’s great to look forward, it’s great to stand here. I love my life – I love my family, I love my band. I’ve got the best band I’ve ever had. My wife travels with me on the road. I have no complaints. Life is wonderful.”

Charlie Daniels Band will perform at DCA at 8pm on Sunday, July 19. Tickets for the concert range from $62 to $88. Advance reservations are recommended and can be made through the DCA box office, located at 3926 Highway 42 in Fish Creek. The box office is open Monday-Friday, 12-5 pm. Tickets can be purchased in person, on the phone at 920.868.2728, or online at DCAuditorium.org.