The first memory I have of Charlie Jarman was on a cold and snowy evening, the night of my first snowmobile ride. I managed to plow through not one but two sides of an electrified barbed wire cow fence on his dairy farm and looked the worse for wear, as I stumbled dazed into the Jarman farmhouse with a shredded jacket and gloves. Charlie’s grandson, Mike, escorted me into house to the astonishment of his grandmother Mary Ann. She gasped and rushed over to make sure I was okay. After double checking that I wasn’t bleeding, Charlie started to laugh, this fantastic, deep cackle, and proceeded to tell me stories about his and Mary Ann’s own snowmobiling escapades across the bay to Marinette with friends.

Charles Gilbert Jarman died Monday, Jan. 11, 2010 at his home on Mathey Road in the Town of Sevastopol. Emergency Medical Technicians who responded to his grandson Josh’s call for help determined Charlie had died from a heart attack. He died two days before his 74th birthday. 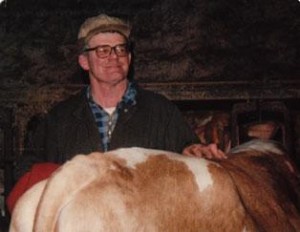 Charlie Jarman spent his life working a Sevastopol farm and serving his community. The former Door County Board Supervisor and school board member died Jan. 11 at age 73.

Charlie and George Evenson were friends for about 60 years – snowmobiling friends, farming friends, card playing friends, you name it the two of them have probably been through it.

“When I graduated from eighth grade, there was an incident at Sevastopol School,” Evenson recalled. “A couple of boys brought a stick of dynamite to school. They took it out into the woods on Picnic Day (the last day of school) and it went off right as Charlie, who was in fourth grade, ran past it. Those boys were in a lot of trouble,” Evenson said, laughing at the memory.

Evenson and Charlie owned farm property adjacent to each other. Charlie inherited the work of the dairy farm early in life from his parents, Gilbert and Viola Jarman. His father died when he was just 13 years old, and Charlie, his mother and her in-laws worked the farm, the animals, and the cherry and apple orchards. Until the day he died, Charlie worked the farm – driving machinery like a cat with its tail on fire, milking cows, and “fix, fix, fixing” the family’s equipment.

“One of his often said phrases around the farm was ‘Fix, fix, fix. All I do around here is fix,” his daughter Ann Jarman shared in a eulogy at Charlie’s funeral on Jan. 16. The funeral was held at Saints Peter and Paul Catholic Church, the same church where Charlie and Mary Ann were married. Charlie was baptized Lutheran and converted to Catholicism when he married Mary Ann.

Complain and holler as he might around the farm, Charlie was born for farming and was a farmer’s greatest advocate in Door County and across Wisconsin. 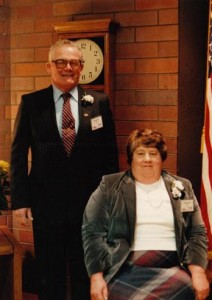 “When Grandpa and Grandma Jarman died and left the farm to [Charlie and Viola], she gave him a choice,” Ann said. “They could sell the farm so Charlie could go to college, or they could keep farming. He chose to keep farming.”

Evenson said he will miss his lifelong friend, mostly for the conversations the two could have and Charlie’s dedication.

“He was a damn good farmer. He knew his stuff,” Evenson said. “His whole life was dedicated to the farm. Born and raised and died on that farm.”

“In the business of conservation in Door County and statewide and northeastern Wisconsin, Charlie was really respected because he was just a regular guy,” Schuster said. “When we worked on new ordinances in Door County, Charlie would help us think through how it was going to play out with the local landowners. He was a farmer who very much wanted to protect the water quality of Door County. It’s one thing when a paid person like me stands up to say something to a legislator. It means a lot more when someone like Charlie stands up and says ‘I’m a farmer, and I want this.’”

Charlie spoke up frequently and often loudly on many and sometimes all issues as an elected Supervisor on the Door County Board of Supervisors. County Chairman Leo Zipperer served with Charlie for many years on the county board and committees.

“People always knew where Charlie stood,” Zipperer said diplomatically. “He represented his area very well. There wasn’t anything he wouldn’t do, as far as going out to find out the particulars of an item that came before the board.”

Charlie was elected to seven terms on the County Board, from 1990 to 2002, and served as chairman of the Resource Planning Committee, Land Conservation Committee and the Library Board. He served on the Animal Welfare, Ag and Extension, Bay Lake Regional Planning, Ad Hoc Building, Administrative, Negotiating, and Ethics committees. The County Board recognized Charlie’s service to the county with a resolution at the County Board meeting Jan. 26 and honored the Jarman family with a plaque in the shape of Wisconsin.

After Mary Ann Jarman died in 2007 after 51 years of marriage to Charlie, he was heartbroken. The two married the year after they graduated Sevastopol High School. He became even more involved in activities at both Saints Peter and Paul and St. Joseph’s Catholic churches – sharing his deep bass with those congregations and frequently singing solos at funerals. He continued to play cards with the various groups of friends he and Mary Ann socialized with for much of their adult lives. Both Evenson and Charlie’s friend and fellow Sevastopol farmer Dan Ploor said Charlie’s winning comment was legendary.

“Whenever he would win a hand of cards, he would say ‘How sweet it is, how sweet it is.’” And what did he say when he would lose? “Well, that’s not suitable for print,” they both said with a chuckle.

Door County lost one of champions, one of its unwavering public servants the day Charlie Jarman died. Rest in peace, Charlie. Your community and your family will miss you dearly.