In an age of charters and fractional jet ownership – like Warren Buffett’s NetJets – planes fly in and fly out of airports with passengers, spending very little time parked. A brief glimpse of a plane outside one of Door County’s three airports, which can be deceptively quiet on a summer afternoon, may be the only sign of travelers. 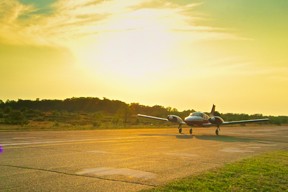 Businesses, residents and visitors are using the counties’ airports as an alternative to commercial flights. Photo by Len Villano.

Although no local company keeps a jet at Sturgeon Bay’s Cherry Land Airport, it still averages nearly a jet a day throughout the year, and for several local businesses, the airport is vital to their operations. They fly crews to job sites, executives to oversee operations or meet with customers, while prospects and existing customers fly in to tour plants or discuss plans.

Brad Andreae, CEO of Therma-Tron-X, which manufactures large industrial equipment for finish painting, wastewater treatment, and conveyors and programmable hoists to move large parts around factories, said the company regularly flies crews to distant job sites. Their crews work 66 hours a week and are flown home every other weekend. The company plane can take eight at a time.

“We build as much as we can here and then assemble onsite,” he explained. Customers include Caterpillar, John Deere, Toro, Cummins Diesel, Oshkosh Corporation, and all the big auto manufacturers.

The company will soon be operating three planes. It replaced a Citation jet with planes better suited to Sturgeon Bay’s relatively short – 4,600 feet – main runway. Now it is operating a Cessna 182, a new Pilatus will arrive early September and a Lancair Evolution kit plane that Andreae built himself will eventually join the fleet.

“We have a 27-man engineering office and many trips are out and back with two or three people,” he said. “Flying commercial, these take three days, while in a pressurized single, we can be down to Orlando and back in one day.”

“Companies flying their planes from here can get close to the place they need to be,” he added. For Bay Ship, that might be a port anywhere along the Great Lakes, not necessarily in a town near a major commercial airport.

Sturgeon Bay has considered extending the runway so that jets could take off with enough fuel to reach California, but it decided not to because the cost would be around $10 million to acquire land and move nearby roads – and only one or two percent of the planes taking off are headed that far. 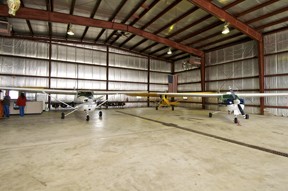 One of 60 hangars at Sturgeon Bay’s Cherryland Airport. Photo by Len Villano.

Jim Collins, president at C&S in Sturgeon Bay, said the manufacturing company uses its plane to reach accounts across the country.

“Having the airport here and a company plane, we can make day trips 500 miles out and be back the next day,” he said. “It is very convenient, and we also have customers who fly in regularly for plant tours or meetings. We have a nice airport for this size town.”

The company serves the plumbing and heating industry through more than 3,000 stocking wholesalers throughout the country, many of them in small towns that would be difficult and slow to reach by commercial air.

“We have had a plane since 1985 and it works out well for us,” Collins added. The company runs a twin-engine turbo prop and a single engine plane.

Daniel Schwartz at Freshwater Fish, the latest Door County Economic Development Corporation Entrepreneur of the Year, said the company’s fish processing plant in St. Agnes, Michigan is an eight hour drive, or about an hour by air.

“From a logistics standpoint, Green Bay might have made more sense for our company, but we like Door County,” said Schwartz. The firm employs about 50 people in the fall and about 10 in slow periods.

Hugh Mulliken, an Ephraim-based home designer, real estate agent and county board member, said many people don’t understand how efficient a plane can be. 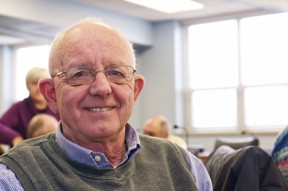 “I can be in Washington Island in 20 minutes,” he said. Flying puts a whole new spin on distances, especially when the destination is across water.

“I can do Marinette, Menominee or Escanaba as fast as I can do Sturgeon Bay,” said Mulliken. Many of his clients fly into Ephraim for meetings, or if they have larger planes, into Sturgeon Bay.

Ephraim flyers said that the airport has attracted several owners who fly in on a regular basis from as far away as Dallas and as close as Minneapolis – some to stay in hotels, others because they have a vacation home in Door County.

Ed and Kathy Bristow usually bring their own folding bikes when they fly in from Waukegan, Illinois in their 1969 Skyhawk 172. The plane’s speed depends on the wind, said Ed, a pilot for United, but varies from 90 to 120 mile per hour. They use it to visit family around the Midwest and to fly to vacation spots like Ephraim. 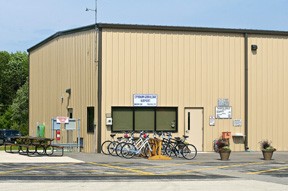 The Ephraim Gibraltar Airport has bikes available for rent to pilots and passengers flying in. Photo by Len Villano.

Others fly in to fish or play golf at the Peninsula State Park, which has a special deal during the week for flyers. The Ephraim airport is also home to Grizzly Tours, run by Dave Burke, which offers scenic flights of 15 to 100 minutes.

Washington Island has an airport with two grass runways. Walter Nehlson, the airport manager, said it doesn’t get any business traffic, but the island does have 15 to 20 people who fly to their island vacation homes there.

“It’s either the ferry or the airplane,” he says.