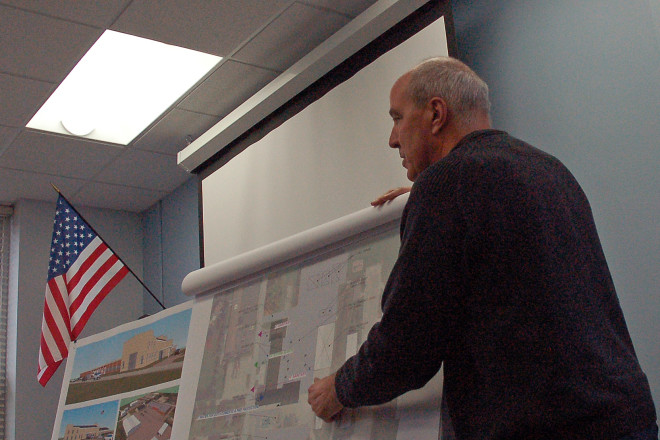 Door County’s Property Committee got a first look on Jan. 13 at what it would take to rehabilitate the former county highway shop on 14th Avenue in Sturgeon Bay to house the county’s EMS headquarters and create a new home for the crowded senior citizen center.

“I think we’re bringing good news today about the alternative approach,” said John Cain of the Milwaukee-based Venture Architects, the firm hired to conduct a feasibility study on the potential of rehabbing the building.

“This is a really sustainable project. It really has that potential,” Cain told the committee.

The county had previously considered two separate facilities for the two very different county services – the EMS headquarters on property leased from Ministry Door County Medical Center and the senior center at its present location on 14th Avenue.

An artist’s rendering of how the rehabbed old county highway shop could look as the new EMS headquarters and senior center. Image provided by Venture Architects.

Cain said the cost of rehabbing the highway shop would come to $9,216,889, or about half a million less than the estimated cost for the two separate buildings at two different locations.

“I’d like to think that’s good news for those who would really like to see this concept go forward,” Cain said.

However, Cain pointed out that the only thing not included in the project budget is environmental mitigation at the old highway shop, which served as the county garage and fuel storage and fill-up facility. Two underground tanks continue to be used for the municipal filling station used by a wide variety of governmental bodies, including county, city and school vehicles.

County Administrator Ken Pabich said those tanks are nearing the end of their life anyway, so this would be a good time to end their service and place new tanks in a different location, possibly across the street on another county-owned plot.

There was also concern from several committee members that the porous material in the building would be permeated with years of diesel fumes, making the building uninhabitable after the rehab.

Cain reassured the committee that it would work with Paul Davis Restoration, Inc., of Milwaukee, a firm experienced in removing odors from buildings.

“We still don’t know if it’s livable,” said committee member Richard Haines. “You’re going to put people in there. For the same amount of money, you can build two new buildings and you know they’re not going to be smelly.”

“We’re talking about $10 million. We need to know for sure,” said committee member Jon Koch. “We have yet to hear from a professional about how it can be done, with assurances. You’re going to have to convince me that it’s livable.”

The meeting started out with the idea that Cain and Craig Schuh, a municipal engineer with the Green Bay-based Ayres Associates, and two representatives from the Immel Construction firm would present details on the rehabilitation of the old highway shop and that it would be approved by the committee for consideration by the full board of supervisors at its Jan. 26 meeting. However, because of the environmental concerns, it was decided that a representative of Paul Davis Restoration would explain to the committee at its Feb. 1 meeting what could be done to mitigate contamination at the site.

“This is their specialty,” Cain said.