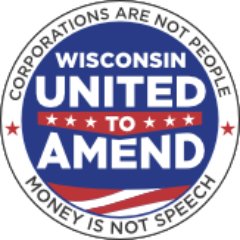 By a vote of 19 – 2, the Door County Board of Supervisors passed a resolution in support for a constitutional amendment to change the rules around campaign finance. County board chair David Lienau and supervisor Ken Fisher voted against the resolution.

The resolution is seen as the capstone of a year-long effort by the local and nationwide group United to Amend to bring campaign finance reform from the ground up.

Door County joined 11 other counties in Wisconsin that have passed either a resolution or held a successful referendum to urge the state legislature to hold a non-binding referendum on campaign finance reform.

Supervisor and chair of the county’s Legislative Committee Susan Kohout opened the discussion addressing the question of partisanship that follows the topic around.

“I would like to comment on the elephant in the room, whether or not this is an issue that’s appropriate for the county board to address as a local nonpartisan board,” Kohout said. “The main criteria that we talk about to determine whether we should take on an issue to discuss it and act on it is, does it affect the county? I don’t think there’s any question that having this amount of dark money floating around in our election system makes a difference.”

At the time of the county’s resolution, 15 of the 19 municipalities in Door County have passed their own resolutions on the topic. Meanwhile 19 states have already called on Congress to propose a constitutional amendment to overturn the effects of the 2010 Supreme Court’s Citizens United ruling.

“It’s going to be a long process,” Kohout said. “It took women 72 years to get the vote. And believe me, this resolution isn’t nearly as scary as we women are.”

Ken Fisher, citing the reason for his vote against the measure, said money has equaled free speech for centuries and he does not support a law limiting what a citizen can do with their money.

“The Supreme Court ruled that money is free speech,” Fisher said. “Money has been free speech since before this country was even thought of…. To tell me how I can use my money, I don’t like that. That’s taking away my freedom.”

Supervisor Linda Wait, who has previously spoken in opposition to the resolution on the grounds of its political nature, voted in support after talking with her Sevastopol constituents.

“When we start restricting what is and what is not free speech, we might find ourselves in a situation that we don’t like,” Wait said, expressing her concern with the resolution. “[But] talking to some of the Sevastopol constituents, they feel strongly about this resolution. It is their voice and I guess our opportunity to reflect their voice.”

With passage of the resolution, the topic has the chance of being picked up by the Wisconsin Counties Association as part of their state platform, but representatives at the association have said it is unlikely to be included in their lobbying agenda this year.

The Village of Sister Bay, of which Lienau is president, may also take up the resolution at a future meeting.