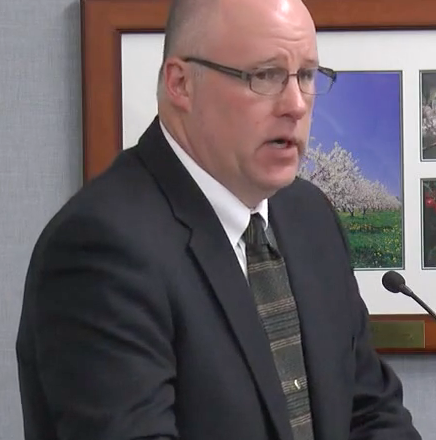 Who is the most frugal supervisor on the county board?

Some might say Linda Wait of Sevastopol, who constantly questions the cost of things that come through in the monthly agendas and in her committee assignments. Or perhaps it’s David Enigl, who represents parts of the towns of Baileys Harbor, Egg Harbor and Jacksonport, as well as the Village of Egg Harbor, because he also regularly questions costs and at a recent meeting wondered aloud why Door County has 21 supervisors when other counties of the same size have just a fraction of that number representing the public.

But longtime supervisor Ken Fisher made a play for the title at the Aug. 27 meeting when he objected to a resolution calling for $1,500 to be allowed for each of the 21 supervisors to attend conferences and workshops throughout the year.

During a lengthy debate about compensation for attending conferences, Fisher said that $1,500 is “overly generous.” He suggested $1,200 is more suitable and made an amendment to change the resolution, which passed by a 12-8 vote. That’s a potential annual taxpayer savings of $6,300.

That reduced the annual total that supervisors could spend for conference fees, lodging and meals to $25,200, down from the $31,500 originally proposed. However, as county administrator Ken Pabich pointed out to the board, the average spent in terms of expenses for conferences by the supervisors has been $16,000, not including mileage, which they are also paid. He doubted that would change much.

Supervisor Megan Lundahl said the whispers about this resolution had been that several supervisors had been overzealous in attending conferences and workshops, thereby spending more county money than their colleagues had.

Board chair Dave Lienau said that was not the case, and he added that it should help supervisors choose which conferences they want to attend. Currently, he said, he receives weekly contact from supervisors asking about attending conferences.

“It’s not that open checkbook anymore,” Fisher said in trying to explain the motivation behind the resolution. “You have to pick and choose what to go to.”

Several supervisors had questions about how much had been spent in the past, so Leinau suggested the resolution be tabled until more research could be done. Instead, someone called for the vote, and the $1,200 figure was passed 17-3.

In other matters, the board:

• Approved, with a single no vote from Supervisor Ken Fisher, a new, three-year collective-bargaining agreement with the Door County Emergency Services union. Corporation counsel Grant Thomas said that although there may be some lawyerly tweaking of the agreement, it was essentially a finished document that the board could vote on.

• Approved the transfer of up to $40,000 in nonbudgeted funds for the removal of a human-health hazard at an unidentified property. Corporation counsel Grant Thomas explained that this is the second time such action has been required for the same property. The first time was in 2002, when $7,000 was spent on the cleanup.

Asked about the large cost difference between the two cleanup efforts, Thomas said things have changed since 2002, when volunteers were able to assist in the cleanup. Now, he said, a professional haz-mat team will be hired to do the work.

Supervisor Susan Kohout said she has gotten questions about why this property was evaluated for human-health hazards.

“We’re a complaint-driven system,” Thomas said, adding that although there may be nuisance properties out there with old cars and houses in disrepair, this particular property “has no match in Door County.”

Asked by Supervisor Linda Wait whether there is a likelihood that the board will have to approve funds for a cleanup of the same property in 10 years, Thomas replied, “Yes. I don’t know about 10 years, but it is likely we will have to clean it up again.” She then asked whether it would be cheaper to demolish the building. Thomas said it might be, but “the individual would be left without a place to live.” He added that the person living there is “competent.”

• Accepted $6,500 in donations for the School Resource Officer Unit from Walmart and the Raibrook Foundation.