A plan to establish a new basic fee plan for emergency services ran into a brick wall at the July 24 meeting of the Door County Board of Supervisors.

Door County Administrator Ken Pabich and Emergency Services Director Aaron LeClair explained that although charges for some services have been discussed in the past, the charges have never been applied. After review by the Emergency Services Committee, a new fee schedule was introduced.

Pabich first explained that although emergency services will continue to provide lift assist for people who have fallen without charge, certain abusers of the system have been identified – nursing facilities – and the county will work with those organizations so they do not take advantage of the free service.

LeClair explained that the new charges were broken down into two groups – ALS, or advanced life support that requires a higher level of procedures, and BLS, or Basic Life Support, which might include basic first aid. He also mentioned that currently, the county-run ambulance service only charges if they transport a patient to the hospital. Last year he said the service responded to 1,787 calls that did not involve a trip to the hospital.

The proposed fee change was to include a $250 charge for a BLS response, or for a case where first aid might be provided but not transport to the hospital. LeClair said about 480 of those 1,787 calls that did not require a hospital trip last year would be charged $250 if the new fee schedule were approved.

But Supervisor Dan Austad was the first to voice concern for the new charge, saying he was totally against the idea because it may deter some people from making that 911 call. He said what if a kid falls off a bicycle and a concerned bystander calls 911. The ambulance arrives, puts a Band-Aid on the kid’s scuff, “and someone has to pay 250 bucks,” Austad said.

LeClair, agreeing that they do receive a good deal of calls from someone witnessing an accident, said they would have to “work internally to determine the qualifiers on whether to charge.”

Austad asked if they shouldn’t have codified that before bringing it to the board.

Board Chair Dave Lienau asked what would happen if someone called 911 with chest pains, but when the ambulance arrives, they find the person suffering from gas rather than a heart attack.

“Would that individual be charged?” he asked.

LeClair reiterated that would have to be determined by internal policy, but added that if they did respond to a heart attack call, they would still be using a cardiac monitor and other supplies to determine what was wrong with the person, so, since service was provided, there probably would be a charge.

Austad said the public will be stuck with the perception that they will be charged for calling, so that will deter some from calling when their lives may depend on it.

Supervisor Susan Kohout asked LeClair if he had a breakdown of how much each ambulance run costs. He said when you add up all the calls divided by the department’s gross budget, you come up with $1,234 for every ambulance run.

EMS Committee member David Englebert pointed out that there are a lot of costs involved with emergency services, and the committee spent a lot of time and effort coming up with the new fee schedule, which prompted committee chair Joel Gunnlaugsson to point out that he was the only member of the committee to vote against the fee schedule because of the $250 BLS charge.

“We’re paying tax money to pay for these services,” he said, adding that he believes the charge will deter people from calling for an ambulance. Remove the BLS charge, he said, and I will support it.

Supervisor Nissa Norton said there are already people in the county struggling to pay for their medication, and this new charge might stop them from calling for help.

Austad moved to remove the $250 BLS fee from the schedule, which was seconded by Gunnlaugsson.

Supervisor David Enigl asked LeClair if this new fee passed, would emergency service personnel be prepared to inform people of the new charge. LeClair said they could, but their first priority is really dealing with the medical situation, not to talk about financing. But he agreed that after the medical issue, the cost is always second on people’s minds. He added that the service is able to offer zero percent payments on whatever care recipients can afford, but also recognizes that a lot of the patients are on Medicare and Social Security, so don’t have disposable income for health emergencies. He added that almost 68 percent of the patients the service dealt with in 2017 were on Medicare.

Enigl then asked how many of the cases the service dealt with last year were county residents and how many visitors. LeClair said they have not been collecting that information. 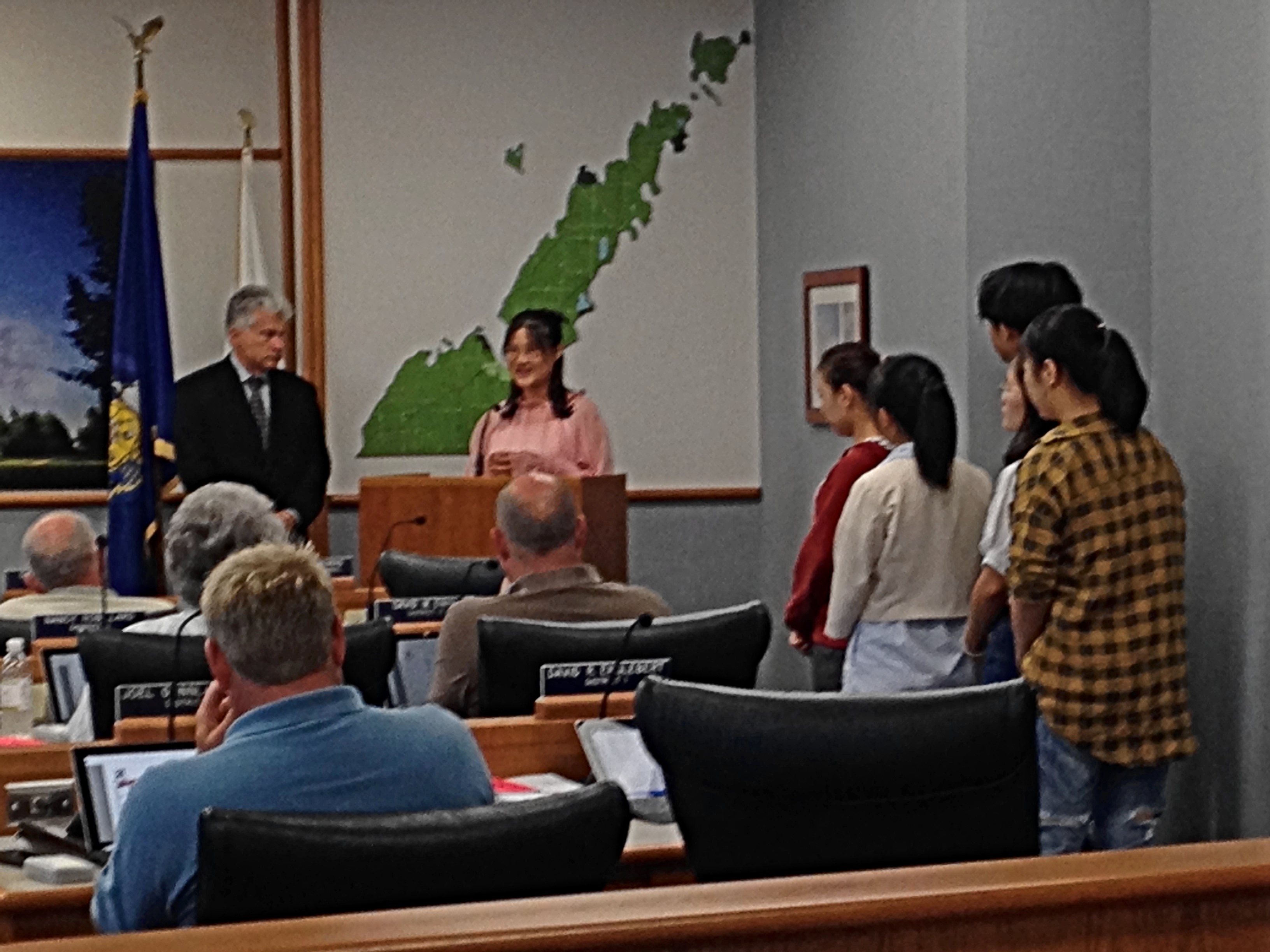 Seven J-1 visa students from Door County’s sister city, Jingdezhen, China, introduced themselves to the Door County Board of Supervisors at the July meeting on Tuesday. It is the second summer students from the sister city have traveled the 7,000-plus miles to work in and explore Door County through the J-1 visa program. Photo by Jim Lundstrom.

Supervisor Laura Vlies-Wotachek said that is information that should be collected for the future. She also argued that the proposed $250 fee is below the average of what other services provide and that there should be a charge and she doesn’t believe that charge would deter anyone from calling an ambulance when they need one.

Supervisor Helen Bacon then pointed out that Door is one of only two counties in the state to run an ambulance service, so comparing the county service to privately run services is not a fair comparison. She also said the $250 fee will definitely stop some people from calling an ambulance and incurring more financial burden.

Supervisor Susan Kohout said she is a believer in user fees for services.

“As an elderly person myself, I fully expect to get billed for things,” she said. However, she added that it might be best to vote for the amendment to drop the BLS fee and then send that portion back to committee for reconsideration and a fully formed policy on when to apply the fee.

The board voted 16-4 to approve the amendment to reject the $250 BLS fee and send it back to committee.