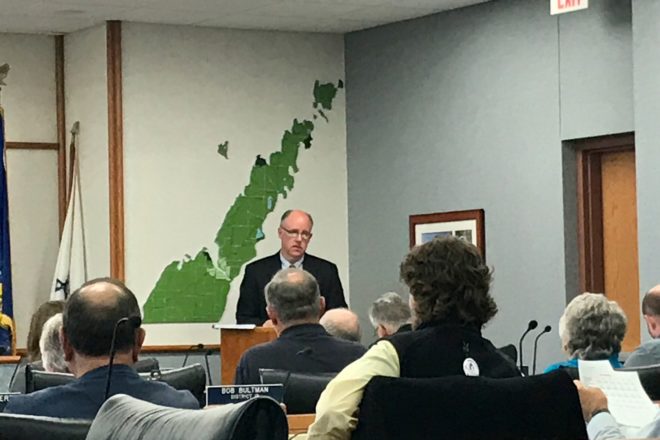 County Administrator Ken Pabich tells the Door County Board of Supervisors at their annual budget meeting that the county is about to hit a budget wall, with deficits looming in the future. Photo by Jim Lundstrom.

The budget for operating the government of Door County is about to hit a wall, county Administrator Ken Pabich warned the 21 county supervisors Nov. 12 at their annual budget meeting. Among the budget materials Pabich provided to the supervisors was a county-budget model looking ahead to 2025, and it was not a pretty picture.

Like the dark harbinger of future Christmases in Dickens’ A Christmas Carol, Pabich’s budget model predicts budget shortfalls ranging from $183,276 in 2021 to $1.4 million in 2025.

Yet, he added, “Each year we’ve got to balance the budget. So we’re at that wall. What do we do about that?”

Pabich advised the board to keep a close eye on medical and dental insurance rates. There have been no increases during the past five years, and the county was looking at a 19 percent increase for 2020 (up to $7.5 million from $6.7 million in 2019). Although Pabich said they were able to make some plan changes to adjust the total cost, he cautioned, “We’ve run out of tools to adjust those costs.”

Pabich suggested oversight committees look for ways to raise revenues through fee increases, but he did not name any specifically.

Supervisor Dan Austad suggested that legislators be contacted regarding doing something about the levy limits that are imposed on all municipalities in the state and tied to new construction.

The annual budget hearing began with a public hearing during which no member of the public spoke.

Public safety remains the biggest consumer of tax dollars, at 37 percent of the total.

Two amendments had to be made to the budget. The first was to include a Treatment Alternatives and Diversion grant of $141,011 from the Wisconsin Department of Justice for the Health and Human Services Department to administer a treatment court that Circuit Court Judge David Weber and others have been working to bring to Door County. The grant includes $48,000 to hire a coordinator for the program. Joe Krebsbach, director of Health and Human Services, said the treatment court would first serve drug offenders and potentially – eventually – mental-health cases as well.

The second amendment was a technical adjustment of the overall tax levy by $977 due to a decimal adjustment made by the state.

• The board unanimously approved broadband-expansion grant applications for the Village of Egg Harbor and Washington Island.

Mick O’Malley, director of internal controls and operations at Nsight, said the idea in Egg Harbor is a pilot project for public broadband services that would be a first in the state and a model of how it should be done. He said that with a modest investment from the county ($5,000) and the municipality ($10,000), Nsight will apply for a grant for the $700,000 project from the Wisconsin Public Service Commission (PSC), which in September announced it would award up to $24 million in broadband-expansion grants in 2020.

“We’re not going to get 100 percent from the PSC,” O’Malley said, adding that Nsight was willing to make an investment in broadband for the county.

Egg Harbor Administrator Ryan Heise said this was not something it sought, but that he had been approached by Pabich and Jim Schuessler, executive director of the Door County Economic Development Corporation, to be the pilot municipality for the project.

“They really put this in our lap, which is nice,” Heise said. “We’d be happy to lead the way.”

Heise was told it would be a mix of Wi-Fi covering the main corridor of the village and small cell (cellular service) technology.

“They’re doing all the work, and our financial investment is limited,” Heise said. “There will be some ongoing costs. The village will own the public Wi-Fi, which will allow us to have a splash page. We’ll be in their phones, and we can promote something – maybe our Green Tier legacy project.”

O’Malley estimated the Washington Island project will exceed $1 million. It involves laying fiber from Gills Rock to Northport in order to connect with previously laid fiber from Northport to Plum Island to Lobdell Point on Washington Island, which will provide “critical infrastructure” to the island.

Washington Island Supervisor Joel Gunnlaugsson threw his hands in the air triumphantly and “excitedly” supported the proposal, as did his 20 colleagues.

• The board approved the formation of the 2020 Census Complete Count Committee to oversee the 2020 census in the county. Administrator Pabich asked for a couple of supervisors to volunteer for the committee, and he’s also seeking town and village clerks and community members to serve. He pointed out that the Census Bureau is about six months behind on organizing things, so he wants to form the committee as soon as possible.

• The board also discussed its own compensation. After much discussion, members rejected a plan to pay each supervisor $7,500 annually (and $1,200 for expenses to attend conferences) and opted instead to be paid as they are now, through a per-diem system.

• The annual budget meeting also includes an annual report from the Door County Fair Association, presented by President Tom Ash. The 2019 fair was a success, with revenues up ($242,397.94 in total) despite a drop in attendance. The fair made a profit of $15,741. Ash said there were many great comments about the recent improvements to the fairgrounds. “We continue to try to build and keep it fresh,” he said.