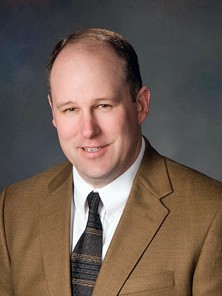 After two closed-door sessions at its June 16 meeting, the seven-member Door County Administrative Committee recommended the hiring of Ken Pabich as the new county administrator. The committee’s decision was forwarded to the full county board for its decision at the regular monthly meeting at 9 am on June 23.

Since January 2007, Pabich has served as planning and economic development director for the City of DePere. Before that Pabich worked in Calumet County’s Planning Department, beginning in September 1999 as GIS Administrator, and from May 2004 as director of Planning, Zoning and Land Information.

Pabich and John Fitzpatrick, assistant city manager and director of administrative services for the City of Oshkosh, were the two finalists for the position.

“It was a unanimous choice of the committee,” said County Board Chair and Administrative Committee Chair Dan Austad. “The other person was so close, it was almost a coin flip.”

The position of county administrator has been open since November 2014 when Maureen Murphy resigned from the position. Since then, Corporation Counsel Grant Thomas has served as interim administrator.

“It’s been a privilege to serve as both,” Thomas said. “I’m not exactly counting down the days, but I won’t shed any tears when my time as interim county administrator comes to an end, although having been through this before, there’s going to be a transition period here. The new county administrator will have to get his feet on the ground and start running. I’ll be there hand in glove with him as we transition. It’s not as simple as, he starts on Monday and this is yours.”

Thomas pointed out that should Pabich be confirmed by the full board, he’ll already have a full plate in front of him.

“There’s just a lot going on right now,” Thomas said. “We’re doing the refinancing of the bonds. Three major projects going on with the ambulance station, the human services resource center and the fiber backbone, we’re in the middle of the budget session, and come July 1st we’ll start collective bargaining with our two remaining unions.”

Pabich was offered a salary of $108,000 annually, according to Door County Human Resources Director Kelly Hendee.