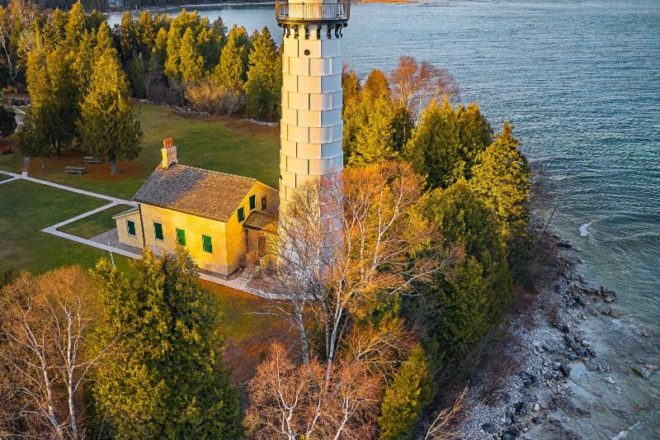 The Cana Island Lighthouse in all its glory. Photo by Dan Anderson.

The Door County Board of Supervisors agreed to advance money to keep the Cana Island Lighthouse Restoration Project on track.

The unanimous vote on Dec. 14 was, specifically, to transfer up to $700,000 from the county’s unassigned fund balance – and use $50,000 from its Cana Island Reserve Fund – to act as an interest-free, temporary loan for the project. The bridge loan was needed to complete the fourth and final phase, which includes restoration of the lightkeeper’s house and the light-tower interior.

Total restoration and abatement costs plus fees and contingencies were projected at $976,672 in April. Those are expected to increase by 12% by the time the 2022 construction is underway.

Money in hand for the project is currently $398,168, according to Ken Pabich, Door County administrator. This includes a $250,000 Nelson Family Fund grant that must be spent in 2022.

“So if we don’t get started, we’ll actually lose money,” Pabich said.

When the board voted to proceed with the fourth phase during its December 2020 meeting, the go-ahead was contingent upon receiving sufficient funds from the Door County Maritime Museum, donations and grants.

“While grant funding has been largely successful, there is currently a shortfall to fully fund the project to completion,” said Wayne Spritka, Door County director of facilities and parks, in a memo to the supervisors.

The Door County Maritime Museum is working on three grants worth $600,000. If all were successful, a smaller advance would be needed. Regardless, the resolution the supervisors unanimously passed said they were willing to allocate up to the higher amount with the understanding that the funds advanced would be paid back within four years of Dec. 14, 2021.

The light tower has been in ongoing use as a navigational aid for more than 140 years and is currently operated by the United States Coast Guard. The original third-order Fresnel lens is still in place and is lit every evening, even during renovation.

In addition to its duties guiding lake traffic, the light station is operated as a museum and tourist site by the Door County Parks Department, in conjunction with the Door County Maritime Museum, and is perhaps the most iconic and photographed of all Door County landmarks.