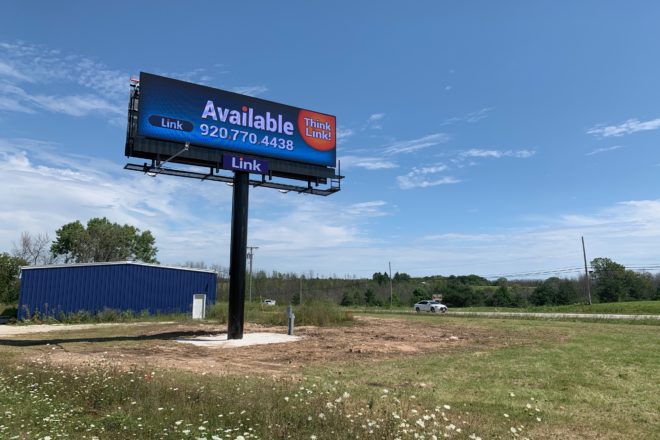 A new billboard was installed earlier in August in the Town of Sevastopol on property located just north of the City of Sturgeon Bay, raising questions from those who thought new billboards were a thing of the past in northern Door County. Photo by Myles Dannhausen Jr.

When a new electronic billboard lit up on the west side of Highway 42/57 just north of Sturgeon Bay this month, it raised a lot of eyebrows for those who thought new billboard structures were a thing of the past in northern Door County.

In fact, the Door County Land Use Services Department thought it had put an end to the billboard debate in areas under county zoning back in 1985 when it effectively banned new billboards by disallowing any new off-premise signs of more than 32 square feet. This meant that if you operated a business on one property, you couldn’t put a large sign for that business on another unrelated property.

The ordinance also outlawed the expansion of existing off-premise signs and banned the maintenance of those signs. That last measure was an attempt to effectively put a sunset on billboards in areas under county zoning because as structural components of signs deteriorated, they would eventually collapse and could not be rebuilt.

So when Link Media submitted applications for 15 new sign permits to expand existing billboards and to erect two new freestanding billboards in May of 2019, the department issued a quick denial and hoped it would be a closed case. That’s not what Link Media’s representatives had in mind.

Link Media did not respond to requests for comment for this article, but it did appeal the denials, citing a little-known 2015 United States Supreme Court ruling in a case known as Reed v. Town of Gilbert, Arizona. Mariah Goode, head of the Land Use Services Department, was dismayed when she realized that this ruling and the interpretation of other courts meant the county’s sign ordinance was in jeopardy.

Because the county had regulations pertaining to different types of signs – such as real estate signs and temporary development signs versus business signs – it could be considered to be regulating the content of the sign.

“Basically, the courts have said that if you have to read a sign to determine how to regulate it, something is wrong with your regulations,” Goode said.

Even though Link’s applications were denied based on size, not content, the fact that some segments of the county’s ordinance violated the Reed v. Gilbert ruling meant that the entire ordinance could be thrown out.

“We might be looking at a free-for-all if that happened,” Goode said.

In exchange, Link agreed not to file a lawsuit challenging the constitutionality of the county’s sign ordinance. The county has since updated the sign chapter of its ordinance, which was adopted in October of 2019.

“Basically, what we had to do was add specificity to the types of signs that are not allowed, and the types that are exempt,” Goode said.

She’s confident the ordinance now adheres to the Reed v. Gilbert ruling and the peninsula is once again safe from the construction of new billboards in the future – at least in municipalities under county zoning (Liberty Grove, Jacksonport, Baileys Harbor, Sevastopol, Gibraltar, Brussels, Town of Forestville, Clay Banks, Union, Gardner, Town of Sturgeon Bay and Washington).

Ten of the applications Link had filed in 2018 were for new nonelectric billboard faces located on the Door County Coastal Byway, a Wisconsin Scenic Byway, which runs 66 miles from north of Sturgeon Bay, up Highway 57 to the tip of the peninsula, and back south along Highway 42 to the starting point.

Those billboards will not be allowed thanks to the state’s rules regarding signs on Scenic Byways, said Liat Bonneville, the Rustic Roads coordinator for the Wisconsin Department of Transportation.

Wisconsin statute bans the construction of new signage that’s “visible from the main-traveled way of a highway that is a Scenic Byway” except for directional signage and signs advertising the sale or lease of property or activities conducted on the property.

Ann Miller, chair of the Door County Coastal Byway Committee, was relieved to get that confirmation. The committee has filed for a federal designation as an All-American Road. The new billboard installed earlier in August just south of Culver’s in Sturgeon Bay – and the potential for more – don’t sit well with her, however.

“If they put in more signs by Culver’s, it would certainly make the gateway to the Byways look kind of tacky,” Miller said.