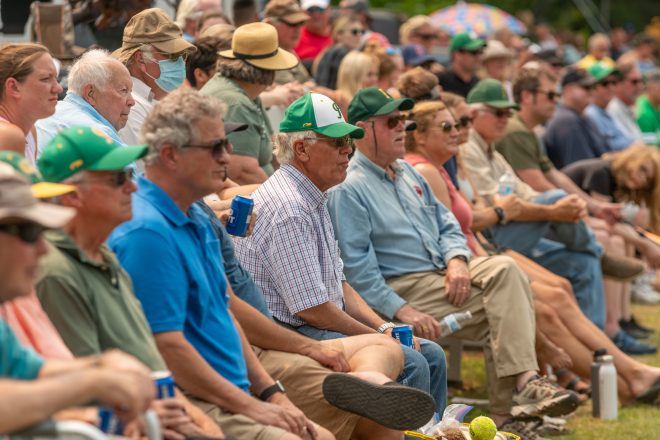 Kolberg avoided a playoff clash with the notorious crowd on Washington Island by winning their matchup int he final game of the regular season. The Islanders will instead travel to the southernmost field in the league to take on Kolberg in round one on Aug. 22. Photo by Brett Kosmider.

After a season canceled due to the pandemic, the 2021 version was much anticipated and it did not disappoint.

Sister Bay won the crown for the fifth time in seven seasons and all playoff roads will go through the Bays home turf if they continue their dominance. The playoffs will begin Sunday. Here is a look at the games.

These two teams will clash for a second week in a row and let me tell you, there will be no shortage of fire on the field and in the stands. The Braves pulled away late Sunday to topple the Islanders and earn the right to host the first-round playoff game.

Anyone familiar with the league knows the Island is a tough place to play as Kolberg found out earlier in the year. By winning Sunday however, the Braves will now host the Islanders and that could be the difference-maker.

The teams boast some of the top pitchers in the league, with Kolberg sending out Jake Schneider and Trevor Reinhardt to matchup with Alex Johnson of the Island. But while the pitching might be stellar, the offensive side for both teams can shake a game up in a hurry. The Braves had four of the top 10 hitters for much of the season as Schneider, Austin Rohe, Kyle Routhieaux and longtime veteran Derek Raye paved the way. The Island at times can hit with anyone as they too have great hitters up and down the lineup. Luke Geiger and Ray McDonald have led the team for much of the year but with the likes of Caleb Cornell, Matt Petersilka, Matt Foss and Ben Johnson at your disposal, Manager Joey Cornell has to like his chances. These two teams split their two meetings this year with the home team winning each time.

Prediction: Pretty simple to me. Home field means an awful lot, especially in the playoffs, and the Braves only lost once at home all year. I am going with Dave Neinas and the Braves.

The surprising Cubs make the playoffs for the first time since 2014 and only the second time since 2008. Coach Kyle Volkmann has assembled a young team that basically doesn’t care if you believe in them or not.

They started the season getting 28 hits the first two games, which was something lacking with the club for a few years. Toss in some young arms, and things are looking up in Institute.

Robby Pollman has kept the team in games and the addition of Veteran Kyle Ploor has given the Cubs an extra arm and a solid bat. The three Pflieger brothers –– Josh, Jarod and Jacob –– have given the cubs some needed defense and speed in the lineup. The Cubs lost their last two games of the season but got some help from their opponent this week to make it in.

To quote former NFL Head Coach Dennis Green’s famous line, ‘They are who we thought they were’. Nobody is surprised that the Bays won another regular-season title. They have the arms, and they have the bats to – on most days – walk through the league. Sam Forkert has been a mainstay on the hill but having a quality relief pitcher like Matt Hecht doesn’t stink either. When the Bays pitchers aren’t making your hitters look silly, they bring a bevy of all-stars to the plate. Forkert and Hecht can help themselves, but toss in Stewart Larson, Tom Sawyer, Griffin Cole, Sawyer Johnson and Bubba Laughlin, and the opponent has its work cut out for them.

Prediction: What you may not know is the Cubs played the Bays tough twice this year, losing 12-9 and 8-4. The Bays aren’t really the type of team to just coast into the playoffs having won the title so I expect coach Alex Higgenbotham to have the team ready with their A-game. They say it’s tough to beat a team three times in a season, but the Cubs are young and the Bays are just that good.

League managers honored Sam Forkert of the Sister Bay Bays as Pitcher of the Year for the second time. Forkert led the Bays to the regular season championship. Joe Cornell of Washington Island was named Manager of the Year after guiding the Islanders into contention and into the playoffs. Kyle Routhieaux won the batting title with an average of .439.