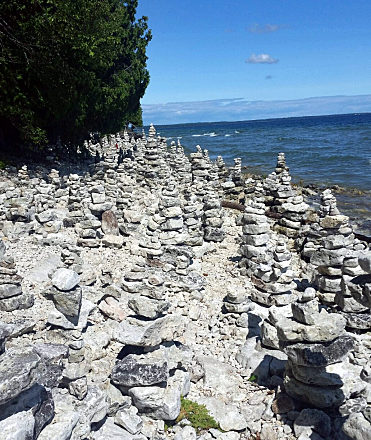 The Door County Airport and Parks Committee decided at its Oct. 12 meeting to leave the issue of building cairns – or stacks of rocks on the shoreline – alone after Door County Supervisor Megan Lundahl requested some action by the county at Cave Point County Park.

“The basic issue with cairns is that the understanding that no one individual should alter or personalize any part of the park has been lost,” wrote Lundahl in a letter to the committee, citing safety as another concern.

But committee members were not eager to address Lundahl’s concerns, saying that most of the towers are built on Whitefish Dunes State Park property or within the ordinary high water mark, which is under jurisdiction of the state.

“I think we should just ignore this totally. It doesn’t pertain to us,” said committee member Ken Fisher. “Let’s not be childish folks, we don’t want to do anything with this.”

The committee discussed signage at the park to explain the danger of the cairns, some of which stack more than six feet high, for young children and providing education about preserving the natural state of park land. But, for the same reason there are no signs warning of the cliffs at Cave Point County Park, the committee dismissed that as well.

“[Corporation Counsel Grant Thomas’] take on this is once you put signs on it saying danger, you’re admitting to the public that there is a liability there,” said committee member Richard Virlee.

“I’d certainly run it by Grant before we put up any signage,” said Airport and Parks Director Erik Aleson. “It’s a hard situation because obviously we can’t be there 24/7 and we don’t technically have anything in the county ordinance prohibiting it.”

While the Pulse has received several letters to the editor disapproving cairns, other groups have embraced them. Photos of the towers are used in promotional material, while the Ellison Bay Service Club dedicated a cairn in 2011 in honor of the area’s native history.