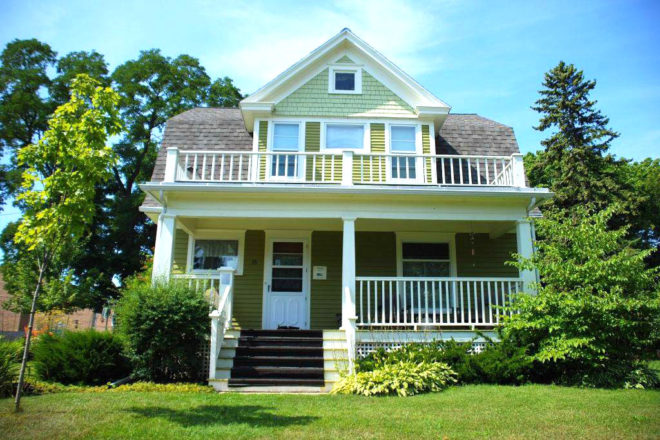 Door County has not had any in-county, residential options for people experiencing addiction and alcoholism who are transitioning to clean and sober living since the nonprofit Kimberly House (shown above) at 33 N. Joliet Ave. in Sturgeon Bay closed in 2015. That home had been in operation since 1997. Finances were apparently responsible for its closure.

“We have found a house” is a phrase uttered by the few who are lucky enough to have done so during an incredibly tight housing market.

It was said this week by Joe Krebsbach, health and human services director, about the duplex that could become the County of Door’s Sober Living Facility. The transitional facility would rent rooms for $400 per month to people experiencing addiction and alcoholism who need a safe place to practice clean and sober living.

“We put an offer in on that house last Friday and are waiting for a response from the sellers,” Krebsbach told his Health and Human Services oversight committee May 9.

The process of buying a home becomes more complicated when the county is the buyer. Krebsbach was authorized to make the offer of $350,000 and a counteroffer if needed. Before the deal is done, the contract would have to return to the Finance Committee for a recommendation and then the full Door County Board for approval.

That process has “been part of the challenge,” Krebsbach said, with buildings moving quickly off the market before an offer could be made. His department has been in the market for a facility for well over a year.

The duplex, located within the City of Sturgeon Bay, would house up to eight people and allow men and women to be separated. With a waiver granted by the city, there could be more capacity.

The county has not had a sober living facility since the Kimberly House closed in 2015.

The new facility would be rented to qualified individuals who are receiving county services, whether through a treatment-court provider, case manager or therapist. Drug testing would be part of the arrangement, but a peer support structure would be used rather than live-in care or managers. The county could use the home as an alternative to out-of-county, inpatient treatment by pairing a three-month living arrangement with intensive outpatient counseling and services. Or, those transitioning out of inpatient care could live there while practicing sobriety.

Those affected by alcohol use make up the highest proportion of individuals in need of treatment in Door County, Kresbach wrote in a summary of the project. However, the county saw a 100% increase in individuals with either opioid or methamphetamine dependence in 2020 and 2021 compared to 2018 and 2019.

The building would be purchased with some of the $5.3 million allocated to the County of Door in American Rescue Act Plan funding. There is also Enhanced AODA [Alcohol and Other Drug Abuse] Block Grant funding to furnish the home and help with program start-up, as well as money from an opioid litigation settlement the county will receive for approximately $794,000.

The building purchase is only the first step. Kresbach said it would take time to develop a successful program that delivers long-term benefits. Two options to operate the home are being considered, including a staff person and a contracted service.

The home would generate some income through rentals. More than that, it could save the county inpatient costs, which are “very hard to predict, very hard to control,” Krebsbach said.