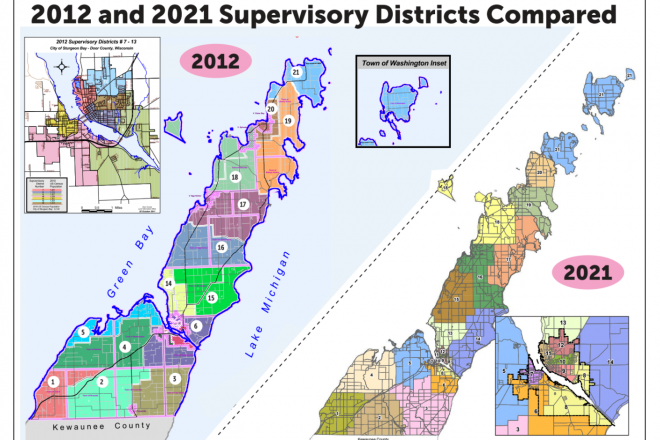 These maps show the existing 21 county supervisory districts created in 2012, as well as the new district lines approved by the Door County Board of Supervisors last week. The county’s new district plan is considered tentative until municipalities have adjusted their wards to conform with the new district boundaries and have returned those ward plans to the county by Oct. 18. The county board will approve the final district plan in November, prior to the date when public notices are posted for the spring election. Candidates may begin circulating nomination papers Dec. 1, 2021, to run for office in the April 2022 election. Those filings are due Jan. 4, 2022. All 21 county board supervisor seats are up for reelection. Source: County of Door.

In August, the U.S. Census Bureau released the data necessary for state and local governments to redraw the political-district maps that will be in place for the next 10 years. While state lawmakers wrangle new district lines into place for the state’s 99 Assembly seats, 33 Senate seats and eight congressional districts, counties map out their own districts.

Door County appointed an ad hoc committee that worked with county staff to get the job done, and the Door County Board of Supervisors approved those once-in-a-decade maps last week for the county’s 21 county supervisory districts.

The number of districts has remained the same, but the configurations have changed – some significantly. The changes eliminated long and linear districts and accommodated Door County’s population growth of 8.2% to 30,666 people. Municipal-level population changes have not been released to the public, but Door County Administrator Ken Pabich said the population increases are largely in the northern part of the county.

“There’s nothing you can do to change that,” Pabich said. “That’s what the census gives us to work with.”

Values that guided the mapmaking included creating compact and contiguous districts – “no gerrymandering,” Pabich said. Gerrymandering is the process of manipulating boundaries to favor one political party. Each district also needed 1,432 people per district, a number that could deviate by 2%, or 29 people, within any given district. In the maps adopted in 2012 following the 2010 Census, each district contained 1,320 people.

The maps the supervisors approved unanimously did not significantly change Districts 1 (Union and Brussels area), 2 (Brussels and Town of Forestville area) or 3 (Town of Forestville, Town of Clay Banks, Village of Forestville area). The shapes of Districts 4 (Gardner and Nasewaupee area) and 5 (Gardner and Nasewaupee area) changed completely because the maps drawn following the 2010 census were linear, and this time around, the county wanted to make those districts more compact.

“So we had an opportunity to address that,” Pabich said.

Within the City of Sturgeon Bay, the districts became more dense, in keeping with the higher populations per district, and one – District 6 – now spills out of the city into Southern Door.

“They are all similar in location and size, and one [district] had to jump outside to make sure they had equal representation,” Pabich said.

Many towns in Door County had split representation with the existing maps. The new maps also divided the Villages of Ephraim and Sister Bay into two different districts.

County Board Chair Dave Lienau proposed that they create one district that included the entire Village of Sister Bay, rather than separating it into supervisory districts. He withdrew his amendment after discussion on the county board floor last Tuesday. Although one of the goals of redistricting is to keep municipalities together, Pabich said keeping those villages in one district made the surrounding districts less compact.

“You can go either way and argue it’s better to have the community all together, but as a county board supervisor representing the county, they felt the maps were better in terms of the spirit of their representation, and they chose the compactness,” Pabich said.

“So if they choose to run again, they’d be running against one another,” Pabich said about each of the doubled-up districts.

Conversely, that left two districts – Districts 5 in the Nasewaupee area and District 20 in northern Door County – with no incumbent supervisor living within the new boundaries. The voters in those districts would elect a new supervisor during the April 2022 election.

If the supervisors weren’t all happy with their new districts, Kohout reminded them that redistricting was about fairness for voters, not elected officials.

“It’s supposed to be the best for the people, and not for us,” Kohout said.

Pat Scieszinski, chair of the League of Women Voters of Door County, said the county’s new maps were the “closest to the fairest way to represent the county and the community.

“With the required parameters of equalized population, compactness and contiguity, one seemingly small change in a district line can skew and affect the entire map,” Scieszinski said. “The proposed map was drawn using those parameters and without consideration of where current supervisors live, which is the way it should be.”