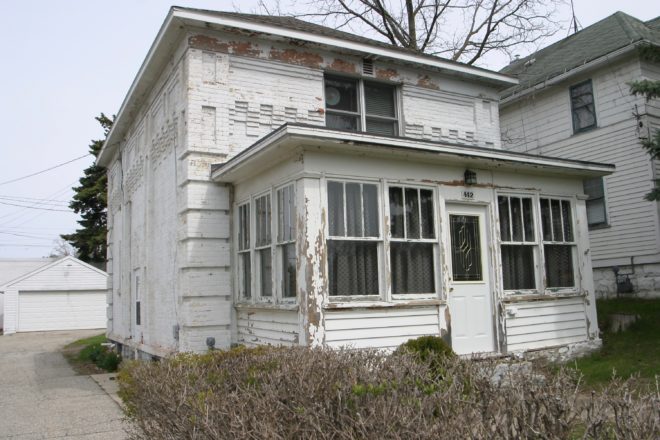 The county is offering the home at 442 Michigan St. to anyone willing to move it off the property. Submitted.

With the recent acquisition of the Younkers building next to the Door County Historical Museum, the county has been pondering what to do with the house at 442 Michigan St. that was purchased for $89,000 in August 2008 to serve as archival storage for the museum.

At its May 8 meeting, the county Facilities & Parks Committee voted to recommend to the full county board that the county keep the property where the house sits, and offer the four-bedroom house to anyone who has the wherewithal to move it to his or her own property.

Corporation Counsel Grant Thomas gave a brief history of the house. At the time of the county purchase, he said there was a move afoot to have the house listed as historical property because at some time in the city’s past, it briefly served as the jail, or, as it is quaintly referred to in documentation, the “Old City Lock-Up.”

Thomas said he and then-county Administrator Michael Serpe convinced the powers that be that such a designation could cause future “pitfalls and traps” for the county.

Committee Chair Dan Austad pointed out that although being the old jail was one excuse to buy it at the time, it served in that capacity for such a short time that to play it up would be ridiculous. Austad suggested the building either be offered to the public or demolished.

Thomas admitted there could be a “hue and cry” if the county attempted to demolish the house when there were attempts to get it historically registered.

“How do we avoid the mini-granary situation?” Austad asked, referring to the ongoing brouhaha regarding the Teweles and Brandeis granary.

“I honestly think somebody would be interested in moving the building,” Thomas said.

“Let’s keep the land,” said committee member Helen Bacon. “It’s a cute building. If somebody would want it, I’d prefer it be used versus being destroyed.”

County Administrator Ken Pabich said the first goal is to move the museum’s archival material to the Younkers building.

Facilities & Parks Department head Wayne Spritka said the county currently has utility costs for the building, a fact that seemed to help the committee to vote unanimously to recommend to the county board that the house be removed from the lot or – if no one is interested in moving it – demolished.

In other matters, the committee:

• Accepted a new round of bids for the Interpretive Center at Cana Island Light Station. Six bids were rejected by the committee earlier this year when they came in much higher than expected. Spritka said the new bids came in at $95,000 less than the previous bids, putting the entire cost of the project at $592,624. With the earlier bids, the total cost had climbed to $670,000.

• Heard from Parks Director Ben Nelson and Becky Kerwin of the county Planning Department about the revised parks master plan they are working on. A public hearing on the master plan is expected later this year.

• Nelson also gave an update on the two grants he has submitted to pay for the purchase of a 72-acre wooded property to be added to Door Bluff Headlands County Park. He said he applied last week for a Knowles-Nelson Stewardship Grant that he should hear about in October, and he expected to learn in June whether the county will receive a Great Lakes Restoration Initiative Grant. The county bought the property for $450,000 with the expectation that grants would cover the purchase.

• Sent back to the drawing board a pavilion for LaSalle Park in Clay Banks. The proposed design was to be a gazebo just like the one at Cave Point County Park, but Nelson said the bid estimate for that came in at $138,000, and the county had budgeted only $75,000 for the project.

Design firm Keller was instructed to come up with a square, open pavilion like those at Forestville and Pinney parks.

• Authorized Nelson to learn the costs of extending the Ahnapee Trail in Sturgeon Bay about a mile north to the Egg Harbor Road roundabout. Several members of the committee worried that this did not seem to be a high-priority project and that it could detract from other projects the county might want to pursue, but Nelson said there are at least a couple of trail-specific grants he could pursue. Committee members Randy Halstead and Richard Virlee voted against the idea.

• Learned that a plaque dedication for the 73 victims of the Oct. 8, 1871, fire in the vicinity of Tornado Memorial Park will be held Sunday, June 2, at 1 pm.