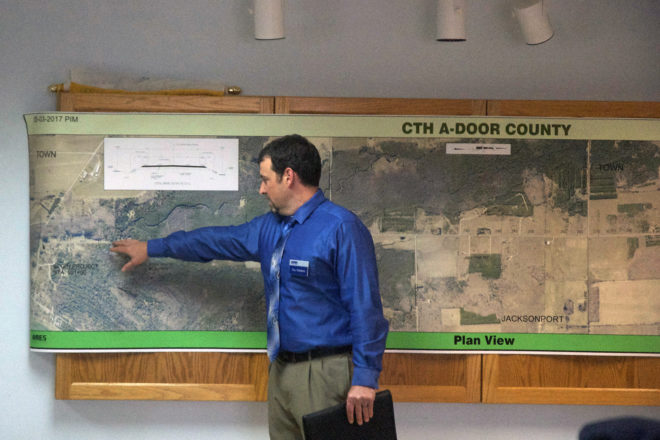 Troy Robillard of Ayres Associates, the company hired to do the engineering for the work on County A, explains the project at a meeting at Jacksonport Town Hall on May 3. Photo by Jim Lundstrom.

The county usually repaves roads with little more than a public notice that it will be happening, but when the federal government is involved in the funding, public involvement is required, which is why a public meeting was held May 3 at the Jacksonport Town Hall to discuss the repaving of County A.

Door County Highway Commissioner John Kolodziej said the county has already received funds for the engineering portion of the project, and has hired Ayres Associates to do that work. He was joined by Troy Robillard of Ayres to explain the relatively simple project of removing the 4½ to 5½ inches of asphalt from County V to County E and replacing it with 4½ inches of new asphalt.

The funding comes from the federal Surface Transportation Program – Rural, which provides funding to improve county trunk highways. Kolodziej said he would submit the application for the actual work in June, but doesn’t expect the funds to become available before 2020. Robillard added that they should have a construction date later this year or early in 2018.

The repaving project will match the current footprint of County A, with 11-foot lanes. The three-foot gravel shoulder will be paved, with possibly a foot of gravel beyond that.

At the request of county government, Ayres was also tasked with looking at constructing an off-road bike trail along County A, but Kolodziej said due to the cost, the county is going to look at that as a separate project.

An audience member expressed concern about rutting on County A and asked what the load limit would be on the new surface. Kolodziej said state standard for weight limits is 92,000 pounds, which was increased from 80,000 pounds two years ago to accommodate large agricultural vehicles.

Kolodziej added that the rutting probably has less to do with heavy trucks and more to do with the age of the road. He said the county performed chip and seal repairs on County A six years ago.

“What you have there is several layers of asphalt done in the last 40 years,” he said, adding that the designs and products used to build roads today are much better than they were then.

Robillard appealed to area residents who know the area well to inform the county of any culverts along the roadway that have drainage problems. He said once the work is underway, it should not take more than three months, and the road will remain open to traffic.

Asked who would be responsible for mailboxes that might be in the way, Kolodziej explained that if a mailbox is in the public right-of-way, it is there, essentially, by permit of the county.