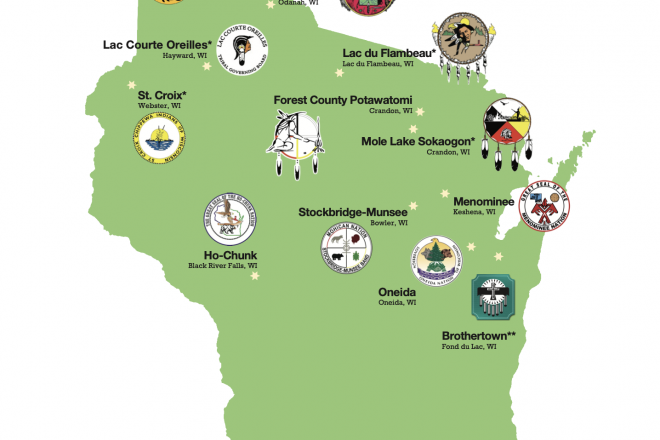 The Door County Board of Supervisors approved a land acknowledgment statement that recognizes the peninsula is the ancestral homeland of the Menominee people, one of the 11 federally recognized Native American sovereign nations in Wisconsin. Shown on the map are the locations of the seats of those 11 tribal governments. Source: Wisconsin Department of Public Instruction

Menominee spokesperson said the statements show a sign of respect

Door County has adopted a formal statement that recognizes the ancestral lands of First Nations people.

The land acknowledgment statement, passed 15-5 by the Door County Board of Supervisors on Aug. 24, recognizes that the peninsula is “the ancestral homelands of the Menominee Nation,” and one of “11 federally recognized Native American sovereign nations in Wisconsin. We acknowledge these indigenous communities who have stewarded this land throughout the generations and pay respect to their elders past and present,” the statement reads.

The statement is a gesture of respect, dignity and solidarity, according to the supervisors who voted for it.

“I don’t see any downside to doing it,” said Supervisor and Vice Chair Susan Kohout. “We are leaders, and actions matter.”

The resolution itself calls the statement a “small step toward correcting the stories and practices that have misappropriated and erased the history and culture of Indigenous People. Land acknowledgment is only one small part of supporting indigenous communities. We hope our land acknowledgment statement will inspire others to stand with us in solidarity with Native Nations.”

Land acknowledgment statements can be read before government meetings and at public events. Door County intends to read it aloud after roll call and before the presentation of the agenda at the county board’s annual meeting.

Supervisor Bob Bultman, who chairs the county’s Legislative Committee, out of which the statement evolved, said during the county board meeting that they did not have other county examples to follow.

“We’re the prow of the ice cutter,” Bultman said. “We’re leading by example.”

Land acknowledgment statements and the reading of them before official meetings has become a more common practice in Canada, Australia and New Zealand. In the United States, a search uncovers cities across the country increasingly adopting them, but little in Wisconsin beyond private institutions and public universities.

Melissa Cook, intergovernmental affairs manager for the Menominee Indian Tribe of Wisconsin, said by phone that acknowledgments have been taking place, or at least the research leading up to them. Some of their tribal members had been invited by some Wisconsin cities and counties to review and discuss statements. The City of Oshkosh invited tribal members to attend a meeting where a proclamation was read.

For any government looking at adopting a statement, Cook said they are valuable and appreciated because they show a sign of respect that Native Americans were here before Europeans arrived.

“It just creates that sense of community and understanding,” she said.

The statements are more common among private organizations and public institutions, such as Northeast Wisconsin Technical College, the University of Wisconsin System and other private and state universities across the country. Door County’s statement was modeled after Lawrence University’s statement, adopted in 2018.

That statement’s identification of the Menominee was based on scholarship that’s been done on the indigenous people who have lived on the peninsula since the glaciers receded. Other tribes lived on the peninsula, such as the Ho Chunk and the Potawatomi, and “migrations happened; people came and went, but the groups that made this their home were the ancestors of the Menominee,” Bultman said.

The idea of having a land acknowledgment statement came during the Door County Land Conservation Committee’s recent work on the latest Land and Water Resource Management Plan. That suggestion was forwarded to the Legislative Committee, which recommended the statement to the full county board.

Supervisor Elizabeth Gauger, a member of the Legislative Committee, said she had a lot of questions when they first began researching the issue.

After much research, the committee decided the statement harms no one and offers a sign of respect and solidarity.

“The bad land acknowledgment statement is not to have one,” Bultman said.

Some of the supervisors who voted against the resolution – Dave Englebert, Dave Enigl, Dave Lienau, Nancy Robillard and Todd Thayse – said they appreciated the preservation of the peninsula’s past and the historic acknowledgment of people who lived here, but they did not think that was a role for the county board.

“I’m really not on board with things like this,” said Supervisor Todd Thayse. “I don’t understand how it’s benefiting us, other than reading it once a year.”