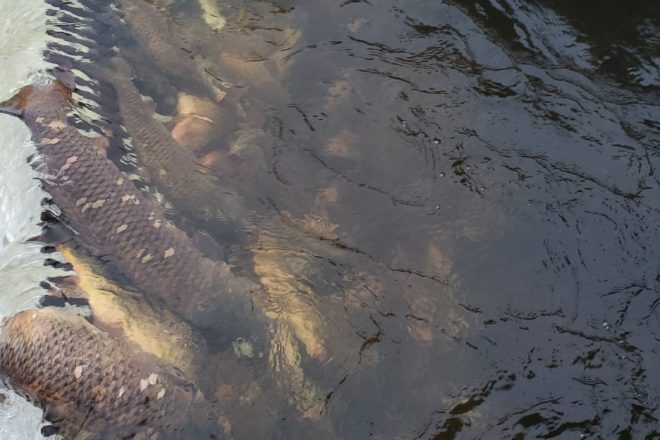 Fish stuck at the dam on the Forestville Millpond. Photo submitted by Robert Sijgers.

“Based on the size of the rocks and how they were laid out, [it] leads me to believe that somebody intentionally placed the rocks there to slow down the drawdown,” said Ben Nelson, superintendent of Door County Parks.

Nelson said the bowling-ball-sized rocks, which were likely taken out of the river downstream, were placed in a “neat and tidy line” against the dam’s gate.

The department was notified Dec. 13 of fish stuck near the dam’s gate. Parks staff closed the valve of the dam to stop the flow of water in order to remove the fish. The boulders trapped approximately 120 fish, most of which were still alive. The fish that died were primarily carp.

The department does not know who placed the boulders at the dam. Security cameras at the site to help monitor the drawdown were out of batteries and therefore did not capture the alleged act. Nelson said the batteries on the cameras have been replaced, and county staff and representatives have been notified.

“We’ve notified people on our committees so there are more eyes on the park itself,” Nelson said. “Hopefully we won’t experience anything like this again.”

The two-year millpond drawdown is expected to result in compaction of sediment, which will improve water quality in the millpond and downstream. It is also expected to aid in invasive-species management.

The drawdown, however, met with fierce criticism from some county residents who feared the process would devalue properties, restrict recreational activities and fail to achieve the project’s goals.