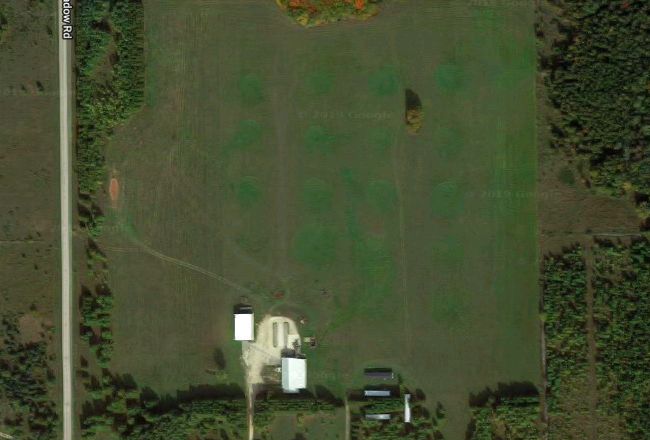 A plan would have located seasonal workforce housing at the site of a former cherry processing plant at West Meadow and Ahrens Road in Baileys Harbor. Source: Google Maps.

When the Door County Board of Supervisors voted Aug. 27 to change campground rules based on a recommendation from the Resource Planning Committee, it essentially pulled the plug on an award-winning plan for seasonal-workforce housing.

Greg and Jamie Schab spent more than a year of their time, energy and money on a plan to turn a former cherry-processing plant on Ahrens Road in Baileys Harbor into a campground for J-1 visa seasonal workers. They had planned to build a home on the property for themselves and their two sons, and create 16 14-foot-by-28-foot cabins to house as many as six seasonal workers in each unit. An existing building was to be converted into bathrooms, showers, a laundry facility and a general store.

But in an email to the Peninsula Pulse after the county board voted to limit cabins at country campgrounds to 20 percent of campsites, the Schabs wrote, “Due to the lack of support by the county and community members, we have decided not to pursue the property at Ahrens Road. This is a complete loss for all those coming to Door County to work. The business owners will continue to struggle each year due to the lack of housing. We are grateful to all those that encouraged us and supported us with this project.”

The Schabs and their idea for the seasonal-housing solution were recently recognized by the Door County Economic Development Corporation (DCEDC) as winners of the 18th annual Door County Entrepreneur Training Program Business Plan Contest.

Jim Schuessler, DCEDC’s executive director, said this latest denial of a viable project will make his job that much harder.

“There are developers that will not develop in Door County because of the reputation it has earned,” he said.

Regarding the Schabs’ project, Schuessler said, “I think this was really avoidable.”

In addition to the county board’s vote on the number of cabins allowed at a campground, Schuessler said a misinformation campaign also worked against the project.

“People made me aware of what was going on on social media,” he said. “You knew there was a lot of misinformation out there. I had people calling me, too. The things they were concerned about were not accurate. I tried to calmly explain to them that there would be community meetings, and the plans would be laid out.”

In June, the Schabs sent a letter to 19 property owners in the vicinity of the Ahrens Road property to explain what they had in mind, in the hope of starting a discussion with potential neighbors.

“However, a few neighbors responded with incorrect information, threats of legal action, declaring to do everything in their power to stop our project, and saying we are not welcome in Baileys Harbor,” the Schabs said. “It is very difficult to have a meaningful conversation when receiving that type of response, especially when it’s against our family and a group of seasonal workers they’ve never met.”

“At times they were attacked personally, and a lot of incorrect information [was] spread across the county,” Schuessler said. “My favorite call was one I received this past Sunday, where I was informed that the Schabs would be sued for civil-rights violations since the cottages did not have individual washroom facilities. My, I did not realize all those years [when] I camped with my family at Potawatomi State Park and we took those long walks to the washroom [that] our civil rights were infringed.”

That misinformation campaign also reached the county board supervisors, several of whom mentioned at the Aug. 27 meeting that they had been hearing from people who were against the Schabs’ plan.

The county board’s campground vote was based on a recommendation from the Resource Planning Committee, which decided on the 20 percent cabin rule for campgrounds after a public hearing was held on the Schabs’ plan at its Aug. 15 meeting.

“It would have been helpful if members of the Resource Planning Committee had met with DCEDC and the Schabs, which, based on my experience, would have happened in other counties in which I have served,” Schuessler said. “This end may have been averted. There was no mechanism for reach-out for the county board. They created policy that killed the plan – policy more onerous than state policy. They appear to have created policy to choke this out.”

Although all of these things have soured the Schabs on building a home and starting a business in Door County, Schuessler said all may not be lost.

“The key will be working with a local community that does not fall under county zoning,” he said. “Note I said working with because that is what DCEDC and the Schabs attempted to do in the now-dead project.”