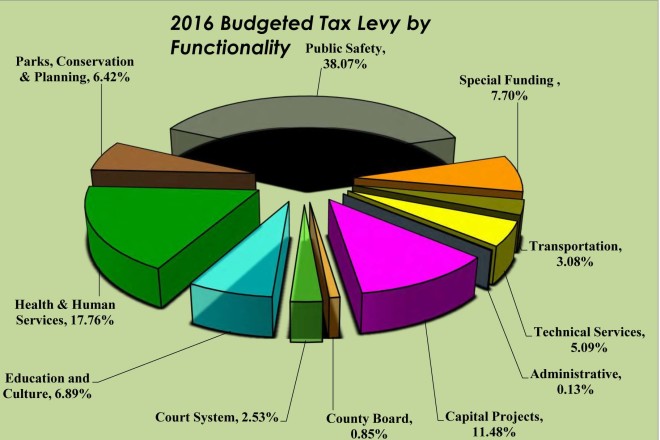 The county budget serves a number of purposes, not the least of which is providing a financial and operational blueprint for department administrators. It also serves as a policy statement approved by the county’s elected officials. Finally, for the public, the county budget is a document that shows how resources are allocated, so should give a better understanding of the many things county governments do.

In fact, County Board Chair Dan Austad congratulated Finance Director Mark Janiak for providing the most detailed budget he has seen in his 35 years on the board.

“They’ve got everything in this thing,” he said. “If you read it, as I’m sure you all have, you’d know a lot more about county government.” (you can find it online here: http://map.co.door.wi.us/Admin/2016%20Proposed%20Budget%20Book.pdf)

Much of a county’s budget is subject to state statutes. For example, state statutes dictate that the county administrator or executive must submit a budget proposal to the full board by Oct. 1. But the work begins months earlier, with department heads working with their various oversight committees to come up with their individual department budgets.

State statute also puts a damper on county budgets through levy limits. Since 1992, each county’s operating levy has been limited to no more than an amount based on its prior year’s allowable levy plus an adjustment equal to the percent change in the county’s equalized value (net new construction). A county may circumvent the levy limit law through referendum.

County Administrator Ken Pabich praised Finance Director Mark Janiak and former director Shirley Scalish who helped put the budget together without dipping into reserve accounts, as has been done in past budgets.

However, he warned that “we still need to be very cognizant of our spending” due to the 1992 statute that capped equalized value at $3.90.

“We’re about $1.9 million below that right now,” he said, “But look at our natural growth and stuff outside of our levy limit. That’s going to be a number we have to keep an eye on.”

The budget was adopted unanimously, and the board moved on to a resolution for county board compensation that Austad said had to be dealt with before people can take out papers to run for the county board in the April 2016 election.

The resolution would have increased the rate of pay for supervisors to attend county board meetings from $150 to $200, and $50 per hour for attending meetings and conferences, up to eight hours. The current rate is $25 an hour. It would have been the first pay raise since the rate was changed from $125 to $150 in April 2000.

“I am very, very, very much opposed to this,” said Supervisor Susan Kohout, who pointed out that the board spends a lot of time discussing and scrutinizing county employee pay rates and telling department heads to conduct business with zero percent growth. 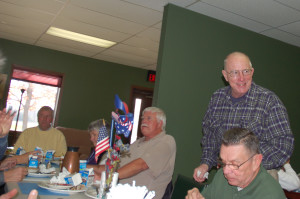 County Board Chair Dan Austad (standing) treated the county board supervisors and media to a baked chicken lunch at the Senior Center in Sturgeon Bay after the Nov. 10 budget deliberations. Photo by Jim Lundstrom.

“We are guardians of the taxpayer dollars,” she said. “In the spirit of fairness, we should follow our own advice. First of all, we are very adequately compensated.”

Kohout explained that she asked County Clerk Jill Lau to track down payment rates for other county boards in the state. She found a survey that 35 of the 72 counties responded to.

She said county employees wages are designed to “meet the market” for the skills.

Supervisor Don Sitte amended the resolution to keep the rate at $150.

Supervisor Joel Gunnlaugsson, representing Washington Island, said even though he has the farthest to travel for meetings, he agreed with Kohout. However, he took issue with the $60 rate of compensation for lodging when he is required to stay overnight on the peninsula.

“You can’t find anywhere to stay for 60 bucks a night,” he said. “I try to stay at the cheapest, but that’s not a real number. I don’t think I should have to lose money to come down and stay.”

The board agreed and changed the amount to read “going rate.”

The $50 an hour rate remained after Supervisor Steve Sohn said $25 is not fair for working people.

The board also awarded the bid for a feasibility study and cost analysis of the former highway shop to Venture Architects. Although Venture’s bid of $17,200 was not the lowest, Property Committee Chair Richard Virlee said Venture is teamed up with Immel Construction of Green Bay, which was been doing the work on Cana Island Lighthouse.

“I thought having dealings with these people on other projects was the way to go,” he said.

The resolution passed unanimously. Venture has two months to provide the study.