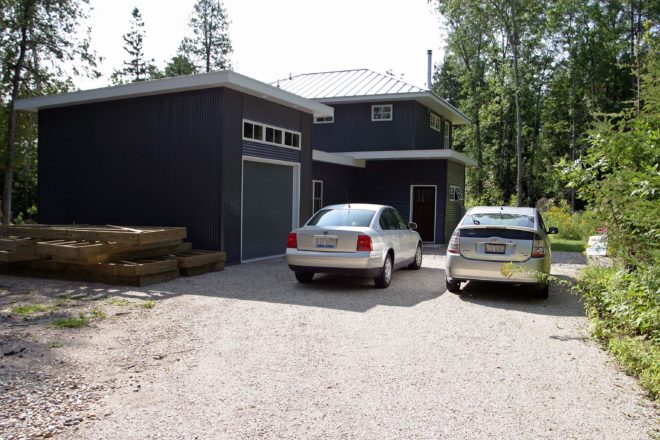 “We pretty much love everything about it, and it works well for us,” Field said.

“Even in the dead of winter,” Later added. “You go to bed at night and the house is 60 degrees, you wake up in the morning and it’s 59, which is the best thing about this house, its tightness.”

Theirs is the third Temme-designed home in Door County built as a Leadership in Energy and Environmental Design (LEED) for Homes Platinum candidate. The previous homes – in Ellison Bay and Sturgeon Bay – achieved the highest Platinum status through a series of tests to prove their environmental soundness and efficiency.

By the time you read this, Tom Krawczyk of TJH Energy Consulting, Lake Geneva, Wis., should have already run the new home through a battery of tests for tightness and efficiency on its way to certification. 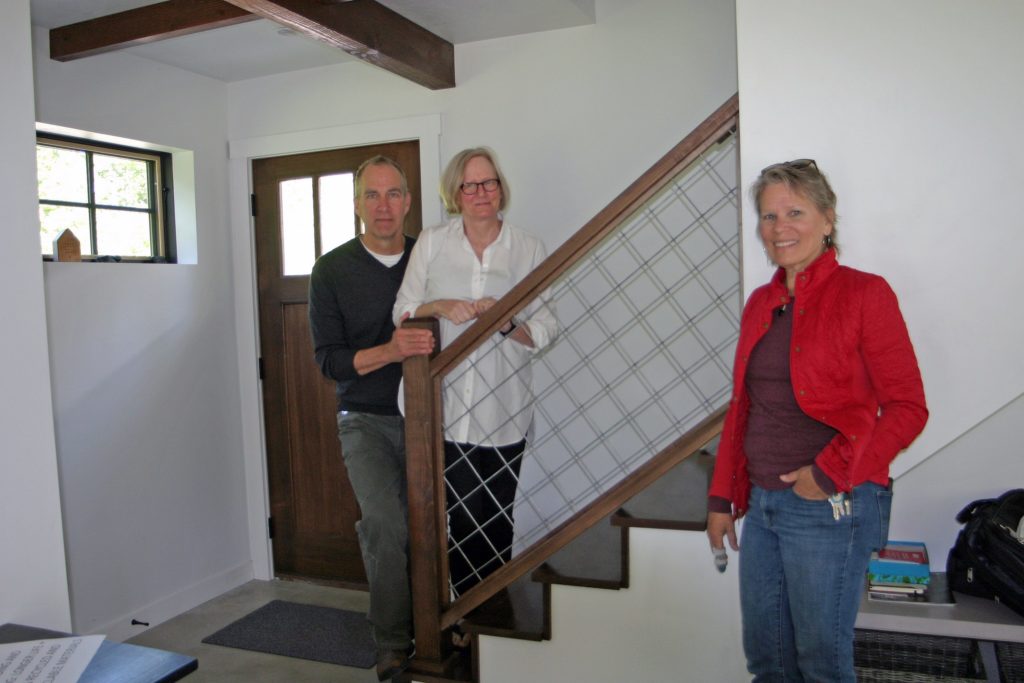 The homeowners are Chicagoans with a long connection to Door County, especially Field’s family, who have had summer – meaning unheated – cottages here for a century.

“Now we can come up in the winter,” Field said.

“When are you moving here?” Temme asked.

“We’re trying to figure that out,” Later said, explaining that he just retired after 35 years as a Chicago city planner.

However, Field continues to work as executive producer of Chicago Tonight for the PBS station WTTW.

They have owned the previously untamed piece of property off bucolic Kinsey Bay Lane for a long time.

“There was nothing here before,” Later said. “The first time we saw this property it took us 20 minutes to walk to the lake through all the trees. It’s a great site. We saw the potential.”

They also had some ideas about the sort of home they wanted.

“Virge has a reputation in Door County as a green architect, and that’s what we were interested in,” Later said.

“And it’s a difficult site. Not a simple project,” Later added.

They learned that before they met up with Temme in 2014, when they asked another design builder to look at the property.

“He came out, got out of his car, and, no, he was not interested,” Later said.

Whereas Temme will tell you:  “Whenever you get a challenging lot, that’s a lot more interesting than just plopping a house down.”

The couple also wanted an efficient and low-maintenance home.

“We wanted all the mod-cons, but efficiency,” Field said. “We were looking for low maintenance on the outside.”

“We went for the metal siding to keep the cost down, and it’s more enduring,” Temme said. “It has so many advantages.”

Two major challenges for the project included containing costs to a budget and dealing with the Department of Natural Resources and county zoning on wetland regulations. Temme said the project was delayed for almost a year in dealing with wetland issues, all of which have been or are being resolved.

While they were not allowed to build a driveway bridge over a small swath of wetland, they were allowed to cut a 30-foot swath of forest to allow a lake view from the home.

Inside, the home feels warm with light and clean lines, an open, inviting and uncluttered atmosphere.

“Two stories, pretty compact, but plenty of room for us,” Later added.

“It took a long time to get from concept to construction,” Temme said. “There were some hiccups along the way, but Mary and Tim have been patient, understanding and flexible on things. What appealed to me about working with you two was your love of nature. You wanted to integrate nature and not disrupt everything. That’s a very important quality that I look for in a client.”