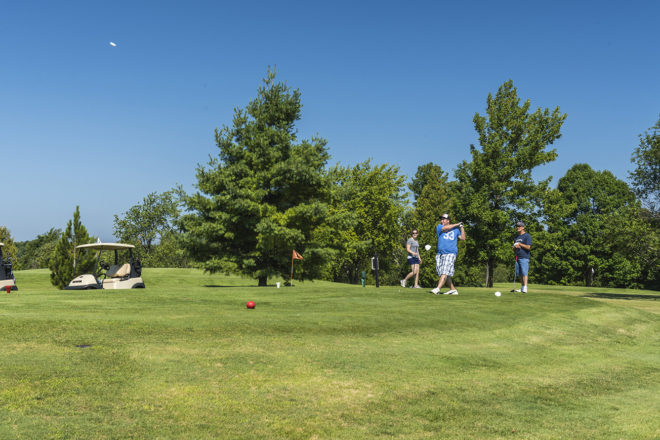 Of all the barriers to entry in the world of golf, and there are many, intimidation is the cruelest.

You stand on that tee box, knowing only generally where this tiny, rocklike sphere will go. Those ritzy houses out to the right all of a sudden possess more glass windows than any house should. Or how about that oncoming car traffic out to the left? And those increasingly agitated dudes playing behind you? These obstacles all seem so conspicuously placed. Then there’s the beverage cart gal, parking her cart out there in the danger zone. Why does she trust you so much? Hitting the fairway becomes not only the best result, but also the least worst. Yes, golf is intimidating; it’s also intense!

In no other sport does the idea of “taking it slow” make more sense than it does in golf, a sport with far more complexities than simplicities. But where exactly does a beginner take it slow? The putting green? The cart path? The driving range? You’re not making pars, birdies and bogeys on the driving range. You’re not actually playing golf.

All of this could explain one difficult aspect of the golf industry (where do the beginners go?) but it could just as well explain the importance of one spot in Egg Harbor:  Stonehedge Golf Course, quite possibly Door County’s best course for beginners.

Playing the role of little brother in Door County’s family of 11 courses, Stonehedge is a simple, 9-hole track. It can stretch to 2,100 yards, but only when it sticks its tummy out. There’s nothing intimidating about it. Just one mile inland from where Highway 42 slices through Egg Harbor, its red, wooden welcome sign butts up against County E. Its 4th hole runs along Heritage Lake Road. Everything else is somewhere in the middle of a 40-acre plot. 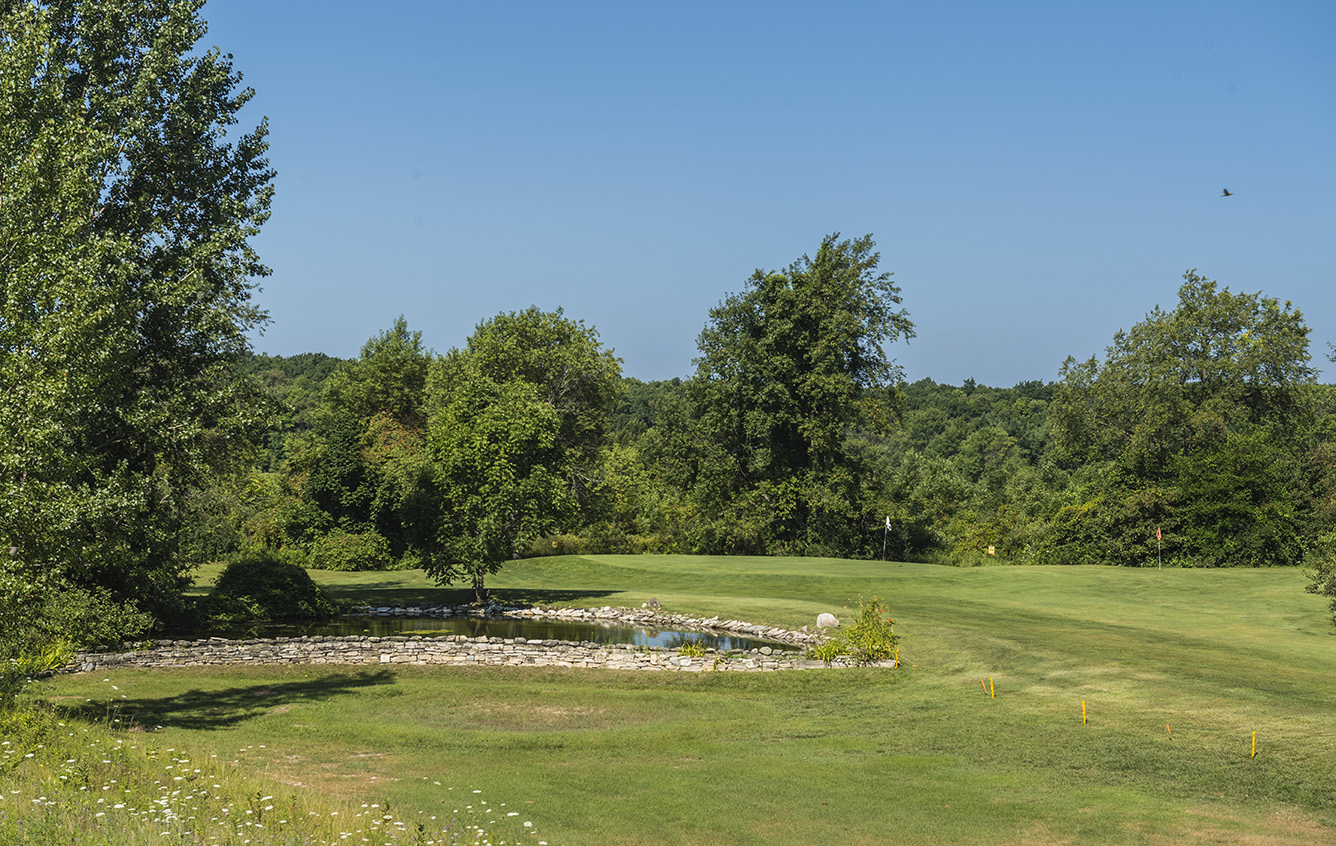 Telephone poles and cherry trees line the property. You might be able to fit 25 cars in its parking lot. If you head there right now, you’ll probably find owner Jon Oswald, greenskeeper Mark Merrill and maybe one more part-time employee running the show. It gives off this family-owned, family-run vibe, which makes sense since the course was originally created by just one family of four — the Coles — back in the late 1980s. It also makes sense that, for Oswald, families are a major part of Stonehedge’s audience.

“It’s the family course up here,” Oswald said. “You’ve got the kids out here. You can bring the spouse out that doesn’t golf as much. People expect to see the kids out there. Nobody grumbles when they are taking six or seven hits to get to the green.”

Oswald himself used to play a lot of golf. That was before he left contracting and bought both a golf course and a new job running it. He had played Stonehedge in the past because he’s attracted to short courses. He’s “not a big course guy,” which is either ironic or telling of his situation, as his course is just a driver and a 7-iron away from Door County’s longest course:  The Orchards.

Only about 400 yards separate the 4th green at Stonehedge and the 3rd tee at The Orchards, considered by many to be Door County’s best public course. By most metrics — be it proximity, difficulty or just its golfy charm — experienced golfers would say that you can’t really say yes to Stonehedge without first saying no to The Orchards.

The Orchards is beautiful. It’s sprawling. It’s unquestionably challenging. For the avid golfer, that’s everything you want; it’s just not everything to everyone. Inexperienced (or less-skilled) golfers may rightfully not know any better, or need any better, which is why Stonehedge fits perfectly just down the street.

“I don’t see us losing any business there,” Oswald said. “The people who want to play a full-length course, they’re going to play those courses. People that think ‘Oh, Stonehedge is a short course. I’ll burn right through it.’ The greens kind of catch you.”

Stonehedge’s 5th hole is a good example. Just 210 yards for a par-4? Give me my 4-iron! Once you reach the 8-paces wide, avocado-shaped green, you’ll know exactly what Oswald’s talking about.

“It’s very narrow and long and the green is sloped on both sides,” Oswald continued. “People on that one, they’ll hit off to the right of the green and try chipping up to it, then boom, they’re over on the left side of the green all of a sudden. They’ll go back and forth on it because there’s nothing flat on that one at all.”

It’s the kind of hole on which — by accord of its length — one should be able to par. But yet, with an extremely challenging green complex, it’s no simple par. Most holes at Stonehedge are like that. They’re short — only three holes run longer than 300 yards — yet tricky.

Enter Barbara Smith. She is not a beginner, nor is she an expert. As one of 21 members at the course, she’s played the 5th hole countless times. By her estimate she plays the course at least four times a week, now that she and her husband are retired. Every time she plays that short yet tricky 5th hole, she’s playing an endearing, beginner’s style of golf.

If Smith pars the 5th, she’s happy, maybe even thrilled. If she pars any holes at Stonehedge, she’s walking away with a smile. That’s because she doesn’t keep score. Bogeys, double bogeys, triple bogeys — they’re not in her lexicon. Nope. Why bother with the tally, she thinks. Smith only counts her pars (and the occasional birdie). The same goes for her playing partners. If she makes zero pars on Tuesday, so what? Maybe she’ll make three on Thursday. She is the type of golfer made for Stonehedge.

“I’m not someone who hits it long, so it’s a fun course to play,” Smith said. “You can still make some good shots. A couple of them you can hit it from tee to green. You’ve got a chance at, at least par, maybe. We see families out there. Sometimes groups where it’s the grandparents, the father and the children all playing together. It’s nice to see the younger generation is starting to learn the game.” 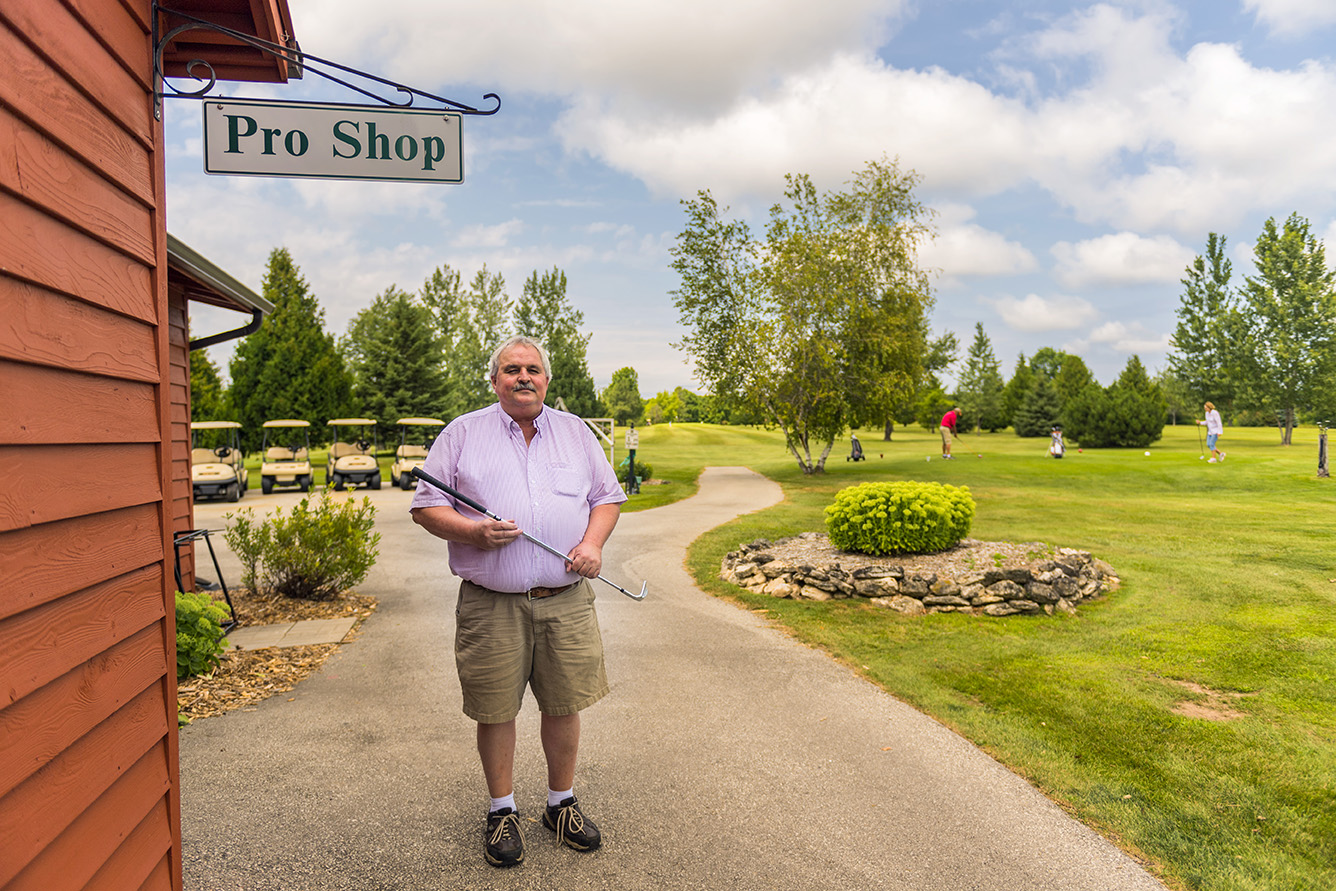 This younger generation she speaks of is something Stonehedge embraces. Every summer, Peninsula State Park offers two four-day sessions of junior golf school. On the first three days, the juniors receive lessons and an introduction to the game. On the fourth day, the class journeys over to Stonehedge to play the course as a quasi-capstone project. Throughout the rest of summer, those kids can play for free at both Stonehedge and Peninsula State Park’s short course.

Oswald calls it a “wonderful arrangement.” Back to Barbara Smith, though.

From Peninsula State Park to Stonehedge is, quite ironically, the same pilgrimage her father and uncle once made. Peninsula State Park, with all its breathtaking views overlooking Eagle Harbor, is around 6,000 yards. By comparison, it’s long, hilly and not made for the aging senior player. Smith’s father and uncle, as their time as golfers tapered off, decided Stonehedge was a better fit for their games and their health. That’s when Smith was first introduced to the course. She hasn’t found another one that works better for her. Now 13 years after playing it for the first time, she’ll soon make that same introduction to her grandchildren.

“You know…” Smith said to herself, reciting a thought she’s certainly had before. “The one that is turning four, well, he’s almost five. We could probably take him out there and see what he could do.

Next year? She could bring her grandson out to Stonehedge next week and it would be quite alright.