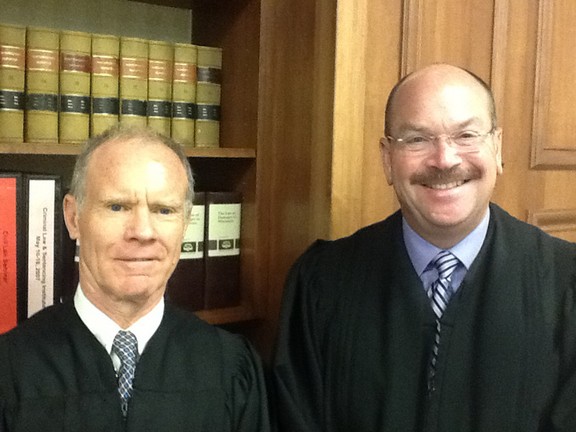 Door County Circuit Court Judges Peter Diltz (left) and Todd Ehlers say they recognize that theirs is not a job one takes to make friends.

When you’re a judge in a small town, you’re never far from the consequences created by the crimes of the people that stand before you awaiting judgment.

I had called for a comment about Door County’s new alternative sentencing program for repeat drunk driving offenders that provides judges with more leverage to use in sentencing repeat offenders. The county recently received a grant that could provide up to $50,000 to contract with a case manager to run the program, which would trade jail days for agreement to enroll in an enhanced treatment and supervision program.

For a judge seeing the same faces again and again, it can be frustrating to simply wield more jail time with each offense.

“Do I feel like I’m spinning my wheels sometimes just sending them back to jail?” he asked. “Yeah, a little bit.”

Diltz’s story was of a woman he recently sentenced to 140 days in jail for her third OWI conviction. He knows the woman, a server who has waited on him at area restaurants.

“She’s a single mother,” he explained. “I don’t believe she’s a regular drinker, but like so many, she made a really bad decision when she did drink.”

Now she was not only prepping to spend 140 days in jail, but to arrange childcare for her 10-year-old. She was struggling to figure out whether to use the Huber privileges offered in her sentencing to work and pay her bills or to spend time with and take care of her daughter.

Hers is a cautionary tale, the kind that – hopefully – dissuades others from making the same mistake. But in such instances, Diltz isn’t sure that another trip to jail is the key to preventing another visit to his courtroom.

For years judges have had the same ammunition to use to fight drunk driving – jail, fines, license restrictions and, more recently, ignition interlocks – but it’s clear that the one-size-fits-all approach to sentencing doesn’t work for everybody.

That’s why the work of Joe Krebsbach and Tina Baeten at the Door County Department of Community Programs is encouraging. They pursued a grant to fund a case manager for the alternative sentencing program when it was clear the county was not going to find room in its operating budget for it, though it had the support of the district attorney, both Door County Circuit Court Judges, and a group of community advocates.

“Just locking them up isn’t working,” said Pastor Michael Brecke. “We spend about $60,000 to incarcerate someone for one year. If we put all of that, or even some of that, into treatment we could really make a difference.”

[Estimates of the cost of incarceration differ widely. The Legislative Analysts Office puts the number at $47,102 per year, while a Pew Research study put the cost at $29,000. Other estimates go as low as $19,000. The Wisconsin Policy Research Institute estimates that incarcerating inmates in Wisconsin costs $30,700 per year.]

Diltz said jail does serve a purpose, punishing the offender for the crime and sending a deterring message to others, but it often doesn’t change a person’s behavior, which doesn’t make the public any safer.

That’s why Diltz supports opening up more treatment options. Like jail, treatment won’t work for everybody, but it’s worth a shot. To absolutists it may come off as being soft on crime, just as Diltz’s message to drunk drivers might not sound hard-line enough, but it’s grounded in reality.

“You’re probably going to drink again,” he concedes to some repeat offenders in his court, “but when you do, just don’t get behind the wheel of a car! Just don’t do it.”

It’s his effort to re-frame the problem and recognize the limit of the court’s ability to cure disease.

“We’ve traditionally emphasized the drinking aspect of the problem,” he says. “But drunk driving has two components – the alcoholism and the driving. Now alcoholism is a disease…It’s hard to fix addictive behavior. But we can address the driving. Nobody is addicted to driving a car.”

When Green Bay police were struggling to clean up the Broadway neighborhood, they grew similarly frustrated with the revolving door.

There, police distribute a list with the names of people who have been repeatedly involved in incidents in which alcohol was a factor. Police request that establishments not serve or sell to the people on the list (read more in “A New Approach to Drinking Problems.”)

As a former bartender, I’m still surprised that the Door County Sheriff’s Department doesn’t launch a similar program to encourage bartenders to not serve repeat drunk drivers or, at least, to get their keys when they grab a stool.

That could go a long way toward keeping them out from in front of Diltz’s bench. Like the woman whose story Diltz told.

“If she just had the mindset that, ‘OK, I may have a couple drinks, but I’m just not going to drive,’ then she wouldn’t be in this position,” he said. “It’s so easy to slip on the drinking part, but it’s easy to not drive.”

The alternative sentencing program is an encouraging first step, but it’s just one of many we can take if we search for more than a single solution.