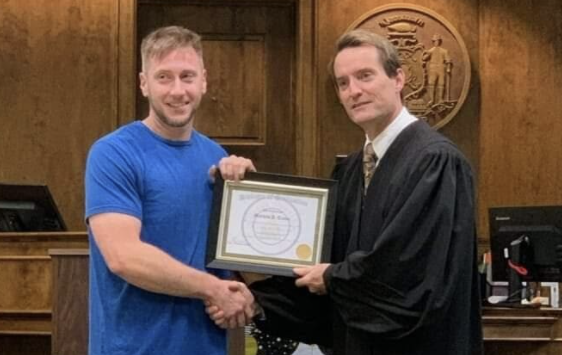 Matthew Traver wasn’t looking to get sober, he just didn’t want to go to prison.

Police officers had found him huddled with prescription pills, heroin and needles in a storage unit in the basement of a Green Bay apartment building. It was only the latest in a long history of arrests for what Traver called “ticky-tack things.”

“They wanted to send me to prison for four years,” Traver said, recalling the conversation he’d had with his lawyer. “I told him there’s got to be another way.”

These courts are aimed at felony offenders who commit crimes largely as a result of, or related to, their addiction. Participants who opt for treatment court are convicted, but they avoid long jail or prison sentences in exchange for committing to a rigorous supervision and treatment program.

This program includes regular drug testing, participation in a drug or alcohol rehabilitation program, and weekly court appearances with the judge, district attorney, counselors and other court officials. Eventually, participants are required to get a full-time job and an apartment.

“The idea is that after 12 or 18 months, they’ve developed the tools for sober living,” said Door County Circuit Court Judge David Weber, who has led the effort to get Door County’s treatment court off the ground.

On Saturday, Oct. 30, Traver will share his story during a presentation at Egg Harbor’s Kress Pavilion about the Door County Treatment Court. As part of the Eileen Bohn Speaker Series, presented by the Door County League of Women Voters, the event will feature a panel including Judge Weber; Colleen Nordin, Door County district attorney; and Joe Krebsbach, director of the Door County Department of Health and Human Services. The panel will focus on the nature and purposes of treatment courts, the reasons why a treatment court was established in Door County, and its progress.

Traver is one of two treatment court graduates who will discuss their experiences in treatment courts in northeast Wisconsin. Serah Muinde will also speak about her experience in the Winnebago County Treatment Court.

Traver was 38 when he first entered Brown County’s treatment court and had been an addict since he was 14. He heard only one thing when his lawyer described the treatment court option.

“They will let me out,” he said. “I thought, ‘Great, I’ll start getting high again.’ I couldn’t imagine not getting high for four years.”

“It’s a level of supervision that they’ve never had, that they don’t get on probation,” Nordin said. “In probation, they meet only periodically. But [treatment court is] not just supervision, it’s support: help with housing, treatment, job hunting.”

Traver was eventually accepted into the program, but he did his best to blow his opportunity, immediately skipping court and appointments and using again.

He made several more mistakes, and by his own account, he should have been kicked out of the court and sent to prison. Instead, he was sent to jail for a week, where he ran into a friend he used to get high with.

“He was in for 20 years,” Traver recalled. “He told me he was gonna die in there. Then he looked me straight in the eye and told me, ‘This life isn’t for you.’”

That night, Traver’s friend went into his cell and hanged himself.

“The next day I’m thinking of him swinging in his cell, looking at this [crappy] tray of food,” he said. “And I thought, ‘My story’s just not going to end like this.’”

Traver moved into a sober-living facility and began clawing his way back into becoming a functioning member of society with the support of the treatment court program. He said treatment court is a much different experience than the punishment-focused approach he had encountered previously.

“Before that, I always had a negative outlook when I went to court,” he said. “The outcome is always going to be negative. Your life is going to be altered in a negative way. But in treatment court, they would acknowledge the growth. You usually feel like you’re being victimized by the court system. In treatment court, they give you the pat on the back, but then they make you think about the next thing. It became a mindset for me: ‘What’s the next positive thing for Matt?’”

Traver has been sober for three years and 10 months, and he’s in the process of establishing a nonprofit to create more sober-living houses for people in his shoes. It’s a far cry from the corner of an apartment storage unit.