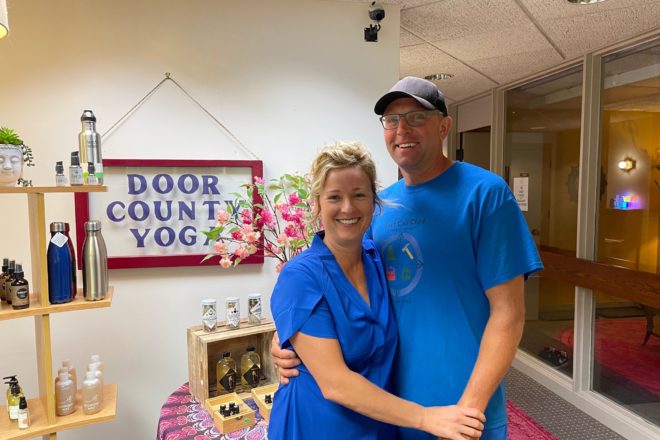 Chad Ladick went home one day in June last year and told his wife, Jan, that they should buy the former Nicolet National Bank building in Sturgeon Bay.

The vacant, 36,000-square-foot building at 217 N. 4th Ave. had been for sale for more than two years after Nicolet moved across the street into a new building.

The couple had gotten married the year before. They had a new baby on the way, and the pandemic was still raging. They had recently finished a project in Egg Harbor at 7818 Hwy 42, across from Greens N Grains, buying and completely gutting the cabin-style building. Jan opened another Door County Massage location on the first floor, and the second floor became a short-term-rental unit.

“But during COVID, we had time,” said Chad, who owns his own property-management business.

“Chad has a background in construction, so it doesn’t seem like such a big deal in his mind, when I’m like, ‘Oh, my God,’” Jan said.

“That’s almost exactly the way she looks at it,” Chad said, smiling.

After a couple of days, reservations aside, Jan agreed with the bank-building purchase, and the couple jumped in with both feet.

“We took it all on – everything at once,” Jan said.

The Ladicks knew about the concept of coworking space that’s popular in more urbanized areas and thought it would work in Sturgeon Bay. But they were uncertain about local demand for different types of businesses in a multifaceted space. Today, Chad admits he wasn’t sure it would work.

“This was an adventure for us,” he said. “I was very nervous.”

“The people who called immediately are the ones who live in the Wi-Fi dead zones, like Bay Shore Drive and south of the city where you just can’t work at home,” Jan said.

The calls kept coming. One year later, the Door County Epicenter of Commerce and Community – Epicenter for short – is almost completely full of tenants, with only one office space available as of two weeks ago.

The directory in the lobby has a list of 22 tenants among the three floors (basement, main and second floors), and the mix is eclectic: retail stores, custom framing, professional services (a clinical psychologist, paralegal services and tax professionals, for example) and personal-care services, including a professional psychic and spirit medium.

The roomy spaces in the basement have been turned into a kind of sanctuary where Jan’s yoga and massage businesses are located. There, soft music, soft lighting and lush interior design invite light footsteps and whispering.

Even the former bank vault in the basement is now claimed by one of the new tenants, Inspired Employment, a company formed in March of this year that provides services for people with disabilities. The new company leases a couple of the office spaces on the second floor, and it will soon renovate the basement vault space for classes and activities.

The original drive-through coffee-shop tenant didn’t work out, but another has rented the space – “That’s our last missing piece: the coffee shop,” Jan said – and Door County Land Trust recently anchored the building by remodeling half the space on the second floor and signing a long-term lease.

Most of the leases are month to month, however, with no complications and little turnover.

“As soon as one goes out, one comes in,” Chad said.

One monthly rent payment covers all utilities, including the building’s strong broadband connection. People can tap into that Wi-Fi service by renting a cubby by the hour or day. The Ladicks also keep one office available for daily rentals.

During the summer, Chad said they had two to five people per day renting those short-term spaces.

“They’re on vacation from Chicago; they need an actual office to go into so they can do a Zoom call or conference call; and they just need privacy and quiet,” Chad said.

The Epicenter spaces went so fast that six months after they purchased the Nicolet National Bank building, the Ladicks bought another former bank building in Sturgeon Bay – this one at the corner of 3rd Avenue and Michigan Street. That building was filled instantly with six different businesses, with Dave’s Upholstery on the first floor.

“It was going so well here and so fast that we bought it for overflow,” Chad said. “That one they ate up quickly because of the windows.”

“It’s almost like we’re ready for another office building,” Jan said. “Where do we send them now?”

The fate of this building – now full of life and commerce – could have been very different. Chad said when they were negotiating the purchase in June 2021, they won a bidding war with another prospective buyer who had intended to turn the property into a parking lot.

“Just think,” Chad said. “They were going to bulldoze this.”

To learn more about the Epicenter, go to doorcountyepicenter.com or call Chad Ladick at 920.626.1056.