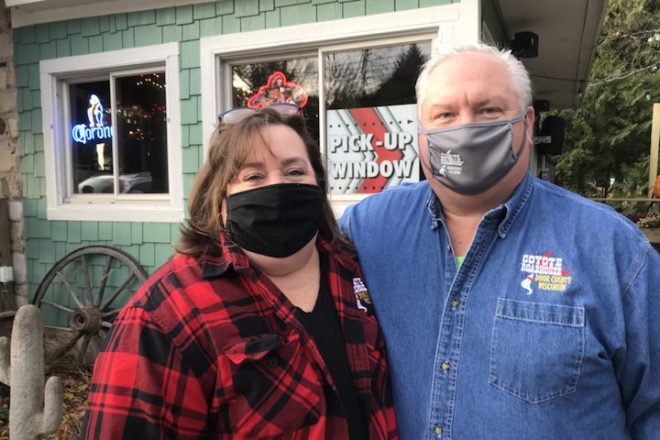 In January 2000, Carol and Warren Groth and Howard and Darlene Bailey – friends and partners in DC Ventures – bought the Coyote Roadhouse at the west end of the Kangaroo Lake causeway. Before they bought the business, they’d all been visitors to Door County.

The four of them ran the restaurant until 2009, when Warren and the Baileys had died. Unable to continue alone, Carol asked her daughter and son-in-law, Carrie and Scott Graybill, whether they’d be interested in becoming the managers. Carrie was in the travel business in Chicago, and Scott was with the Chicago Board of Trade, but both had worked in restaurants when they were younger. “The decision to move to Door County wasn’t difficult,” Carrie said.

Over the past 21 years, the Coyote has become the sort of  everybody-knows-your-name gathering place that’s popular with both locals and tourists. It’s cozy and friendly, with a big deck overlooking the lawn sloping down to the lake. Carefully spaced indoor and outdoor seating has been available throughout the pandemic, and – a big plus in Door County – it opens at 11 every day except Thanksgiving, Christmas Eve and Christmas Day.

“Carrie was determined to carry on as her father would have liked,” Scott said. “We’re a destination that a lot of people return to, and they want it to be just like they remembered it.”

It’s certainly true of the menu that has been developed during the past 21 years. “It would be hard to eliminate anything,” Scott said, “because we’d be getting rid of somebody’s favorite.” Carrie noted that things they’ve added to Warren’s Meatloaf Mondays – Turkey Pot Pie Tuesdays and all-you-can-eat Walleye Wednesdays – easily hold their own against everyday best sellers such as barbecued ribs, shrimp, the “Kanga” Reuben sandwich, “Garbage” salad, French-fried onion loaf and quesadillas.

Although things have moved along happily unchanging for more than two decades, that certainly was not the case in the past. The title for the land the restaurant stands on, as well as other lots between the lake and Maple Road, has more than 140 entries from 1852 to 1992.

The 20th century’s first entry was in 1904, when Albert and Franz Gerdman, who owned much property in the area – including the island in the lake and what was to become Eggers Point – purchased some of the land between the lake and Maple Road. From then until 1946, that property went through multiple hands, with many lawsuits and at least one foreclosure.

In 1926, the Gerdmans sold Lots 3 and 4, on which the Coyote is located, to John and Anna Henkel. According to the original records, the Henkels lost the property through foreclosure in 1936. It was then purchased by Edward Denis, executor of the estate of Gregoire Denis, and placed in the Denis Family Trust. In 1946, trustees of the trust sold the entire property to Alfred and Wanda Krueger, who established Krueger’s on Kangaroo.

In 1962, Kruegers sold the property – including the restaurant and the nine cottages they had built or remodeled from old farm buildings – to Harry and Blodwyn Michelsen for $72,000. Blodwyn died in 1972. Sometime after 1978, Harry and his second wife, Delores, sold three parcels of their land. Paul “Pablo” and Jean Fritschka bought the property where the Coyote is now located and renamed it Pablo’s on the Ocean. During the four years they owned it, they turned five of the cabins into a condo association called Wallaby Lodge.

In 1982, Glen and Virginia Anderson purchased the restaurant. Their son, Dave, was the bartender and called the place Dave’s Knot Inn. A decade later, Ron and Kim Tanck leased it from the Andersons and ran it for two years. In 1994, the Andersons sold the restaurant, but not the cabins that weren’t part of the condo association, to Rick and Jane Doetsch, who originated the name Coyote Roadhouse. The Groths and Baileys bought it in 2000.

When Harry and Delores Michelsen and her five children owned Michelsen’s on Kangaroo, they had four bedrooms upstairs, but the rest of their living space was on the main floor. Bill Tressler, who owns the Whistling Swan in Fish Creek and Hinterland Brewery in Green Bay, spent time years ago on Kangaroo Lake, where his parents had cottages. He remembers visiting Michelsen’s and having to walk through their living room to get to the men’s room.

Among the many changes that have taken place during the past 117 years, changing the location of the bathrooms was one of the best.