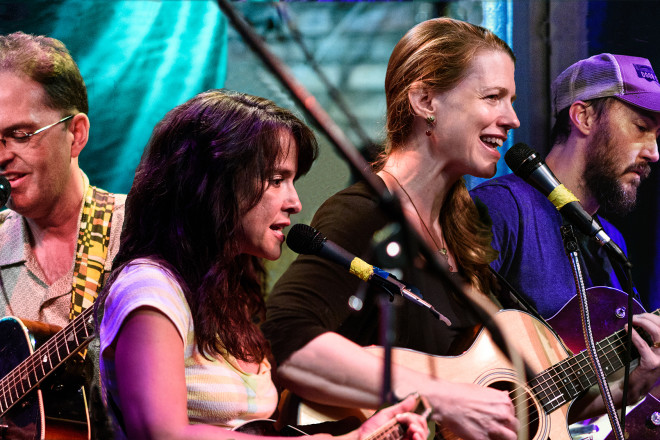 Just a few weeks after wrapping up another successful Love On Holiday appearance, Chicago musicians Jennifer and Robin Bienemann will be back in Door County with their friends, Jodi and David Walker, to perform their unique jazz, folk and rock fusion as The Significant Others.

Born out of a mutual love for open mic night at FitzGerald’s Nightclub in Berwyn, Illinois five years ago, The Significant Others is a unique combination of four distinct voices and styles. With each of the members having built a solid solo reputation, The Significant Others’ performances are a showcase of the individual musicians’ talents – Dave the trained jazz musician on guitar, Jodi with the strong rock ‘n roll vocals, Robin (of punk/rockabilly duo Twang Bang fame) on the guitar, and the folksy, honey sweet vocals of Jenny – along with the magic that happens when those influences collide.

“When we’re all four collaborating, it’s a great blend of folk, rock and jazz with some great guitar work by the two gentlemen and Jodi and I singing in close harmony,” Jenny said.

All four of the musicians take their turns penning songs, with the results running the gamut from Jenny’s meditative reflections on life (“You Never Know How Lonely You Are Until You’re Not”) to Jodi’s quirky story on a time she was stranded at a gymnastics meet out in the snow (“Grumpy”) to the classic Robin Bienemann tune, “Vampires Are Not Zombies,” which “just helps you know the difference between vampires and zombies,” Jenny said.

“We just love playing and singing together and finding a place,” she said. “This is not music that’s necessarily supported by Top 40 radio stations. It’s a kind of music that finds its audience organically and that suits us. That’s the kind of people we are anyway, kind of grassroots, pull yourself up by your bootstraps, play something new.”

Lost Moth Gallery owner and Small Forest musician Jeanne Kuhns has been a fan of The Significant Others since the beginning. Both Jenny and Robin were on the bill of Kuhns’ first concert series at Town Hall Bakery more than a decade ago and are regular participants of the Woodwalk Gallery concert series and Holiday Music Motel’s weeklong songwriting events Love on Holiday and Steelbridge Songfest. Robin’s turn of phrase can be found on the popular Steelbridge songs, “The Space Between,” “Love with You,” and “Battle of the Bridges.”

“When you put the four of them together, they have all learned to support each other’s styles and they’re fun,” Kuhns said. “They’re delightful and open and friendly and funny. Robin sneaks in these songs, most of his songs have social commentary in them either the way he witnesses small scenes of human behavior in the room around him or social things that he sees that upset him or little things, like the life of a guy who goes around tasting wine all his life and gets too old and can’t taste so well anymore so he his job isn’t going so well at that point (“Sommelier”), but because he’s got this brilliant mind for words, he makes these songs hysterical and at the same time, they’re so brilliant and so poignant that you don’t even know how to feel. You just sit there with all of your senses being used up at once.”

Combined, the four members of The Significant Others have released a dozen solo albums and been featured on many others. Saturday’s performance is a celebration of the two most recently released albums: Jodi Walker’s Petulance and Robin Bienemann’s Songs About Lessons Learnt. Admission to the concert includes one of each album.

The Significant Others will bookend the show with a full-band performance, filling in the middle with a spotlight on each individual artist.

“Since every one of them is a singer-songwriter, in their sets they each incorporate a little set of each person’s songs and so for that moment, each person is kind of the lead on that song,” Kuhns said. “So it’s really a cool combination of different song style types that are melded together with their brilliance at arranging music.”