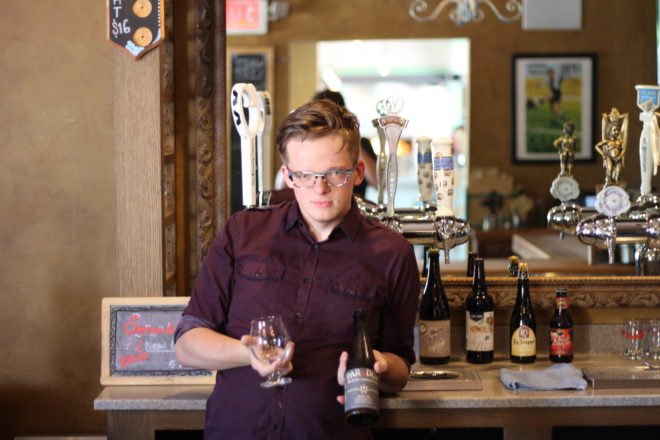 Ryan Castelz has a way of putting beer drinkers of all persuasions at ease at the bar at Bier Zot. Photo by Jess Reinke.

If you’ve ever walked through the doors of Bier Zot Beer Café, chances are you’ve been taken aback by two things: the variety of brews consuming its beer list and the color and fit of the skinny jeans on the man you’re most likely to see behind the counter.

Say hello to Ryan Castalez, Bier Zot’s head honcho of beer buying and serving. A New Berlin native, he’s been slinging beers in Door County since shortly after graduating in 2015 from Iowa’s Luther College with a psychology degree. The reason for relocation? A romance.

“I feel like if you ask a lot of young guys why they’re up in the county, it’s women,” Castalez said. “…I was really looking for a place that I could come and figure out my life. I didn’t know if I wanted to go to grad school, I knew I wasn’t going to get a job in psych, at that point I didn’t think I wanted to work long-term in the service industry so I came up here.”

Though the romance didn’t survive beyond his first winter here, Castalez had already been finding love in the bottles and taps of Wild Tomato in Fish Creek, where he worked as an outdoor bartender.

“We were going through all these new beers all the time, and there were people around me who were excited about it,” Castalez said. “I kind of got to learn that if I start to care about this and learn about these people and the brewers and the breweries and the beers and the flavors, it makes our interactions so much more interesting.”

Within months he became a Certified Beer Server, the first of four levels in the intensive Cicerone Certification Program, the industry standard that identifies those with significant knowledge and professional skills in beer sales and service. He had also begun waiting tables at Wild Tomato, where he learned that beer is more than just a consumable and serving is more than just handing drinks across the bar.

It was a lesson reflected in customers’ values, and how those values tied into the dollars they were spending on beer. Castalez puts it simply: if a consumer spends less than $10 on a beer, it’s generally for the flavor, aroma or familiarity with the brewer.

The bartender, then, plays an important role as storyteller. Of course, any good storyteller will commit themselves to research. Castalez has a few go-to resources: BeerAdvocate.com, John Palmer’s How to Brew, Tasting Beer by Randy Mosher, and of course, fellow beer lovers.

In early 2016, Castalez transitioned from Wild Tomato to its sister restaurant, Bier Zot, where he works as bartender and front-of-house manager. The move vaulted him into a corner of the county’s beer-drinking culture that has changed his approach to sharing beer knowledge.

“A big part of it is not putting down things that people love or like,” Castalez said. “The most polarizing thing you can do as a beer snob is to have somebody come in and say, ‘I normally drink light beer,’ and then you say, ‘Well, I have nothing for you then.’ And people do that! People will go, ‘Are you kidding? Why are you here?’ That attitude is immediately polarizing…you don’t have to say anything about light beer. You don’t have to like it. You really just have to not put yourself in a position where, because they like light beer, you are instantly above them.”

In his relatively short time in the world of beer, Castalez has found a way to help beer enthusiasts and novices alike open their palates to different varieties, and it follows his approach to beer as narrative.

Where beer is the story and the server a storyteller, Castalez’s unique wardrobe – a collection of chunky sweaters, shimmery blazers and colorful skinny jeans thrifted from Bargains Unlimited and paired with his high-end Spruce purchases – is the book cover he is fine with people judging.

“I have two things that work for me: my crazy wardrobe and my speech impediment, because both of those things open conversation so incredibly quickly,” he said. “You’re instantly bringing things into a personal realm. The way I dress or the way I talk have absolutely nothing to do with the beer you’re drinking. That’s not the point. The point is that we’re making a connection and that that connection will help us to better navigate the beer on the list.”