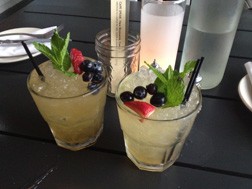 A little more than a year since it opened, the Wickman House in Ellison Bay has fulfilled its calling.

“Our whole mission behind opening this restaurant was to be a bar-centric restaurant that was focused on service-oriented, farm-to-table food,” said Mike Holmes, co-owner of the restaurant. “We almost didn’t take over the property because the Class B liquor license was gone and we wanted to be able to provide craft cocktails.”

On Friday, May 24, the restaurant got the license, allowing it to sell cocktails.

Holmes developed his passion for intricate craft cocktails while bartending in New York City, far away from Wisconsin’s beer-saturated drinking culture. He fell in love with the classic drinks and the social, American history they represent.

“They’re all classics, something I’ve created before, or my take on the classics,” Holmes said. “They’re a lot of Prohibition-era drinks. It kind of gives the restaurant a feel of the old Ellison Bay Lodge.”

There are 41 drinks on the Wickman House cocktail menu, most of which come with romantic tales about their origins.

Like the Hemingway Daiquiri, which Holmes said was apparently created by author Ernest Hemingway. Hemingway liked to drink, but preferred them without sugar, so he mixed a cocktail with lime juice, grapefruit juice, triple sec, rum and maraschino liqueur. It’s slightly sweet but not too sugary – just right for Hemingway.

Holmes had a hand in many, if not all, of the cocktails on the menu. The Douglas in particular makes him proud. He created it on a slow night behind the bar, when he had too much time and too many ingredients not to try something new. He ended up with the Douglas, made with vodka, homemade lemon-infused simple syrup, honey liqueur, honey water and passionfruit.

“It takes you all over the place, but it all ties together,” Holmes said. “It’s something I’ve never tasted before.”

It’s only been two weeks since the Wickman House was granted a Class B liquor license, and the cocktail menu is bound to change as the season continues. Holmes even hopes to create cocktails with kombucha, a fizzy fermented tea.

Mixing drinks from behind the bar of his own restaurant makes Holmes especially proud to serve them to customers.

“I really hope people will come in for that experience,” Holmes said. “The whole idea would be to get something new, that’s why I’m excited. It’s something else fun you can do to treat yourself.”