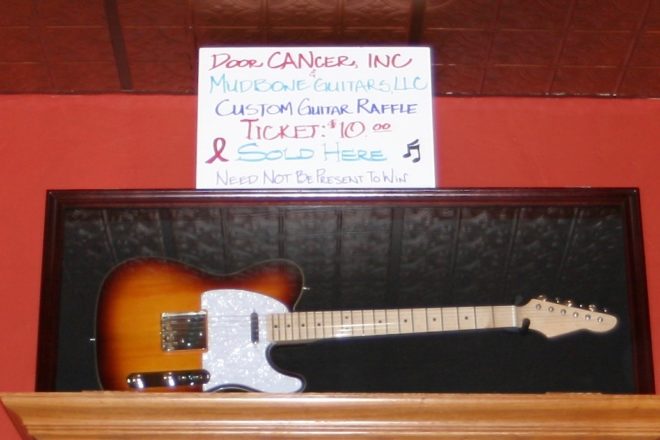 Dan “Mudbone” Thimm kicked off a summer-long raffle for a custom Mudbone guitar last Friday when he placed the instrument in a display case above the cabinets at Sturgeon Bay’s Get Real Café. Photo by Aleah Kidd.

Dan “Mudbone” Thimm kicked off a summer-long raffle for a custom Mudbone guitar last Friday when he placed the instrument in a display case above the cabinets at Sturgeon Bay’s Get Real Café. The one-of-a-kind guitar is the product of several months of work by Thimm, the owner and founder of Mudbone Guitars, and the funds it raises will go to DOOR CANcer, a local nonprofit.

Thimm has a career as a Systems Engineer, but he’s been making guitars as a hobby for the last 27 years, building them for friends, for himself and now to donate for charity fundraising. The gorgeous guitar being raffled is a replica of a Telecaster that Thimm describes as “a player and a displayer. It has Gotoh compensated saddles, Alnico 5 magnet pickups and a low and sweet action.”

With that many years of experience, Thimm is obviously no stranger to crafting – and appreciating – great instruments. “I think I have around 35 guitars,” he said. “I build them, and once they’re finished, I always play them to test them out, and sometimes I can’t get myself to give them away. I had that feeling with this one too, but I’m glad it’s going to be raising funds for charity instead.”

In May, Thimm reached the one-year anniversary of being in remission from stage IV metastatic prostate cancer. After his initial diagnosis, this positive outcome was unexpected, and he has been forever changed. “It’s made me very spiritual,” he said. “When I found out I was clean, there was a voice in me telling me that I needed to give back.”

He soon realized the best way he could contribute to the causes he cares about most is by putting his skills to use through guitar-making. Thimm reached out to Kris Husby-Nelson of DOOR CANcer to pitch his idea of donating a guitar to raffle off. The resulting campaign is called Strike a Chord for Humanity and features the traveling guitar, which will indeed travel around to county establishments all summer long to promote the raffle-ticket sales.

Raffle tickets cost $10 each. All money raised will go directly to DOOR CANcer, a nonprofit that assists Door County cancer patients with their nonmedical financial needs. “We wanted to find a way to help those affected by cancer without having to cut through all the red tape,” said Husby-Nelson. “This is an effective way to help people who really need the financial assistance now, as they are going through treatment. We help with any nonmedical bills such as utilities, food and mortgage. Patients can then focus on working with insurance and paying off the incoming medical bills.”

According to its website, “DOOR CANcer was conceived on the principle that having cancer should not ruin your life and that of your family. That’s why we help people maintain their lifestyle when they go through treatment.” The only requirements for assistance from DOOR CANcer are that the applicant is in active treatment and lives in Door County.

If you have the pleasure of meeting Thimm, you’ll witness his enthusiasm for giving back. He’s eager to share the campaign with the larger community and excited to take the traveling guitar to each new location. The guitar’s “tour” is still welcoming new locations, so business owners may still get involved.

After spending several weeks at Get Real Café, the guitar will head to the Brick Lot Pub and then farther north. You can buy raffle tickets at all of the participating stops, which will continue to be announced throughout the season. The raffle winner will be chosen randomly on the main stage at Husby’s during Sister Bay’s 2019 Fall Fest.