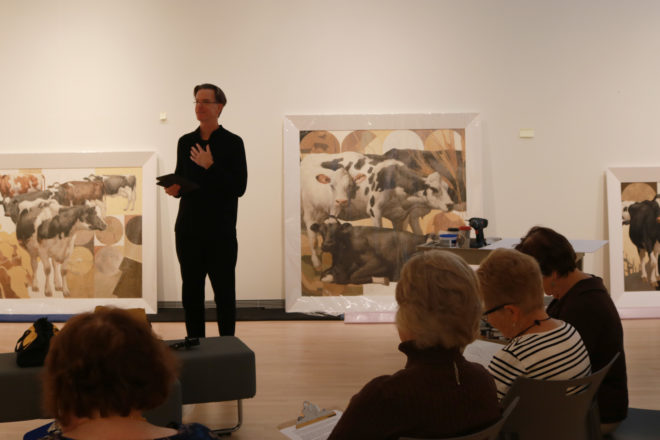 Using what he describes as “an amalgamation of signs, symbols and emblems representing agriculture,” Sister Bay artist Craig Blietz’s latest body of work has been on exhibit since October at the Museum of Wisconsin Art in West Bend. In an unusual move for the museum, they allowed Blietz to choose the color of the gallery walls to help the paintings pop. Below, Blietz talks about his work during an artist talk at the gallery. The exhibit moves to the Tory Folliard Gallery in Milwaukee on Jan. 14, where it will remain until March 2. Submitted.

A parade of cows from Sister Bay has been making an impact in West Bend.

In what is being described by the staff at the Museum of Wisconsin Art (MOWA) in West Bend as a midcareer breakout show for Sister Bay artist Craig Blietz, his latest body of work encompasses what the artist refers to as the symbols, signs and emblems of where he lives. The exhibit of 23 new works is called Craig Blietz: Herd.

“He’s been on our radar for quite a number of years. We’ve seen other bodies of work appear in other institutions,” said Graeme Reid, curator and director of collections at MOWA. “We really think Craig is hitting his stride as a painter, but we also think he is an artist who is ready to break out of Wisconsin and be nationally recognized for the work he does. Not only is he an outstanding painter, but a lot of the issues he deals with are suddenly of national relevance.”

“He’s definitely worthy of a national presence, and we feel this exhibition alone is a new direction for him,” said Jessica Wildes, MOWA’s director of communications and marketing. “It’s really strong and exciting. We feel it will definitely bode well for him, and we’re happy to present it. It’s been a wonderfully attended exhibition, and the response has been extremely positive. People have come repeatedly. It’s such a warm and welcoming exhibition. It just feels so lovely to slow down and sit in there.”

“I’m referred to as the cow guy. I embrace that,” Blietz said. “However, I also want it known that just like my predecessors throughout art history who have used cattle in their paintings, I’m using cattle to speak to something greater than the cattle itself. The title Herd also represents what I’m doing in this body of work. I’m bringing together an amalgamation of signs, symbols and emblems representing agriculture.”

Blietz said the 23 mostly large-scale works that make up the exhibit are a combination of three bodies of work from his own past.

“Those provided the groundwork or basis from which I launched into the work,” he said. “From a scene standpoint, my work, I think you could probably, if you had to classify it as something, I think my work probably falls into a landscape/still life kind of genre, if you will. What I’m doing is taking symbols, signs, emblems and using them to represent a place. That place, of course, is where I live, most directly here in Door County. Globally, on a bigger platform, you can look at it as the Midwest and throughout this country.

“What people recognize most often in my work are the cattle, but I use those and they are such a prominent feature in the paintings because they are such a clear symbol representing the place that I live. I see this animal; that animal stands for something for me. I have yet to find anything that speaks any more clearly than that.”

Herd also makes a departure for both the artist and the museum: For the first time in an exhibit of his work, Blietz included preparatory work that shows his artistic process.

“I’ve become quite comfortable with a process that works for me. I do a lot of preparatory work for the paintings,” Blietz said. “Part of that preparatory process were these small colored sketches that are displayed at MOWA along with the final paintings themselves. There are also a couple of drawings in there of mine that I will use in the process of making a painting. I use the discipline and rigor of drawing to solve problems and establish things like form, design, content. It’s very rare I exhibit those things, but in this case, Graeme and Laurie Winters [MOWA’s executive director], in their studio visits up here, suggested that those would be a really good thing to include, so we went with it.”

Curator Reid said that although normally the museum staff chooses the color of the gallery walls where the exhibit will be shown, “On this occasion, Craig actually wanted a certain color on the four main outer walls, and that is because he wanted the frames to essentially blend into the wall so when you come into the gallery, the thing that really popped was the actual painting. Everything else almost faded into the background.”

Reid described the color as milky or creamy.

“The first and last thing you see are the paintings,” he said. “You’re not distracted by frames or any other colors in the gallery.”

“The color I selected and requested for the walls, I selected as metaphor, as well as the frames,” Blietz said. “The walls are the same color as the frames in some locations in the exhibit. The color is actually a metaphor for part of what’s produced in agriculture, and that is dairy. So they’re very creamy. I went with white frames in this exhibition, which is very unusual for me. Typically I am influenced in my framing by 17th-century painting, where you have these very large, dark frames. That’s what I’m most known to display my work in, but in this case I liked the metaphor of the white frame, that creamy color, for something that represents and speaks to the dairy industry. That’s why I made that request, as a metaphorical effort on my part.”

Blietz hopes people find some of their own history in the exhibit.

“The objective that I have for the work is for people to look at it and to recall their own memories of living in a place like this,” he said. “Agriculture touches every part of the world, so we all have some kind of contact with it at some point, even if it’s just going to a grocery store. My objective is for people to look at the paintings and recall their own histories and experiences with this kind of thing. I have to say I feel so fortunate at an opening reception to be there when other people are there, and have them come up to me and tell me their stories of growing up on a farm or being involved in the cattle industry somehow. To me, that’s what I’m looking to do, to bring up those personal histories.”

In addition to the opening party on Oct. 13, Blietz talked about his work at the gallery on Nov. 3, hung out to talk with gallery-goers on Dec. 1 and held a master class on Dec. 8.

“We always try to provide opportunities for the public to meet the artist,” Reid said, who added that Blietz’s lecture was one of the best he’s heard in a long time.

Asked to explain what struck him about the lecture, Reid said, “Craig is very thoughtful. It was incredibly heartfelt, and he really believes in what he is painting. He really cares about the farms and cows and the experience of the farmer. He’s very generous with his thought process.”

“The museum does just a spectacular job of doing and arranging all of these things: the artist talk and opening reception and master class. They really do a wonderful job,” Blietz said, adding that he especially enjoyed the master class, which started out in the museum’s studio in the morning, and then the group went to a dairy farm for some live cow studies.

“I haven’t taught in probably seven or eight years. I had to stop. You have to learn to say no,” Blietz said. “Unfortunately, one of the things I really enjoy doing is teaching. I think it’s a tremendous environment to be in. Everybody wants to get better and learn. There’s a fabulous energy. I really enjoy it, but because of other commitments, I’m not able to do as much as I have in the past.”

Herd can be seen at MOWA through Jan 13.

“On the 14th, it will get packed up and go to the Tory Folliard Gallery in Milwaukee and will be there from the 18th of January through the 2nd of March.”