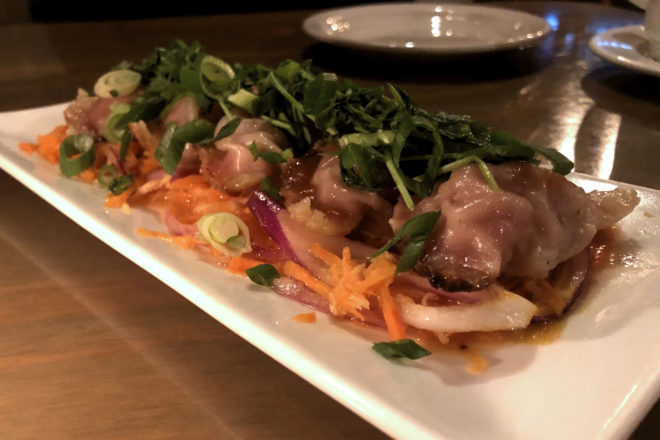 In the heart of Sturgeon Bay, on 3rd Avenue, you’ll find Crate: the area’s best sushi restaurant. The American-Asian restaurant opened five years ago this month, filling the vacant niche of a sushi-oriented establishment. And during the years since opening, it has become well known for its wide variety of sushi options, excellent fresh seafood, steak and starters – and of course several sake options to sip.

Crate is currently the only sushi restaurant in the county, so although this means the competition is not stiff, the Crate staff’s high standards have built a loyal base of diners and a sushi menu that arguably rivals many top sushi spots in larger metropolitan areas. Open year-round, seven days a week, it’s frequently filled with hungry diners spanning all ages and demographics who appreciate the local option for fresh sushi and seafood.

Crate is notable not only for its menu, but also for its distinctive, contemporary atmosphere.

“The vision for me from the beginning was to have a little more of an urban feel,” said Kelly Hartzell, Crate’s manager. “The space had been really light colored when we got in there, so we went with dark ceilings, dark walls, to give a more sexy and urban feel, with louder music and more of an upbeat vibe.” The result is a space that would work well for a casual girls’ night out, a romantic date or catching up with family over a meal.

The up-tempo music greets you when you enter the space; then you may choose to sit at the bar, at small tables or in intimate corners and booths. The creative décor stands out because actual wooden crates help to separate the areas of the large space and to add visual interest from the floor to the tall ceilings. Large pieces of art and backlit metal sculptures – fill the walls and add to the industrial feel while maintaining with the nautical theme of the city. All in all, it’s a modern atmosphere that’s more common in larger cities, and it helps to attract diners who may be used to urban settings.

“I spent some time in restaurants in Seattle, Minneapolis and Milwaukee, and then ended up coming back to Door County,” Hartzell said, “and I know that I needed [this style of dining] in my life. I wanted a place to go, even if I was doing all the work!”

“I agree,” head chef Curtis Massad said. “The scene we’ve created at Crate is very appealing. It’s the restaurant I would like to eat at when I’m not working.”

Massad joined the Crate team in the spring of 2019, and he’s been pushing to make the menu the best it can be while also keeping things new and inventive.

“My style, personally, for cooking is classical but avant garde: I like to marry the old and the new. Whatever Sturgeon Bay people like to eat, I like to bring a fresh idea to that.”

As the head chef and food buyer, Massad focuses first on getting the best ingredients that he can. He works with two seafood distributors who are able to source fish from all over the world and send fresh fish from the Pacific Ocean overnight.

“For example, we recently had bluefin toro, a species of tuna. Toro is a cut from the belly with high marbling. In Japanese, “toro” means “to melt.” I call it the “wagyu of tuna,” and people love it. Tuna is the most successful fish on the menu – definitely.”

The current menu features several new items that align with cravings during the colder times of the year, including a rich curry bowl called Buddha’s Curry. It features a “symphony” of 10 vegetables over wild rice with yellow curry sauce and crispy tofu. Served in a large bowl, the dish was indulgently rich, with plenty of thick, creamy curry sauce to coat the veggies and mix into the rice.

A new appetizer, the gyoza, was another item I tried. Gyoza traditionally refers to wontons stuffed with pork and cabbage. These do indeed have pork and cabbage, but they were also arranged on a colorful bed of Asian salad and drizzled with a sweet plum sauce. The flavors ranged from savory to spicy to sweet, making for an appetite-tantalizing starter.

And although it wasn’t new, I also started my meal with an order of the bacon-Parmesan edamame, which is served hot. The edamame – which you must strip from the outer shell to eat – and its creamy sauce are totally addicting. It’s definitely a rich flavor, but edamame is a healthful snack that you have to work to eat, so it’s a nice balance of savory indulgence that you won’t feel too guilty about polishing off.

Crate plans to continue updating its menu frequently with new entrées and seasonal items, both from the land and the sea, as in-season ingredients rotate.

“I’m always looking for brand-new, fresh ideas,” Massad said. “A menu can grow stagnant quickly, and before you know it, you’re stuck in your ways and you just coast instead of being creative and inventive.”

Although not required, diners can make reservations online through Open Table or by calling the restaurant at 920.818.1333. Crate is open for dinner Sunday through Thursday, 5-9 pm; and Friday and Saturday, 4:30-9:30 pm.

Some quotes have been edited for length and clarity. You can listen to the full interview with Crate’s Kelly Hartzel and Curtis Massad at doorcountypulse.com/podcast-sushi-with-curtis-massad-and-kelly-hartzell-of-crate.