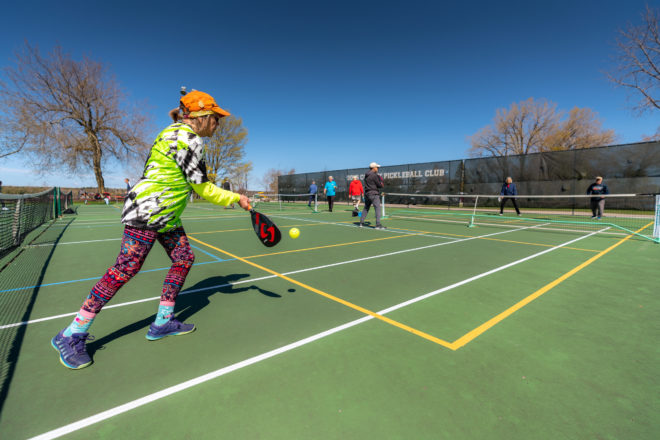 Competition at the courts at Sunset Park in Sturgeon Bay. Photo by Brett Kosmider.

“I just couldn’t get over the name pickleball,” said Jay Renstrom of his first impression of the sport. “Why in the heck was it called pickleball? Who’s going to play that?”

Renstrom and a rapidly growing number of people in Door County and throughout the U.S., that’s who. According to the Sports and Fitness Industry Association, pickleball is one of the fastest-growing sports in America, with more than 3.3 million players nationwide.

Pickleball has become increasingly popular among county residents, including Renstrom, a Sturgeon Bay resident who quickly moved beyond his hang-up with the name and became one of the sport’s ardent supporters on the local level.

Renstrom said when he started the Door County Pickleball Club three years ago, there were only two public courts at Otumba Park in Sturgeon Bay. Now there are 12 public courts in various towns throughout the county. Of the more than 150 people on the club’s distribution list, a majority reside in Door County.

“It sounds like a trivial thing, but once you start playing it, you get past the name really quick,” Renstrom said. “When you are coming into it and know nothing about it — and all you hear is the name — it doesn’t indicate anything whatsoever as to what it’s about. Once you start playing and you catch on, it becomes addictive because it’s laughter, fun and social.”

Three dads on Bainbridge Island outside of Seattle dreamed up pickleball in 1965 to overcome their children’s summertime boredom. According to one of the founders, Barney McCallum, he named the game after his dog, Pickles, who would chase the ball and run off with it.

A pickleball court resembles a tennis court, but it’s smaller: 44 feet long and 20 feet wide. The net is 36 inches high on each side and 34 inches at the center of the court. Pickleballers play with a wiffle ball and a paddle made of wood, composite or graphite.

Points can be scored only when holding the serve. Like tennis, it can be played as a singles or doubles match, and as with tennis doubles, the strategy is for pickleball partners to move in unison and get to the net area — also known as the “kitchen” — as quickly as possible. Balls in the kitchen may not be played out of the air, and the kitchen is where the majority of the points are scored.

“The kitchen line is where the party starts,” Ephraim resident Stephan Reynolds said. “Sometimes it gets going, and you’re banging it back and forth. “There is definitely an adrenaline rush. I rather enjoy that because that’s what you play for.”

Count Reynolds as another fan whose first impression of pickleball was less than favorable. But, like Renstrom, it didn’t take long for him to move past his initial notions, get hooked and become an ambassador for the sport.

“I used to pooh-pooh and just assumed it was played by people who tended to skew quite a bit older, and was played in retirement communities down south,” Reynolds said. “Once I started playing, I realized that wasn’t the case at all.”

“I thought, Sister Bay has that beautiful sports center, and pickleball should be part of it,” Daubner said. “I thought Louise would be the best person to get the ball rolling, and she sure did. There is nobody like Louise. If you want something done, it gets done.”

Soon Sister Bay had marked two pickleball courts on the existing tennis courts, where players share time with the local tennis players. The SBAA purchased portable nets that could be stored in units near the courts.

Renstrom acknowledged the efforts to provide courts to keep up with the demand of local pickleballers and predicted that the sport’s popularity will continue to grow throughout the United States.

“You’re going to be hard pressed to find communities without pickleball,” Renstrom said.