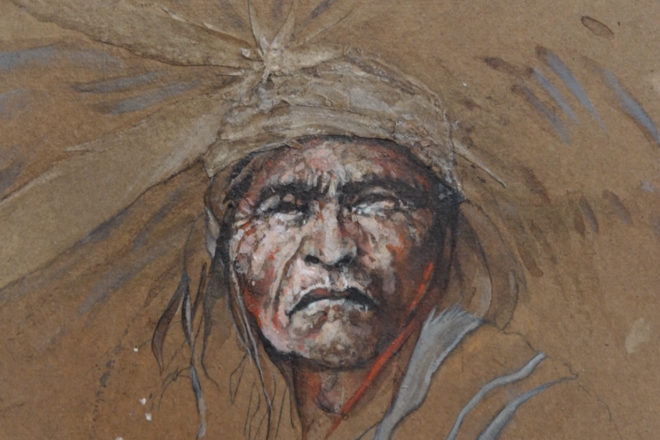 The exhibit of Tom Seagard’s Native American portraits that’s currently on display at the Door County Community Foundation, 222 N. 3rd Ave. in Sturgeon Bay, comes out of a decades-long spiritual journey. The show, titled Aho Mitakuye Oyasin – which means “We are all related” in Lakota – has special meaning for Seagard, but not in the way one might immediately expect.

“Going back to the ’60s, it was a time with a big amount of social change,” he said.

A friend showed him a book of old photographs by Edward S. Curtis, a photographer who traveled across the continent between 1900 and 1930, photographing more than 70 Native American tribes.

“I started looking at [the photos], and I could see the character, and I could see the strength, but I didn’t know what it was,” Seagard said. “I didn’t understand the culture, but it spoke to me.”
From there, he made that culture that resonated with him the subject of his painting. He pointed to one painting he created back in 1967.

“My friends who were Native American – although I didn’t know it at the time – were really intrigued,” Seagard recalled. “They wanted to know why I was doing this. I said it was because the people speak to me, and the face is telling me things.”

His friends introduced him to elders at a tribal center in Milwaukee, which led to forging a relationship with the culture that is now inseparable from his work.

All but two of the paintings in this exhibit were created specifically for the show. To create them, Seagard said he followed the Red Road, a spiritual path he has been taught.

“The spirits that I needed came to me and helped me walk through this [process],” said Seagard, who turns 75 this year. “I painted at night; I painted in the afternoon; I painted whenever I could fit it in. Some nights, I painted all night. I haven’t done that since I fell and broke my neck in 2000, and it’s nice to know that I still can.”

He speaks of his responsibility to the culture and what that demands of his work.

“It has to be truthful; it has to be accurate; it has to be honest,” Seagard said. “It is important to me to know that I did it the exact right way. There’s no room for wiggle. I painted one painting that didn’t make that muster, and I destroyed it.”

Seagard has been in the Sister Bay home and gallery that he shares with his artist wife, Brigitte Kozma, for 51 years. He paints mostly on brown paper grocery bags, mounted on Masonite and sealed with spray varnish. He works in mixed media, drawing with the soft lead found in corporate promotional pencils, then filling in with paint.

Although Native American culture has been his area of focus for decades, that doesn’t mean it’s his only interest. Following this show, Seagard is taking a bit of a break and looking for some new subjects – perhaps old cars or steam locomotives.

“I don’t want to lose the momentum now that I’m sharp,” he said. “I can’t afford rust. I don’t have any rust on me right now, and I want to keep moving. I’m going to keep doing.”