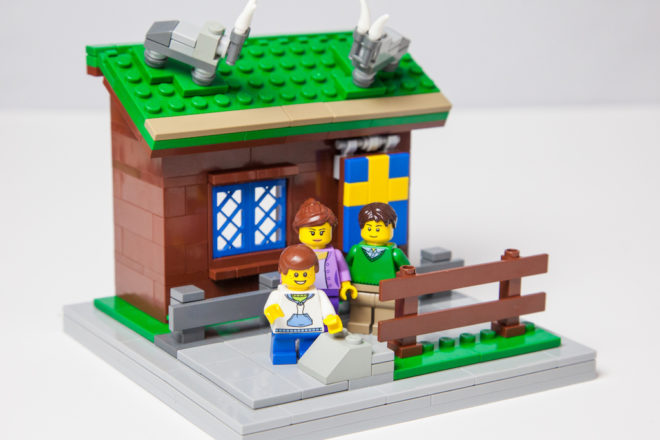 When Kris Nelson bought his son Christian a ten dollar LEGO set at Target, he felt a rush of nostalgia.

“It brought me back to when I was a kid,” said Nelson, now a software engineer who remembers the space shuttle LEGO set he built some 20 years ago and proudly displayed on a shelf in his childhood bedroom. While he explored his interest in space through LEGO, his younger brother gravitated toward the pirate and castle sets.

When Christian opened his new set, Nelson naturally fell in love with LEGO, toy bricks with limitless possibilities, all over again. He first introduced his son to simple sets before they ventured off into instruction-less territory – coming up with their own ideas. “There is this great ability to create and design stuff with LEGOs,” said Nelson. “Last year we started building our own things. We liked the idea of creating places we had been.”

He started employing the help of an app called Stud.io to create designs, then integrated it with BrickLink, which provides a list of the needed parts for the design.

“It’s super easy to get hooked into this stuff,” said Nelson. “There are sellers from all over the world who sell old LEGOs, sell parts individually. Christian helps me find parts in totes and containers before we see what we’ll need to order.”

Their first Door County scene featured a cozy hotel room complete with a fireplace and plate of cookies inspired by Bridgeport Waterfront Resort in Sturgeon Bay – where they often stay on their Door County vacations. Then they created a spa. “My wife loves to go to the spa when we come up,” said Nelson. They also love stargazing in Door County, playing hockey at the Teresa K. Hilander Ice Rink in Sister Bay, strolling along the Egg Harbor Marina at sunset, taking in a movie at the Skyway Drive-In Theatre in Fish Creek. “So we had two, then three, then four, then eight Door County scenes. I said, ‘Let’s make a goal of it.’”

They set up social media accounts and called their project Door County Bricks. Their current goal is 36.

(Left to right) Kris, Christian and Cindy Nelson have vacationed in Door County for the past 10 years. These vacations inspired father and son to create their own Door County LEGO scenes. Submitted.

While other LEGO fans create elaborate cities and worlds that consume their entire basement, Nelson’s home north of Chicago is quickly filling with various Door County scenes instantly familiar to any resident or regular visitor:  Al Johnson’s Swedish Restaurant complete with goats on the roof, a cherry tree orchard, the Door County welcome sign on the county line, Sister Bay Bowl, Cana Island Lighthouse, and more. “Part of the challenge is finding room for it all. Our space is filling up fast,” said Nelson. “We have to figure out a bookcase or bookshelf soon.”

Once they started posting their creations on Instagram they discovered a huge LEGO community. “It’s easy to get inspired by that,” said Nelson, who recommends LEGO to anyone looking to add a bit of creativity to their life. “Start with smaller projects, have fun with actual bricks in hand, and then start to think bigger. I think there’s a lot of inspiration online. We often use Instagram and Pinterest to search for different design ideas or projects.”

He also recommends you share the experience. “Having someone else to build with, whether it’s a son, daughter or a sibling, really adds to the enjoyment,” he said. “Being able to share your creations with others and see their ideas too is a big part of the appeal.”

Nelson isn’t quite sure what Door County Bricks will lead to, perhaps an e-based store, a coffee table book, a YouTube channel. For now, he enjoys sharing this experience with his son and celebrating a place they love through LEGO.

To meet more LEGO enthusiasts or try your hand at LEGO building, stop by the Brick Party by the Bay July 21 – 22, 10 am to 3 pm at the Sister Bay Village Hall. LEGO creations from various Wisconsin LEGO groups will be on display, including a life-sized goat, and there will also be a build-tent, games, prizes, music and refreshments. For more information visit cometosisterbay.com.