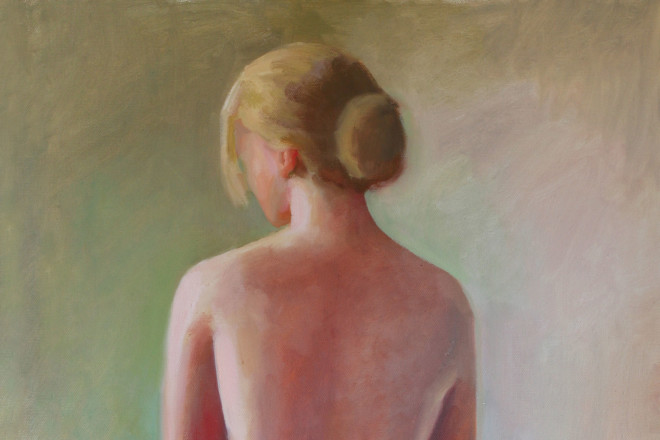 Soirsce Kastner grew up in a home filled with books – lots of them. Their topics covered anthropology, Chinese calligraphy, Mayan history, poetry and novels. They were sources of mystery and curiosity; their pictures stimulated her imagination. She still refers to those early inspirations in her work. 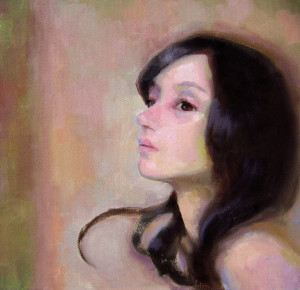 Soirsce was introduced at an early age to Carol Sills, an arts educator whose non-judgmental teaching methods focused on the process of creation rather than the outcome. By reading folk tales from different parts of the world, Sills encouraged her young artists to tell stories with their pictures. She never wanted the children to just draw a picture of something; she instilled in the children she taught a thoughtful narrative approach to art making, a model Soirsce still practices.

On her ninth birthday Soirsce received a card with J. W. Waterhouse’s “A Mermaid” on the front; the image captivated her. She researched Waterhouse and studied his pre-Raphaelite/Impressionistic style. His paintings are full of women, witches, nudes, allegory and storytelling, a perfect synthesis of Soirsce’s early lessons in descriptive images with her growing facility in drawing and painting.

Armed with this free approach to the making of art, Kastner’s first “adult” art class was a figure painting workshop at the Peninsula Art School when she was 11. Craig Blietz was the instructor for that first painting class, and has remained an encouraging mentor, especially during her time at the Kewaunee Academy of Fine Art (KAFA) where he currently serves as Artistic Director and instructor. From him she learned the value of the interactions of different colors that blend and make believable portraits.

She is still in awe of the fact that peach, pink and green are all elements of vibrant skin tones. Blietz has also encouraged her study of other figurative painters like Anders Zorn and Lucien Freud, of whom she says, “He paints incredible skin tones.”

The appeal of Zorn’s paintings derives from his distinct style, his different way of looking at a subject, and the pale peach skin tones of his plump nude women. She also likes his thick paint and mix of color, often referred to as the “Zorn Palette.” 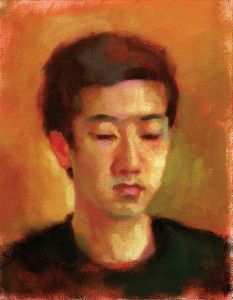 She finds John Singer Sargent’s use of paint an inspiration as well. After walking through almost the entire Art Institute of Chicago in search of the Sargent in their collection, she spent the next five hours studying the surface of the portrait entitled “Mrs. George Swinton.” Of that experience she says, “If you look at a little square, all you see is blobs of paint until you step back and it all works together.”

While continuing with the rigorous curriculum at KAFA, Soirsce was also following up with her early interest in Chinese written characters by taking Mandarin Chinese, studying the influence of Russian artists and arts education models the Soviets brought to the Chinese during the free-flow of information between the two communist countries in the late 1940s to mid-1960s. She followed her interest to Shanghai, where she set up a studio.

According to Soirsce, the art students in Shanghai are relatively young compared to those in other countries. The students must study hard; their studio work rigidly concentrates on honing skills in drawing, color theory and knowledge of materials. The concept is that in the future they will be able to paint in their own styles without having to figure out how to get the effect they are trying to achieve. This is much like young basketball players building “muscle memory” so that they can concentrate on game strategy.

While at KAFA, Soirsce had the opportunity to study with and model for Jove Wang, an honors graduate

of the China Academy of Art with a similarly rigorous curriculum. His work clearly demonstrates his mastery of oil painting and ability to capture light with thick impastos of color and texture – all interpreted in his own style. Other Chinese artists who have informed Soirsce’s work are Zhao Kailin, who is reminiscent of Vermeer, and Zhaoming Wu, who reminds one of Chardin’s diffused light or a less dramatic Caravaggio.

With 19 million people milling about 24 hours a day, the experience of living in Shanghai was very 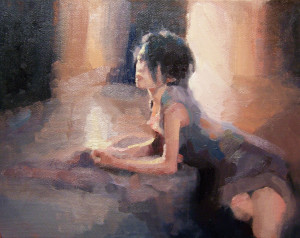 different than Soirsce’s Door County roots. When she tried to paint on location, a crowd of onlookers would assemble. Often they would stand almost touching her for very long periods of time, commenting on her paintings with running narrative. That was too distracting and intrusive to continue.

Fortunately, one nerve-wracking activity opened another artistic door. She could take photographs without drawing attention to herself. In the beginning, she took pictures of anything that looked interesting. Later the photos themselves became an art form for her, and an interest she shares with her husband Ping Wu.

She and Ping were married in Shanghai in January of 2009 and subsequently made the decision to move to Door County. Soirsce says she told Ping it would be entirely different than living in Shanghai; that the entire population of the county could fit into one downtown office building. (Fortunately, he finds living here a refreshing change.)

Like many 20-somethings, Kastner is adept with web searching, blogs and virtual galleries and has a considerable web presence. Featured in the second issue of Blue Canvas magazine, which started as an online arts community, she was startled to see the cheeky publication at a grocery store in Sturgeon Bay.

She tries to limit her social networking time to a day a week; being engaged with the web can become obsessive. She has, however, cultivated many online artist friends and, after a two-year correspondence, was able to meet a Filipino artist when he visited Shanghai. Being thoughtfully connected on the web has other advantages like the availability of attentive critiques and feedback by other artists. 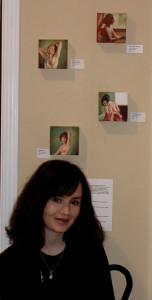 Since relocating to Sister Bay, Soirsce has worked mostly in smaller formats because “it’s hard to do a big painting when your studio is your bedroom.” At her mother’s store, Herbologie in Fish Creek, she has several works on display, including a series of 4” x 4” interrelated portraits. This series was inspired by an online reference by an artist who stretched himself by doing a painting a day, a project she may consider with a small group of like-motivated artists.

True to her storytelling beginnings, Soirsce has developed an interest in the Scandinavian fertility goddess, Iًunn (or Idunn). The goddess’s iconography includes references to apples, which represent fertility. One of the paintings on display at Herbology depicts Iًunn in an orchard, with her (easily recognizable) sister as the model for the goddess. Soirsce acknowledges her narrative paintings are much more labor intensive than the “painting a day” types.

Although, as she readily admits, her work evokes earlier styles of figurative painting, she uses very modern methods to work through problem solving in composition, color balance, and light and shadow when constructing a painting. Circumventing the traditional value sketch or numerous small paintings and sketches, she uses PhotoShop to work through ideas, cutting and pasting at will. “I can pull things around and play with them…there are all kinds of tools available.”

Soirsce’s “huge amount of pre-painting work” for the narrative paintings is accomplished through refined computer skills instead of myriads of traditional sketches and small oil studies. Her artistic output may be evocative of 19th century figurative masters, but the path to achieving her vision is totally 21st century.