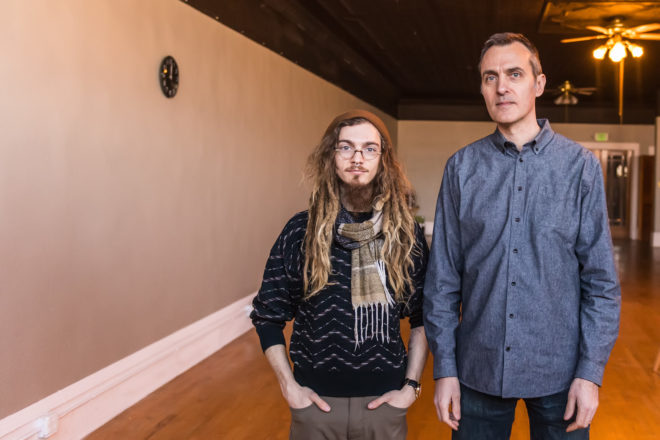 “Certainly there is a lot to enjoy just taking in one of these performances,” Jon Mueller, co-founder of the BEGIN music series, said. “But the idea is that by seeing some of these different types of practice live, in person, you can learn things from that experience to go apply to your own creative work or your life in general.”

This mission is what has driven Mueller and Door County native William Bradley, both musicians in their own right, to compile a lineup of experimental performers in the audio, visual and physical realms for the county’s newest music series.

Held in the upper level of The Artists’ Guild in Sturgeon Bay, BEGIN introduces Door County audiences to nationally and internationally recognized artists working in creative approaches to sound, instrumentation and performance. It launched Dec. 9 with cellist and Lawrence University jazz and improv professor Matt Turner.

Mueller is a drummer, percussionist and composer who has taken his unique brand of performances – described by audiences as intense, cathartic and meditative – to music festivals and venues throughout the world. He has performed solo at New York’s Solomon R. Guggenheim Museum, South by Southwest, and Musée des Beaux-Arts de Montréal, and from 1999 to 2009, owned the recording label and promotion company Crouton in Milwaukee.

The musician is a Door County newcomer, settling in Sturgeon Bay last fall, where he connected with local luthier, musician and artist William Bradley. Bradley grew up on the peninsula and shares Mueller’s innovative approach to sound, highlighted by his involvement with SOLLUS, a solar-acoustic ensemble that incorporates Bradley’s solar-powered electronic instruments as a means to explore sound.

The pair connected with their shared philosophy and almost instantly began exploring the idea of introducing a new music series to Door County. Bradley, whose parents own The Artists Guild, offered the building’s second floor as a venue – a historic, open space with enough room to accompany a variety of performances without losing the intimate audience-performer connection.

The duo’s approach to developing the series has largely been improvisational. Mueller knew the interest in seeing outside-the-box performances existed locally when he attended an October show by Norwegian jazz quartet Cortex at the Holiday Music Motel’s Tambourine Lounge.

“I was as interested in seeing the band for my own interests as I was to go and just see who the audience was,” he said. “…I knew that that audience wasn’t like, ‘Oh, Cortex is in town! Saw them last time they were here. They were awesome.’ I think it was more, ‘What is this about? Let’s go see this. This sounds really interesting,’ and that is what gave me hope.”

The lineup for BEGIN’s inaugural year is drawn from the organizers’ personal connections. On Jan. 27 at 7 pm, they welcome collaborative dance artist Margaret Paek and improv cellist and composer Loren Dempster as they explore the specific spaces of the venue through movement and sound. On Feb. 17, composer Ken Vandermark and percussionist Phillip Sudderberg push the limits of jazz and improvised music.

Performers are given few limits on their BEGIN performances, and audiences are encouraged to come with an open mind to hear or see sometimes improvised, sometimes composed but always fresh approaches to sound and movement.

“It’s not about being weird or being different,” Mueller said. “It’s about, how can you change your way of thinking about something in a positive way? How can you look at your world or the world in general differently? How can you see outside your box and be like, there’s all sorts of other ways I can be doing what I’m doing or think about the stuff that I think about. That’s really important.”

For more information and an updated performance schedule, visit rhythmplex.com/event-directory or find Rhythmplex on Facebook.