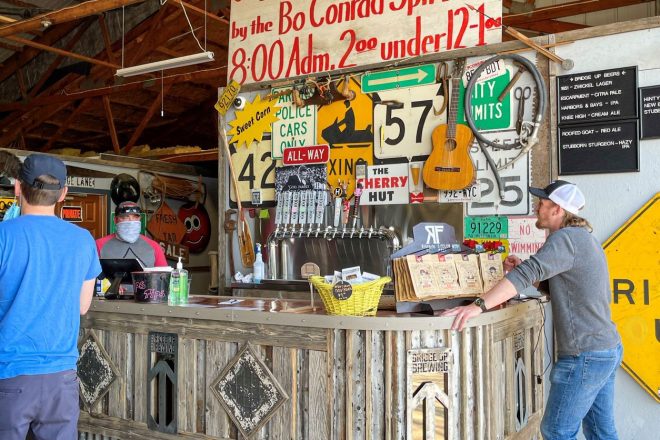 Trent Snyder opened the outdoor bar at The Cherry Hut this spring and had greatly expanded its outdoor seating by summertime. Photo by Andrew Kleidon.

Craft breweries across the nation certainly felt the effects of COVID-19. Restrictions and precautions affected nearly every aspect of the “craft beer life,” from sampling and flights, to brewery touring, to socializing in taprooms. This sudden change forced breweries to examine their business models to find room for change, or to focus on what they already had in place.

For my last column, I spoke with brewers at Hacienda Beer Co. and Bridge Up Brewing about their initial adaptations to the pandemic. This time, they told me how last year allowed them to narrow down a few of the aspects they felt best represented their businesses.

When “business as usual” flew out the window, Door County Brewing Co./Hacienda Beer Co. (DCBC/HBC) had to figure out different ways to deliver its products to customers.

He and his team started using the online platform biermi, which allows customers to purchase beer online and then pick it up at the brewery. This new tool proved to be extremely useful, and it was something Sampson said the brewery should have been using a lot sooner.

When winter reached the county and COVID-19 precautions stayed in place, the Baileys Harbor brewery again had to be creative to bring in revenue. The little building out front, which had previously been Bearded Heart, sat empty all year. With a little holiday and living-room décor, it became a cozy room called the Guest House, which small groups could book to safely gather away from crowds throughout the winter.

For Trent Snyder, head brewer and general manager of Bridge Up Brewing in Sturgeon Bay, taking advantage of outdoor space became essential. He added lots of outdoor tables and chairs, which allowed customers to safely visit and enjoy his beer while taking in the canal-front view. Snyder hopes to add even more tables next year.

In addition to working out of the lower level at Sonny’s Pizza, he opened an outdoor bar at the Door County Cherry Hut in Fish Creek, where additional seating was the focal point and greatly expanded the usable footprint of the market.

But Creativity Can’t Solve Everything

Although creativity can go a long way, some COVID-19-related issues – such as a can shortage – were simply outside of a business’s control. As I said in my last column, distributors had stopped taking kegs, and taprooms were closed. After breweries across the country had been stocking their product into cans all summer, the supply chain thinned out, and cans became harder to find.

Suddenly, DCBC received an email from its previous contract brewer saying it didn’t have cans and didn’t know when more would be available. At that point, Sampson and his team had to source their own cans.

One solution was to use cans that already had a label from another brewery printed on them and put their own label over the top. Hacienda Beer Co. uses 16-ounce cans, which made this a little more difficult, but Sampson persevered, saying the cans always seemed to show up just in time.

Bridge Up Brewing experienced similar issues with can shortages. Snyder recalled struggling to get cans, and even when they were available, they were more expensive.

In fact, everything was more expensive: labels, boxes and even keg collars and caps. There isn’t a lot that can be done when these issues arise except hand over the extra money, so packaging and distributing as much beer as possible became the most important goal.

Bridge Up Brewing hadn’t had time to gain a lot of name recognition before the pandemic, and with decreased taproom activity and fewer promotional events, Snyder shifted his focus to distributing to local grocery and convenience stores.

Although some breweries across the country and state saw closures and declines, our local brewers fared quite well. Whether it was because of their clever operational solutions, strong customer loyalty or both, we seem to have made it through, breweries intact.