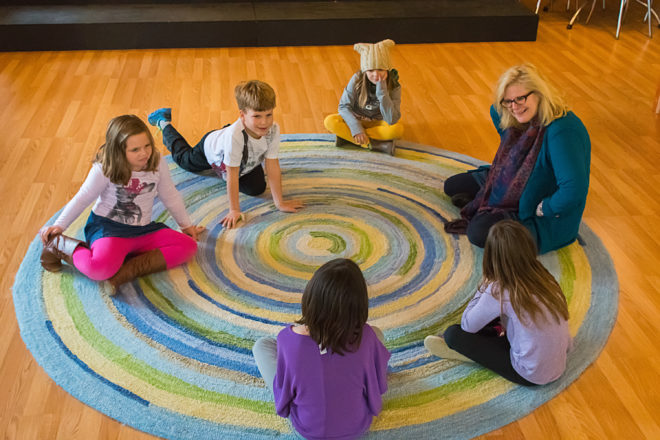 Two years ago, in a Pulse story about the two jobs she loves – teaching kindergarten at Gibraltar and directing the school’s musicals and one-act plays – Lizz Thomas also mentioned that she had a dream of establishing another opportunity to express her passion to help children find themselves and grow in self-confidence, character, communication and problem-solving through involvement in the arts.

Lizz knows from personal experience how enriching drama and music can be. It’s hard to imagine that this effervescent person was ever painfully shy, but as a middle-schooler in Manitowoc, she fainted dead away at the prospect of giving a speech in front of her English class. Sensing that participation in drama might be helpful in bringing Lizz out of her shell, the teacher suggested that she try out for a play. Although Lizz was sure this would be another disaster, she finally agreed and was cast in the lead. It changed her life and created a desire to help other youngsters experience the joy of embracing the arts.

Last winter, her long-time dream became reality with the opening of Crescent Studios in the Top of the Hill Shops in Fish Creek. From the very beginning, there were signs that it was meant to be.

A friend called to ask if Lizz knew of an organization that could use a lovely grand piano. Lizz did, indeed, know of such an organization, although it still existed only in her mind and, as yet, had no actual location.

She spent a lot of time walking by Studio B24, a corner site, flooded with light from two walls of windows, just the spot she’d dreamed of for her new school. It was perfect but even though it was vacant, the owner did not wish to rent it.

On the evening Lizz was to sign the lease on another shop she’d decided to rent, having reluctantly given up on Studio B24, her family came to see it. “You don’t like this space,” Devin, one of her three sons, said. “Don’t sign that lease. You’ve always told your kids to go after what we want. That other space is what you want. Go after it.”

A letter to the owner of Studio B24 and a subsequent dinner followed, where Lizz explained her passion for introducing children to music and theater and how she believed it would enhance the community. The owner was convinced and Crescent Studios had a home.

More than 30 children came to free introductory classes last January. A number enrolled in the first paid classes that began in February, and enrollment has grown steadily. Workshops in July and August were very successful, with 10 to 15 youngsters enrolled in workshops for K-5 students and those in high school. 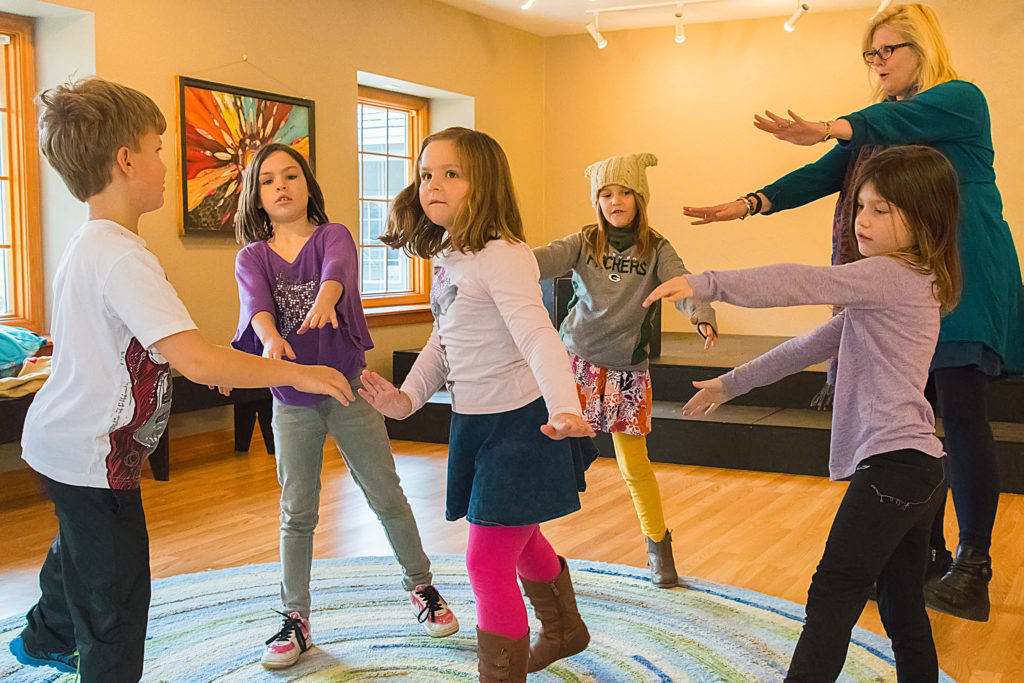 Lizz, who has directed 28 outstanding musicals at Gibraltar, will teach all the drama classes, as well as sessions in preschool creative dramatics for children 3½ to 5 from 9:30 to 10:15 on Saturday mornings. (Her 32 years as a kindergarten teacher and a degree in early childhood education have provided lots of insight into working with this age group.)

A voice professor from the University of Wisconsin – Green Bay, two piano teachers and a guitar teacher are available for private lessons by appointment. Lizz is delighted that a number of her former students at Gibraltar have shown up at Crescent Studios for advice, encouragement and private sessions. During the summer, she helped a young boy prepare to audition for a part with a professional acting company, made the studio available for the debut of a one-act play written and acted by a former student, and told a young woman that the talk she had prepared for a national campaign was powerful just as she had written it.

Lizz would love to arrange an evening of theater games for adults. She’d also love to offer opportunities to women who have always wanted to learn to play the piano or take singing lessons.

“I want to find that creative impulse in every person,” she says. “Each time you tap into your creativity, it changes your world. Even if you’re not as good as you would like to be, it changes something.”

She’d like the studio to eventually become a small performance center – perhaps a venue for the children’s stories and plays she has written that used to be performed at the old Open Door Theater.

Another dream is to share with other teachers what she learned through work on her master’s degree in curriculum instruction with an emphasis on integrating the arts, which is her passion. “I feel like I’m an umbrella, bringing in all these people,” she says.

The name for Crescent Studios was inspired in part by the Crescent Orchards her husband’s family used to own in Sister Bay. It is also a reflection of her fascination with celestial things. “What I love most,” she says, “is the night sky in Door County.”

On opening night of every musical she’s directed at Gibraltar, Lizz has given each member of the cast and stage crew a glow star, telling them, “We’re going to shine together like a constellation.”

It’s no accident that the motto of Crescent Studios is: Open the Door to Creative Expression and Reach for the Stars!