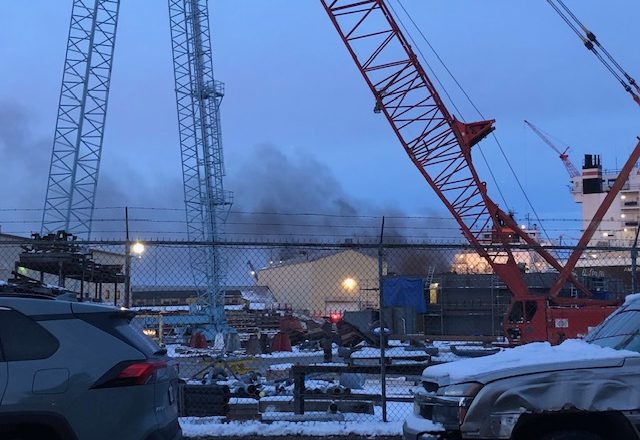 Emergency responders used more than a million gallons of water to safely put out the fire that caught early Monday morning on a bulker docked in winter layup at Fincantieri Bay Shipbuilding in Sturgeon Bay.

It would be many hours after the initial dispatch at 1:38 am Monday before crews finished at the berth of the Roger Blough, an 858-foot, self-unloading iron-ore bulk carrier. Only one minor injury resulted from the fire, according to Sturgeon Bay Mayor David Ward.

The smoke still billowing from the ship as dawn broke had stopped around noon. Dietman said it took approximately 1.4 million gallons of water to extinguish the fire.  The Sturgeon Bay Fire Department led the firefighting efforts, with assistance pouring in from departments across the peninsula.

The cause of the fire is under investigation by the Sturgeon Bay Fire Department, United States Coast Guard and National Transportation Safety Board, Dietman said. No other information will be released until that investigation is complete.

The Blough is part of Keystone Shipping Company’s Great Lakes Fleet. Representatives from Keystone Shipping, located in Bala Cynwyd, Pennsylvania, were on the scene in Sturgeon Bay Monday. The company said in a statement that there were no injuries to the crew and that it was fully cooperating with the United States Coast Guard to assess the damage and determine the cause. The company also thanked the emergency responders for their hard work and support throughout the incident.

The vessel, named for the former chair and CEO of the United States Steel Corporation, has had another fire in its past. The vessel was christened in early June 1971, and later that month, a fire broke out on board that burned for 19 hours, killed four people, wounded 20 and caused $10 million in damages, according to historic reports.

The Maritime Executive, reporting on Monday’s fire, said the Blough is also remembered for its role in the aftermath of the famous Edmund Fitzgerald disaster. The Fitzgerald went down in a storm Nov. 10, 1975, and the Blough was one of the first “good Samaritan” vessels engaged in the search effort after the sinking.