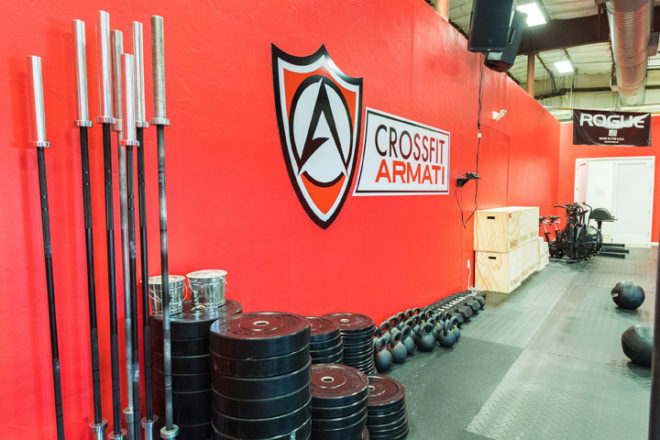 Door County residents will now have a local CrossFit center at their fingertips as CrossFit Armati opened its doors April 10. Owner and area chiropractor Derek Grenfell is excited about a new fitness opportunity for the area.

“The response to CrossFit Armati has been overwhelmingly positive,” Grenfell said in regard to activity on the gym’s Facebook page and word of mouth in the community. “The residents of Door County have been eagerly waiting to see exactly what we are doing in this facility.”

Grenfell and his wife moved to Door County in 2014 when he opened his chiropractic office, Elite Spine & Sport. He had been a CrossFit enthusiast for several years and once he settled in with his chiropractic business, he set a personal goal to open a local CrossFit gym of his own.

“Opening CrossFit Armati has been a vision I’ve had for the past few years. I fell in love with CrossFit while I was in graduate school working on my chiropractic degree and I knew when I arrived with my family in Door County that a CrossFit box was needed,” he said.

CrossFit Armati’s 2,500 square-foot facility is located near Grenfell’s Elite Spine & Sport on Sturgeon Bay’s west side. In addition to his Doctor of Chiropractic degree, Grenfell is certified as a Performance and Corrective Exercise Specialist as well as a CrossFit Level I trainer.

He sees a relationship between CrossFit and chiropractic care. He felt the need for a functional rehabilitation center to send his chiropractic patients when they were discharged from his care.

“My approach to chiropractic is built upon the foundation of movement quality,” he said. “Much of my time spent with patients in the office consists of finding breakdowns in movement patterns that cause stress, wear and tear on joints and then correcting that. Those exercises are made up of functional movements, which are also the foundation of CrossFit. It is a natural progression for my patients to transition from physical rehab to CrossFit.”

According to CrossFit, Inc.’s website, the CrossFit regimen was developed over several years by its CEO, Greg Glassman, and was officially founded in 2000. It has been said to include more than 13,000 affiliated gyms, with approximately half of those located within the United States.

CrossFit Armati’s website states: “CrossFit is the principal strength and conditioning program for many police academies and tactical operations teams, military special operations units, champion martial artists, and hundreds of other elite and professional athletes worldwide…it has evolved to be an all-inclusive fitness program for people of any athletic capability.”

Grenfell added, “There are several aspects of CrossFit that make it so appealing. One being the focus on movement quality and functional movements that allow for universal scalability, meaning everybody can do the same workout, but with a unique spin based on each person’s abilities and limitations.”

A key aspect of the gym is assisting members in setting goals and tracking their progress. 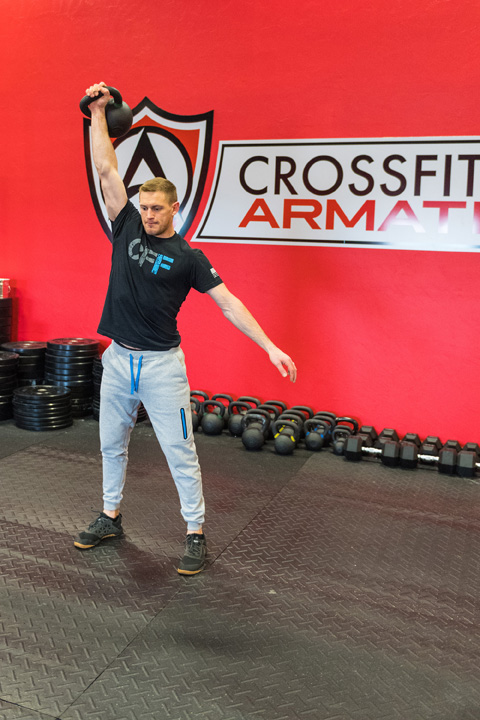 “Everything we do in our gym is measureable,” he said. “You will be able to track performance and have goals to achieve in the future.”

Despite having dozens of affiliated CrossFit gyms throughout Wisconsin, before the opening of Sturgeon Bay’s CrossFit Armati, the nearest CrossFit centers for Door County residents were located in Green Bay, making for a lengthy commute for local CrossFit devotees.

“There are several residents here that regularly drive daily to Green Bay to get their workouts in and they are excited to gain a couple hours back in their day,” he said. “We have had people from the Chicago, Milwaukee and Madison areas reach out to let us know that when they come up here for their summer vacations they will be dropping in for their workouts.”

CrossFit Armati aims to empower its members to equip themselves both physically and mentally. Grenfell chose the Latin word, “Armati,” meaning, “equipped, armed, reinforced,” as the underlying theme for his gym’s fitness approach. He is hopeful the new facility will generate an interest in fitness among Door County residents of different ages and skill levels.

“My goal is to have a facility that offers a training experience like no other,” Grenfell said. “One where people can regularly redefine their limits and push the boundaries on what they think is possible.”

CrossFit Armati offers classes for those who are new to CrossFit, known as the “foundations course” that aims to prepare members for the CrossFit program. Additional classes are offered in mobility, elite nutrition and personal training. Certified coaches and trainers are on hand to provide “safe, effective, and efficient” workouts for their members.

“Probably the most important aspect of CrossFit is the community … that becomes like family, supporting one another when we struggle and also celebrating victories and achievements,” Grenfell concluded.

Weekday classes are offered, beginning at 5:45 am and continuing until 6 pm. A free class is available on Saturdays from 9-10 am. For more information visit CrossFitArmati.com.