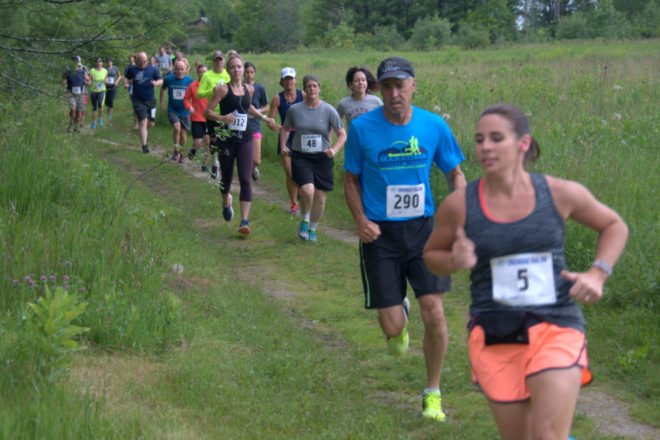 Runners and walkers of all ages take to the trails during the 2017 Crossroads Trail Run. Photo by David Harsh.

When COVID-19 started to change the road-race scene as runners had known it, race organizers got creative, employing staggered starts, capped entries and virtual runs. The Crossroads Trail Run/Walk was no exception.

“Last year, because of COVID, [the race] was done completely virtual,” said Laurel Hauser, Crossroads at Big Creek’s executive director. “Participants ran their own race and kept track of their own time, whether they ran here at Crossroads or wherever they were.”

This year, the 12th annual fun run/walk is bringing people together again for the main event on June 19. But organizers also plan to retain some aspects of the virtual version of the race that, although initially employed for public safety, also made the race more accessible to runners near and far.

“This year it’s a hybrid format,” Hauser explained. “[Participants] can run the trails here, in person, with staggered starts and chip timing; or they can participate on their own between June 17 and 19 and then report the time and distance they ran.”

Those who choose to run on their own may still run the marked course at Crossroads, or they are free to create their own route near their home or somewhere else.

Hauser said the hybrid format offers the best of both.

“People can run in person if they want to, but this also lets us include people who live in, say, Connecticut, but still want to support Crossroads.”

Race director and founder Gretchen Schmelzer said that some of the feedback and photos organizers received from those who participated in the 2020 virtual event made them excited to include out-of-town participants again this year and maintain those long-distance connections.

“Last year, we had people send photos from their virtual run in the White Mountains in Maine,” Schmelzer said. “It was fun to expand the Crossroads community like that.”

In addition, Schmelzer said, “We’ve heard several comments of, ‘We’re so glad you’re going live,’ and we are, too, but the nice thing is we also have plenty of space at Crossroads for people to spread out. We want to take into account the varying degrees of what people are comfortable with.”

The fun run/walk features 2K, 5K and 10K options. Local participants may pick up their T-shirt, native sapling and Crossroads’ Crazy-Good Granola at the finish line; or through “curbside service” June 19, between 8 am and 12 pm, at the Collins Learning Center, 2041 Michigan St. in Sturgeon Bay. Early pickup is also available Friday, June 18, 5-7 pm, at the Collins Learning Center.

Visit runsignup.com/Race/WI/SturgeonBay/CrossroadsTrailRun to register for the event or find out more.

Recycle Your Running Shoes at the Crossroads Trail Run

Do you have running shoes that have run their last mile? Donate them before or during the Crossroads Trail Run on June 19. The worse-for-wear shoes will be used for playground resurfacing, and those in gently used condition will be donated to those in need. Place the shoes on the shoe tree in front of the Collins Learning Center, 2041 Michigan St. in Sturgeon Bay, between June 17 and 19.