The day is sunny and mild as I write this, and my thoughts take me back to when I was about 15 years old and a student at Kewaunee High School. I commented to my Dad at home that the windows at school were open, the sunlight was streaming in and the crows were on the wing and cawing, making it awfully difficult to study. His comment was, “Do you suppose the crows are smarter than you?” That thought has remained with me over the years.

Who doesn’t know a crow? Even people who claim absolutely no interest in birds usually can identify a crow and a seagull as clearly as black and white. In fact the crow, one variety or another, may be the world’s most familiar bird. About 30 species inhabit practically every piece of land with the exception of Antarctica, New Zealand, several oceanic islands, and the southern portion of South America. 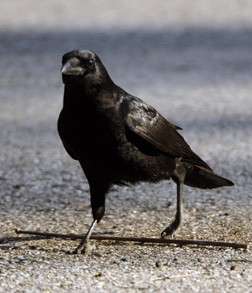 Crows love to eat the cracked corn scattered on our driveway.

Depending on where you live in the world, you will soon get to know either the Common, Carrion, House, Jungle, Black, Fish, Hooded or other crows. All will exhibit the uncanny ability to coexist with man in spite of the relentless fight against them that includes bombing, trapping, shooting, dynamiting and poisoning.

Quite a few studies through the years have proven that in nearly all cases crows do far more good than harm. Some farmers who have lost sprouting corn will argue this point. Duck hunters who saw crows robbing eggs from duck nests will forever be against these coal-black marauders, and the backyard birdwatcher who observed one of the big black “bullies” empty a robin’s nest will curse every last crow they see.

Several years ago, during the spring season, three crows visited our bird suet feeders frequently and emptied them before the end of the day. We were amused at first to watch a large clumsy crow figure out ways of perching on a chicken-wire feeder designed for small birds and adeptly remove one cube of suet after another. The price of beef suet soon dampened our outlook toward the crows’ daily visits.

Henry Ward Beecher, famous U.S. clergyman of the 1800s, made the statement to the effect that if man could be feathered and provided with wings, very few would be clever enough to be crows! Anyone who has had a pet crow, downright mischievousness in many ways, surely will agree to this claim. Point a gun at a nearby crow and he will scream to his brethren as he leaves the scene in haste.

In a few weeks there will be a lot of learning going on in the crows’ world. The young will have left the nest, about five weeks after the eggs were laid, and, according to many stories I have heard and read, will be on the receiving end of many lessons in “wilderness” survival.

In spite of their being so widespread, the crows tend to invariably be near the activities of man. Agricultural clearings for crops, as well as woodlots and tree plantings have helped the total crow population reach its greatest numbers in history. Such has been true of red-winged blackbirds, grackles and perhaps even the crow’s cousin, the blue jay. They all are very compatible with people.

Quite a few birds will not tolerate a crow in their breeding territory and, even though considerably smaller than the cunning crow, do not hesitate to give chase. We have frequently observed blackbirds dive-bombing the much larger bird, swooping and trying to peck the bird repeatedly, often leaving us with the feeling that at any minute they would land on the crow’s back.

The crows’ archenemy aside from man, is the owl. Literature states that night roosting crows sometimes fall victim to several species of owls, especially the Great Horned Owls. Slow-moving baby crows would obviously be easy prey for owls, too. 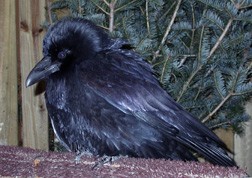 The Common Raven has a heavier beak and larger head than the American Crow.

Some of the most treasured experiences of my boyhood were the times when my buddy Tony Kotyza and I stalked a frenzied flock of crows busy harassing an owl. The woods in which we accomplished this were very hilly, enabling us to carefully crawl on our bellies to the top of a hill to find the exciting “battlefield” spread before us. Never did we see a crow come really close to the owl, but rather make a continuous racket, scaring the owl half to death, or so we thought.

A crow’s voice is not exactly musical, but at the same time is very recognizable and strong. Much study of its versatility has been made leading to the development of effective recordings, such as the rallying call which attracts crows to the concealed gunners rather than the small band of mobbing crows the eventual victims think they are joining.

The researchers found that crows throughout the world have varying vocabularies. American crows have different alarm calls, for example, than French crows.

Pet crows that Carl and Ruth Scholz had at The Farm in past years, added to their amazing “ark” of other animals, taught young and old alike a lot about the crow’s size and unusual habits. Most people are quite amazed, when seeing a crow at very close range for the first time, at how big a crow really is.

The question arises, how can one differentiate a raven from a crow from a distance in that both are quite large and black? A raven has five inches of extra length over a crow, but that doesn’t make identification that much easier. However, look closely at its tail while the bird is in flight. The crow’s tail is quite square-ended (with a slight amount of rounding), while that of the raven is wedge-shaped. The low guttural voice of the raven also is quite unmistakable.

Some of the experts claim that a raven has one more pinion (main end feather) in its tail than a crow. In other words, when you see a large black bird flying at a distance, whether it’s a crow or a raven is only a matter of “opinion!”

In spite of the crow’s unpopularity with gardeners and farmers, you simply have to admire this controversial but fascinating bird.