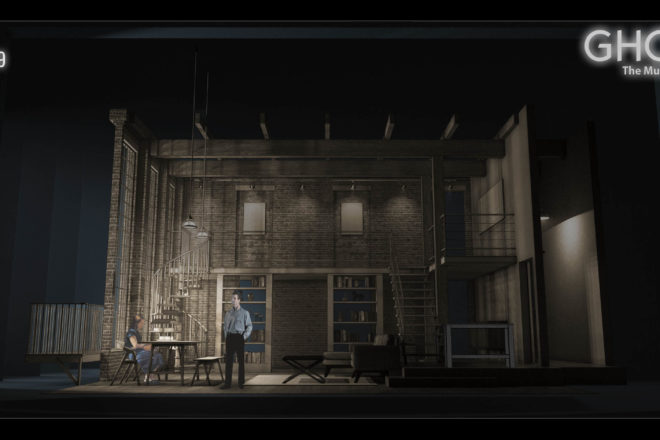 Scenic designer Jeff Kmiec uses storyboards like this one to convey his concepts to the rest of the Peninsula Players creative team for its production of “Ghost The Musical.”

On July 31, Peninsula Players Theatre will open Ghost The Musical, based on the 1990s film by Bruce Joel Rubin. The romantic and heart-wrenching film starred Demi Moore, Patrick Swayze and Whoopi Goldberg. Ghost The Musical was first adapted for the stage for London’s West End in 2011 and made its Broadway debut in 2012. In 2016, it was reshaped into a more intimate version with a smaller cast in a coproduction with The Fulton Theatre in Lancaster, Pennsylvania, and Maine State Music Theatre in Brunswick, Maine.

Ghost The Musical is one of many works that have been adapted to the stage.

Shakespeare, who adopted tales into plays, is the most filmed author in any language. The Guinness Book of Records lists 410 feature-length films and television versions of his work, with his earliest film credit being King John in 1899.

Last year’s Tony Award winner for Best Musical was The Band’s Visit, which also earned Tony Shalhoub (star of the Door County film Feed the Fish) a Tony Award for Best Actor in a Musical. It was inspired by a 2007 Israeli film. The 1982 novel The Color Purple was first adapted to film in 1985 and then into a Tony Award-winning musical in 2006. The Full Monty was first a film, produced in 1997, before it was adapted into a musical in 2000 and a play in 2003.

Whether one appreciates the aesthetic of turning the pages and creating visual images in the imagination, or being engrossed as an audience member by the craft of the filmmakers or stage artists, generation after generation, good stories continue to enthrall, inspire and captivate.

The film Ghost first entranced moviegoers in 1990 and had audiences believing in the endless power of love. It follows the story of Sam and Molly, whose romance takes a shocking turn after Sam’s unexpected death. Trapped between two worlds, Sam refuses to leave Molly when he learns she is in grave danger.

Twenty years after the film’s success, Rubin was approached by producers about adapting the story into a musical. He agreed to write the book, and multi-Grammy-winning pop-music icons Dave Stewart and Glen Ballard were enlisted for the music and lyrics.

Stewart is best known for his partnership with Annie Lenox of The Eurythmics. Ballard, an American songwriter, lyricist and record producer, is best known for cowriting and producing Alanis Morissette’s 1995 album Jagged Little Pill.

In the Lancaster Online, Rubin said he originally did not want his story turned into a Broadway show.

“I fought it for years,” he said. “The movie succeeded in the way I wanted it to. The story touched a nerve with people.”

Maine State Music Theatre (MSMT) and The Fulton Theatre’s retooling of Ghost returned intimacy to the story, and Rubin loved it.

“It has shifted into something other than what it was, but it is so right,” he said. “It’s a rebirth.”

Marc Robin, The Fulton Theatre’s executive producer, helped to reshape the musical. He directed the musical Dames at Sea for Peninsula Players in 2002 and moved to Lancaster in 2005 after spending almost 24 years working in Chicago. Curt Dale Clark danced and sang in the 1991 Peninsula Players production of The Best Little Whorehouse in Texas and is now MSMT’s artistic director.

“I love the story and the music,” Robin said, “and with this version, we could go back to theater magic. Sometimes shows have so much packaging, you don’t see the story. Look at The Color Purple. It was a huge show, but they brought it back as a chamber piece. Strip everything away, and if what’s underneath is good, the story will shine.”

“At its heart, Ghost The Musical remains a beautiful love story featuring a couple very much in love,” Vinkler said. “But it’s also a thriller with a supernatural twist that has some enormously funny comic moments. It’s absolutely wonderful storytelling.”

Ghost The Musical is at Peninsula Players Theatre July 31 through Aug. 18. To purchase tickets or learn more, call the box office at 920.868.3287 or visit peninsulaplayers.com.

Audra Baakari Boyle is the business manager for Peninsula Players Theatre and is celebrating her 25th season with Door County’s theatrical treasure.

The Peninsula Arts and Humanities Alliance, which contributes the Culture Club column throughout the summer season, is a coalition of nonprofit organizations whose purpose is to enhance, promote and advocate the arts, humanities and natural sciences in Door County.